How do Israel’s protests impact the Middle East? -analysis

Israel’s recent protests showed that large numbers of people care about the rule of law - if successful, they can inspire people across the region.

The ongoing protests in Israel, as well as the court ruling forcing Prime Minister Benjamin Netanyahu to dismiss Arye Deri (Shas) as minister, have been of interest to the Middle East due to the democratic nature of protests. This isn’t 2011, there is no interest in another “Arab spring,” and Israel’s politics are far removed from the region.

In fact, the protests may have a very low-level influence in the region. In Turkey, the ruling AKP Party has scheduled elections for May. However, it is an authoritarian ruling party that has jailed its opponents for “insults” and closed most independent media outlets. Interestingly, it has also worked to reconcile with Israel in the last year.

Turkey’s current politics hold some commonalities with the Jewish state. Ankara has also become more religious and more right wing. Additionally, Turkey’s ruling party has also been accused of trying to hijack democratic institutions, including the judiciary and the media.

Are the protests an inspiration?

Is it possible that Israel is an inspiration for Turkish voters? Considering that the Right has returned to power after a year, it’s plausible that opposition parties in Turkey know that even if they can unseat the AKP from its two-decade rule, the overall processes in Ankara favor the far Right.

On the issues of religious nationalism specifically, and in other issues generally, the centrist or Left-leaning secular politicians and groups are declining in influence. Israel’s protests have shown that the Center and Left can galvanize people and get them onto the streets but, like Istanbul’s Gezi Park protests in 2013, their long-term impact remains unclear. 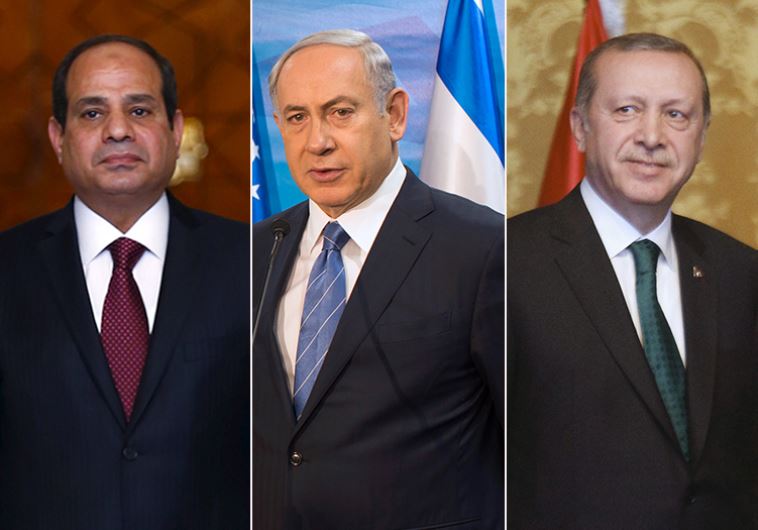 Of interest is the fact that some commentators who closely follow what happens in Turkey also tend to sympathize with the Center and Left in Israel; a strange irony for those who back the AKP in Turkey and adore authoritarianism and the religious Right in Ankara but prefer its opposite political manifestation in Jerusalem.

The media in the Gulf, though, have paid attention to the protests, expressing concern about the status quo there and in Jerusalem, Amman and Cairo. Israel’s peace partners found others in the previous government, though that does not mean they do not have partners in the current one.

Netanyahu is a known quantity in President Abdel Fattah el-Sisi’s Egypt and in Jordan, as he is in the Gulf. However, while these countries can enjoy close security ties with Israel under a right-wing government, they are still concerned about the impact this may have on Palestinians and peace issues. That means they are looking to the protests to see what changes might be coming and whether the court system in Israel will continue to be an objective force.

FURTHER AFIELD, the Iranian-backed axis – which includes Hamas, Hezbollah and militias in Syria, Iraq and Yemen – may see the protests as an opportune time to take advantage of Israel’s attention being spent on domestic politics.

The more Israel is focused on domestic politics, the more Iran has a way to make inroads to threaten it or raise tensions in Gaza and the West Bank. Generally, Tehran and the extremists it backs in the West Bank and Gaza benefit when Israel has a more right-wing government; they thrive off pushing the Palestinians into a corner to make them fight Israel on behalf of the Islamic Republic.

That being said, Palestinian Islamic Jihad was also more active in clashes in the West Bank over the last year when Israel had a more centrist government, while weapons-trafficking has become a major threat in Jenin and Nablus.

Iran will be watching the political chaos in Jerusalem carefully, as any chance to sound the bells over al-Aqsa Mosque or something else will be in Iran’s interests.

Other countries in the region may see the protests as relevant as well. There are ongoing controversies in the region, whether in Tunisia, Morocco or Lebanon. Protests tend to have regional ramifications because people are swayed by mass demonstrations, whether they identify with the causes or not. When they see that protests are successful, it can inspire them; when they see they are not successful, they draw lessons.

Israel’s massive protests in the last weeks have shown that a significant number of Israelis care about the rule of law and are concerned about the current government’s squandering of that law. Others in the region have similar concerns about their own governments, whether because of protesters in Iraq, Iran or elsewhere. The only difference is that in most countries in the region, protests are usually brutally suppressed.