King Al Khalifa meets with New York-based rabbi in the royal palace in Manama in order to discuss regional concerns in the Middle East. 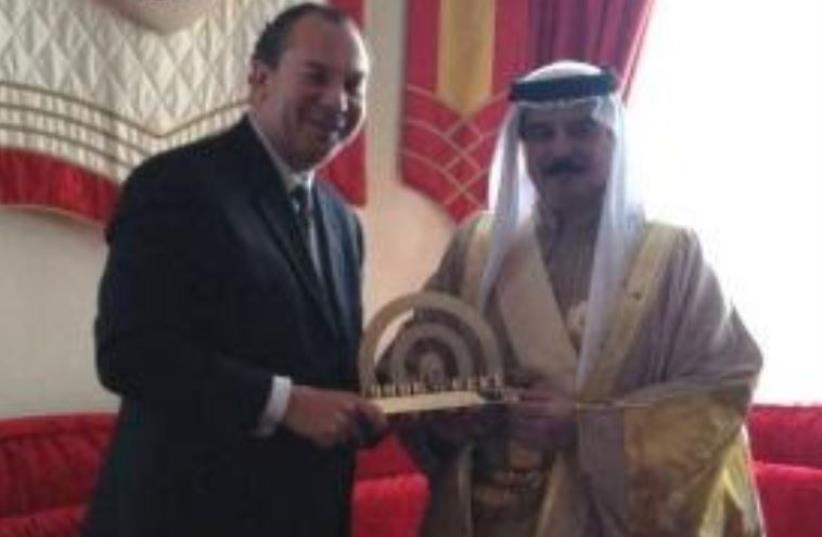 The meeting between Rabbi Marc Schneier and King Hamad Bin Isa Al Khalifa took place at the Royal Palace in Manama, Bahrain on Wednesday March 2, 2016
(photo credit: Courtesy)
Advertisement
The king of Bahrain has reportedly recommended that the recent designation of Hezbollah as a terrorist organization by the Gulf Cooperation Council be taken up by the Arab League as well.Hamad bin Isa al Khalifa, head of the tiny island nation, has been one of the most ardent proponents for labeling the Lebanese group as a terrorist organization as part of efforts to fight back against growing Iranian hegemony in the region.Hezbollah has been funded and supported by Iran for many years and is a key ally of Syrian President Bashar Assad, fighting against the anti-regime forces in the country.The six-member GCC formally labeled Hezbollah as a terrorist organization on Wednesday, which could lead to sanctions against the group and against businesses and other institutions associated with it.Rabbi Marc Schneier, a prominent interfaith activist and president of the Foundation of Ethnic Understanding based in New York, met with Khalifa in the royal palace in Manama in order to discuss concerns in the Middle East.Bahrain itself became the first Arab country to designate Hezbollah as a terrorist organization in March 2013 following unrest in the country among its majority Shi’ite population in the wake of 2011’s Arab Spring.Khalifa and the Bahraini government accused Hezbollah of supporting the unrest and even of training Shi’ite groups in the country to rebel against the Sunni monarchy and to carry out terrorist attacks in the country.During Scheier’s meeting with Khalifa, the king noted that there were one or two countries among the GCC who had wanted to distinguish between Hezbollah’s military wing and its political wing, although this was rejected.A compromise over the strength of the language was reached to accommodate different opinions in the GCC, which is comprised of Bahrain, Kuwait, Oman, Qatar, Saudi Arabia, and the United Arab Emirates.According to Schneier, who has met with Khalifa on two other occasions, the king told him he was advocating for the struggle against Hezbollah to be expanded as widely as possible in the Arab world, stating that the Arab League and its 22 members should take up this mantle and label the group as terrorists.Schneier himself noted that the shared enmity held by the Gulf states and Israel against Hezbollah and its Iranian sponsors should be seized as an opportunity to create an alliance with countries that have formerly been hostile to the Jewish state.“Iran is not only an obstacle but an opportunity for peace between Israel and Arab nations,” Schneier told The Jerusalem Post on Thursday after his meeting on Wednesday with Khalifa.“Both Israel and the Gulf states share a common enemy, so it’s the makings of a natural alliance, in terms of joining forces against the evil of terrorism, religious extremism and fanaticism.“It’s a real opportunity and a silver lining in the dark cloud of terrorism. The Gulf states recognize Israel as an ally against Iran, and its ability to stabilize the region and support moderate Arab countries, so this could be a game changer in the geopolitical climate of the Middle East.”Schneier added that Khalifa has also said during their meeting that in his opinion it is just a matter of time before some Arab countries begin opening diplomatic ties with Israel.Khalifa also stated that the balance of power in the Middle East between moderates and extremists depended on Israel and that the Jewish state had the power to defend not only itself but the voices of moderation and the moderate Arab states the region.