Their "You Stink" protest campaign was mobilized after the government failed to solve a crisis in trash disposal, leaving piles of refuse rotting in the summer sun. 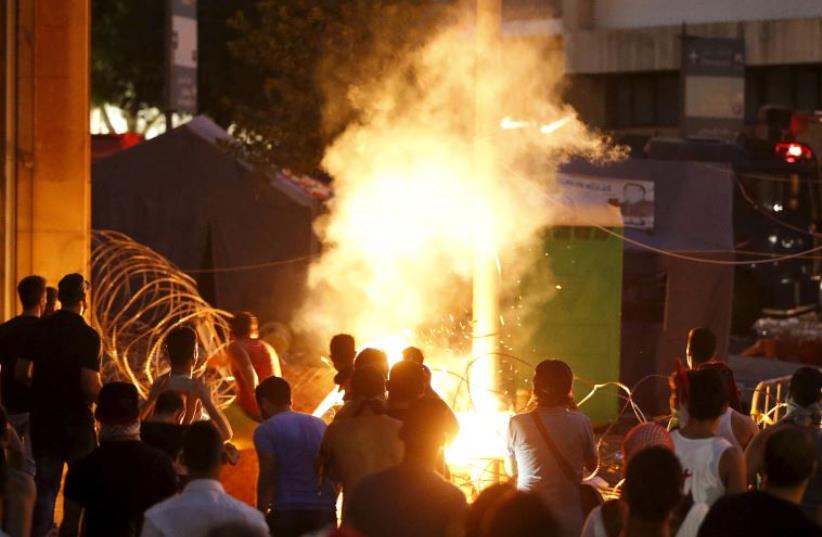 Protesters start a fire during a protest against corruption and against the government's failure to resolve a crisis over rubbish disposal, near the government palace in Beirut, Lebanon August 23, 2015.
(photo credit: REUTERS)
Advertisement
Thousands of protesters waving Lebanese flags and chanting anti-government slogans converged on a square in central Beirut on Saturday for a rally against political leaders they say are incompetent and corrupt.Similar protests descended into violence last weekend and Prime Minister Tammam Salam threatened to resign, a move that could tip the state struggling with political deadlock and spillover from Syria into deeper turmoil.Protesters, including families and people of all ages marched, played music and sang as they headed towards Martyrs' Square overlooking the sea. Security forces have installed additional barricades and barbed wire.A group of protesters chanted 'revolution' as they walked among the crowd waving flags. "People want the downfall of the regime" chanted another group, employing the slogan of protest movements that shook the Arab world in 2011. The national anthem played and protesters sang along.Their "You Stink" protest campaign was mobilized after the government failed to solve a crisis in trash disposal, leaving piles of refuse rotting in the summer sun.It has been widely described as the biggest protest movement in Lebanon's history organized independently of the sectarian parties that dominate politics.Amnesty International said on Saturday Lebanon should investigate allegations that security personnel used excessive force to disperse protesters in Beirut last week, calling for restraint ahead of the new rally.Protest organizers blamed last weekend's violence on "infiltrators" linked to political movements. Security forces last week fired water cannon and tear gas at demonstrators, some of whom threw stones and sticks at riot police.Amnesty, quoting figures from the Red Cross, said at least 343 people were treated for injuries and 59 more were hospitalized last week.Campaigners are calling for the environment minister to resign, for snap parliamentary elections and a resolution to the garbage crisis. They also want better public services in a country with daily electricity cuts and summer water shortages."We are asking since last week for the defeated and poor Lebanese people, and those who need work and medical services, to join us today in this protest," activist Khaldoun Jaber said, after camping out overnight in a square near the government headquarters. "Maybe we can achieve the Lebanon we dream of."One protester held aloft a sign showing pictures of leaders of six of the main Lebanese factions reading: "We will not elect you again, and all of you means all of you."Another sign read: "You failed in running the country, you failed in running worship, you succeeded at theft and corruption."The garbage crisis has exposed wider political deadlock in Lebanon, where sectarian and power rivalries have been intensified by the Syrian conflict next door, more than two decades after Lebanon's own civil war.Salam's government, which groups together rival parties, has been mostly hamstrung since it came to office last year, paralyzed by power struggles and disputes among politicians.Salah Noureddine, a Lebanese national who traveled from Britain to take part in the protest, said it was time to remove "the corrupted system we inherited after the civil war"."I ask all expatriates and all Lebanese from all religions to join in the protest," he said. "If you don't come, we won't succeed. If we stay at home, they will rule for another 25 years or more."