Sisi expected to crack down on loud dissent over move, says expert. 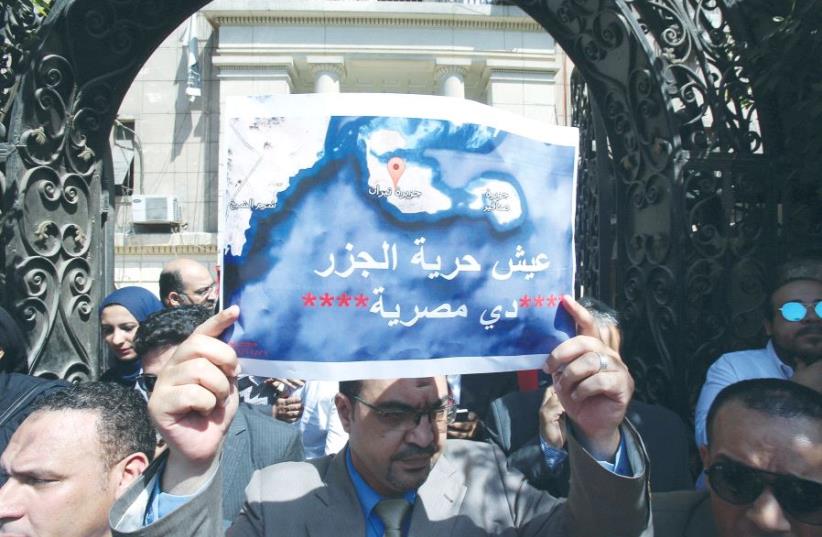 A SIGN READS ‘Two Red Sea islands are Egyptian,’ protesting Egypt ceding sovereignty over such lands to Saudi Arabia, at a demonstration in Cairo on Tuesday.
(photo credit: MUHAMMAD ABD EL GHANY/REUTERS)
Advertisement
Egypt’s parliament on Wednesday voted to approve an agreement transferring the Red Sea islands of Tiran and Sanafir to Saudi Arabia, the most unpopular step by President Abdel Fattah al-Sisi since he took power in 2014.The move came after two parliamentary committees endorsed the agreement. Political activists voiced outrage over what is seen as a sellout of national territory to Saudi Arabia.Plans for the transfer were first announced during an April 2016 visit to Egypt by Saudi King Salman.During the visit, Egypt and Saudi Arabia signed a series of agreements on a range of topics involving some $25 billion.The Saudis clearly wanted some return on their cash and Sisi may have reckoned that relinquishing the islands was less costly than committing Egyptian troops to the Saudi war in Yemen.The Sisi government has said it is merely returning the islands to Saudi Arabia, which it says loaned them to Egypt in 1950 for purposes of the struggle against Israel. But in January a court ruled that the government had failed to provide evidence the islands were ever Saudi property.“If we don’t stand up to defend our land we will have no place in this world,” said Muhammad Abu al-Ghar, a political activist, according to a report in the London-based Rai al-Youm website.“This step will be followed by other compromises. Egypt will become a marginal state in everything and will be a slave state,” he said.He recalled that Egypt lost the islands to Israel during the Six Day War. “This defeat of June 2017 is similar to the defeat of June 1967. After 50 years it is the continuation of the first catastrophe.”“The Egyptian people in its entirety believe the islands are Egyptian but the regime has been pressured by the Saudis,” he said.The Straits of Tiran is Israel’s only access from the Gulf of Eilat to the Red Sea. It was Egypt’s blockade of the straits that served as justification for Israel in the Six Day War. In the peace agreement between Israel and Egypt, the latter provides assurances of freedom of navigation in the straits. Saudi Arabia announced that it would honor all of Egypt’s commitments when it gains control of the islands.In a country where criticism of the regime is not only frowned upon but punished, the islands agreement has become a rare issue where the judgment of Sisi and his allies is being openly challenged. “The main reason is that it looks like they are giving away part of Egyptian territory.The deal was sprung as a surprise on the Egyptian public. It seemed a quid pro quo for Saudi money and the court ruled the transfer of sovereignty was not legitimate,” said David Butter, an Egypt specialist at London’s Chatham House think tank.”The giving away of territory, the lack of an argument to the public, the executive acting despite the judiciary were seen as symptomatic by important sectors of the population that their rulers are acting in an arbitrary way and giving up sovereignty.”“The problem is the way the whole thing has been handled,” he added. “Selling yourself to Saudi Arabia is not a very honorable thing.”If Egypt had an open system, the islands deal could hurt Sisi in a future election, Butter said.But in fact, any polling will be tightly controlled. “More likely you’ll hear a lot of noise, there will be people demonstrating in various forms. But the way things are in Egypt, it’s very difficult to create large momentum for such demonstrations. People will be cracked over the head and taken away to prison and it will add to the general sense of Egypt as rather a repressive place.”In parliament, the legislative and constitutional affairs committee and the national security and defense committee approved the deal Tuesday and Wednesday. Al-Ahram online quoted Kamal Amer, head of the national security and defense committee, as saying it had completed a review of the deal’s technical and historical aspects and that “all the UN historical documents and maps all agree the two islands belong to Saudi Arabia. There was consensus among members of the committee that the two islands belong to Saudi Arabia.”But Muhammad Akl, a member of the committee, told Al-Ahram online that he rejected the deal because it was pushed through without adequate discussion. “I wonder why we were in such a rush,” he said.“Egypt should be in control of at least Tiran because it leads to the Gulf of Aqaba and this area is very important to Egypt’s national security,” Akl said.