EU to begin accession talks with Turkey, offers cash to ease flow of migrants to Europe

Brussels offering 3b. euro, visas, accession talks in exchange for help from Ankara, human rights pushed into the background. 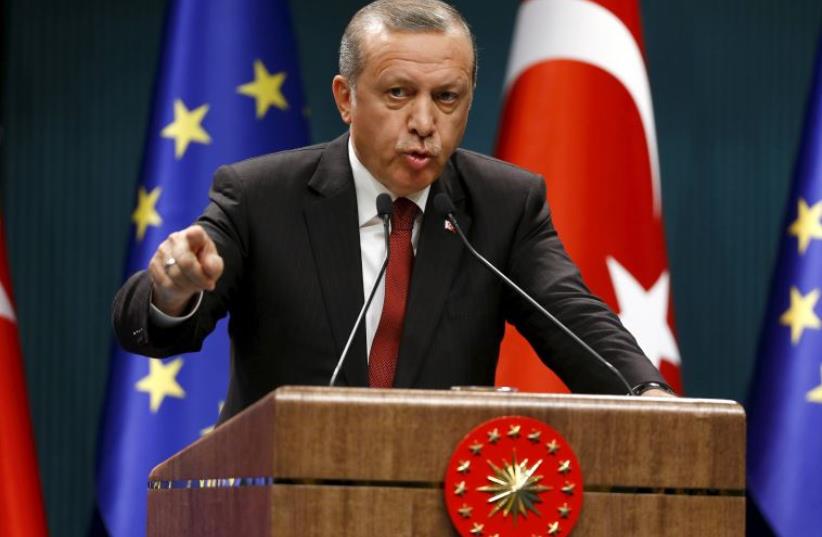 Turkish President Recep Tayyip Erdogan speaks during a news conference in Ankara
(photo credit: REUTERS)
Advertisement
Leaders of the EU aim to sign an agreement with Turkey in Brussels on Sunday that offers Ankara cash and closer ties with the EU in return for Turkish help in stemming the flow of migrants to Europe, draft conclusions of the summit showed.Aware of a sense of desperation in Europe for a solution to a crisis that is tearing the bloc apart following the arrival of close to a million people this year, Turkish President Recep Tayyip Erdogan has been driving a hard bargain. Diplomats said the 28 states had struggled through Saturday to agree on a final offer.The draft deal made clear the trade-off between Turkey’s help in handling the flow of migrants that has called into question the future of Europe’s passport-free travel, and the EU offer of cash and restarting stalled talks on EU accession.“Both sides will, as agreed and with immediate effect, step up their active cooperation on migrants who are not in need of international protection, preventing travel to Turkey and the EU, ensuring the application of the established bilateral readmission provisions and swiftly returning migrants who are not in need of international protection to their countries of origin,” the draft, seen by Reuters, said.Turkish Prime Minister Ahmet Davutoglu is due to meet the 28 EU national leaders for three hours on Sunday evening.The Europeans, none more so than German Chancellor Angela Merkel, are under pressure to manage the biggest influx of people since World War II, the bulk of them to Germany.The crisis has helped populist opponents and set nations against each other, straining the open borders cherished by the union’s members.Measures the EU has taken in recent months have done little to control movements and while winter weather may lower the numbers for a few months, it is also worsening the plight of tens of thousands stuck by closing borders in the Balkans.Sunday’s summit – called just days ago as Brussels tried to clinch a deal offered over a month ago – has been complicated by Turkey’s downing of a Russian warplane on the Syrian border.That has in turn complicated European efforts to re-engage with Moscow, despite a continued frost over Ukraine, in order to try to advance a peace in Syria that could end the flight of refugees and contain Islamic State. The Islamist group’s attack on Paris two weeks ago has heightened public calls in the EU for more controls on migrants arriving from Syria.The EU is offering 3 billion euros ($3.2 billion) to improve life for the 2.2 million Syrians now living in Turkey, so that they are less likely to take boats to nearby Greek islands.The EU wants Turkish authorities to make that journey more difficult and to keep out more of the Afghans and other Asians who cross Turkey on their way to Europe. Ankara is also to take back people who reach Greece but fail to get political asylum.“Both sides agree that the EU-Turkey readmission agreement will become fully applicable from June 2016,” the draft conclusions of the meeting said.Turkey has pressed for more money. The draft left the door open to adjust the amount later.“The need for and nature of this funding will be reviewed in the light of the developing situation. As Turkey hosts more than 2.2 million Syrians and as it has spent $8 billion, the EU thus underlined the importance of burden-sharing within the framework of Turkey-EU cooperation,” the draft said.In the draft, Turks are promised visa-free travel in Europe if they fulfill commitments on migrant flows.The draft talks of “completing the visa liberalization process i.e. the lifting of visa requirements for Turkish citizens in the Schengen zone by October 2016 once the requirements of the Roadmap are met.”EU leaders also pledge to “re-energize” talks on Turkey joining the EU. Diplomats said Turkey, whose decade-old EU accession talks have been stalled, would see talks on economic cooperation open on December 14.But Ankara’s demands for commitments from the EU to start talks on other issues such as human rights would remain on hold – satisfying Cypriot insistence it meet existing conditions – although preparations for them will begin.Human rights concerns are unlikely to feature much in the talks on Sunday, diplomats said, despite calls from activists in Europe and Turkey for EU leaders not to ease pressure on Erdogan over issues such as media freedom.While EU leaders have pledged to continue to raise issues such as last week’s jailing of Turkish journalists and new complaints of oppression from minority Kurds, officials and diplomats say Europe’s priority with Ankara for now will be getting Erdogan’s help in slowing migrant movements.