Maj.- Gen Yoav Mordechai tells Al Jazeera that Israel has clear information pointing to the fact that Hamas is supporting the Sinai Province. 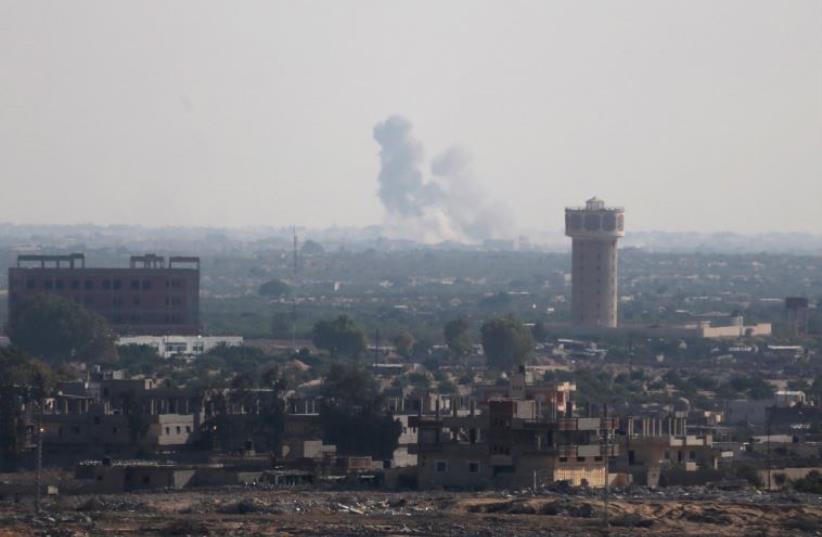 Smoke rises in Egypt's North Sinai as seen from the border of southern Gaza Strip with Egypt July 1, 2015.
(photo credit: REUTERS)
Advertisement
Members of the armed wing of Hamas are actively aiding the Sinai Province, the Islamic State-affiliated group that carried out Wednesday’s massive attack on multiple Egyptian Army positions in north Sinai, a senior Israeli military official said on Thursday.Maj.-Gen. Yoav Mordechai, the coordinator of government activities in the territories, told Al Jazeera that Israel has clear information pointing to the fact that Hamas is supporting Sinai Province.In recent terrorist attacks in the peninsula, Hamas has provided aid in the form of weapons and logistics to the Islamic State branch in Sinai, Mordechai said.
Alleged video of today"s Sinai attacks surfaces on social media‏
“We have examples of Hamas commanders actively taking part in this assistance,” he told Al Jazeera. “Wael Faraj, a battalion commander in Hamas’s armed wing [Izzadin Kassam], smuggled wounded [fighters] from Sinai to the Gaza Strip.”Mordechai gave a further example of the Hamas coordination with Sinai Province, saying that “Abdullah Kitshi is a senior training officer in Hamas’s armed wing and he has trained members of the Sinai Province group. Hamas’s armed wing has ties to ISIS.Ties in the fields of logistics and weapons. I am convinced of this and I have proof.”Egypt carried out air strikes on Islamist targets in Sinai on Thursday, killing 23 fighters a day after the deadliest clashes in the region in years, security sources said.Those killed had taken part in Wednesday’s fighting in which 100 terrorists and 17 soldiers, including four officers, were killed, according to the army spokesman.The IDF increased its readiness on the southern border on Thursday and is prepared for any attack on its territory as drones observed action on the other side of the line, Israel Radio reported.The Cairo-based Al-Shourouk newspaper quoted an unidentified source claiming that fighters infiltrated from Gaza through tunnels to Sinai to participate in the terrorist attacks on Wednesday. The attackers included Palestinians, Afghans, and other foreigners, the source added.The Egyptian Army is chasing after terrorists and trying to prevent them from fleeing through tunnels to Gaza.“The assault on [the town of] Sheikh Zuwaid is different from previous hit-andrun attacks carried out by the Islamic State in Sinai against the army and points to a shift in the group’s strategy,” said Firas Abi Ali, head of Middle East Analysis at IHS Country Risk.“The high degree of planning, the number of militants involved, and the tactics used indicate that this was likely to be a probing operation intended to test the army’s capabilities and prepare the ground for capturing territory in North Sinai,” he said.“The United States strongly condemns the terrorist attacks against Egyptian security forces in North Sinai this morning,” US National Security Council spokesman Ned Price said on Wednesday.“The United States stands resolutely with Egypt amidst the spate of terrorist attacks that have afflicted the country and, in the context of our long-standing partnership, will continue to assist Egypt in addressing these threats to its security,” Price continued.Oren Kessler, deputy director for research at the Foundation for Defense of Democracies in Washington and a former reporter for The Jerusalem Post, said, “The US National Security Council spokesman evoked unusually strong language in responding to Monday’s assassination of Egypt’s top prosecutor, vowing that Washington would stand together with Egypt to fight the ‘scourge’ of terrorism.“However, that rhetoric will come as cold comfort to the Egyptian government and those of its citizens who back Sisi,” said Kessler, adding that “they haven’t forgotten that the US withheld part of its security aid, and key big-ticket military items, at a time when Cairo felt the greatest need for it in order to counter terrorism.”A recent State Department report slamming Egypt over alleged human-rights abuses didn’t help, he noted.“Given its frustration with Washington, it is no wonder that Egypt has recently sought military hardware elsewhere – chiefly France and Russia – rather than with its longtime ally the United States.”The Sinai-based affiliates of Islamic State have stepped up attacks on soldiers and police since then-army chief Abdel Fattah al-Sisi toppled Islamist president Mohamed Morsi in 2013.On Monday, a car bomb killed the prosecutor-general in Cairo, the highest-profile official to die since the insurgency began.On Wednesday, Egyptian security forces stormed an apartment in a western Cairo suburb and killed nine men whom they said were armed, security sources said.The men included Muslim Brotherhood leaders; the organization called on the public to “rise in revolt to defend your homeland” in response to the killings in “cold blood.”In a statement on issued on the Brotherhood website on Wednesday, the organization warned of an escalation in its struggle against the government: “The Muslim Brotherhood stresses that the assassination of its leaders is a significant development with serious repercussions, with which the criminal [President] Abdel Fattah al-Sisi is laying the foundations for a new phase where it will not be possible to control the anger of the oppressed who will not accept to be so executed in their homes among their families.“Oust the heinous murderer,” and, “Reclaim Egypt once again,” the Brotherhood statement concluded.Reuters contributed to this report.