Hot off the Arab press 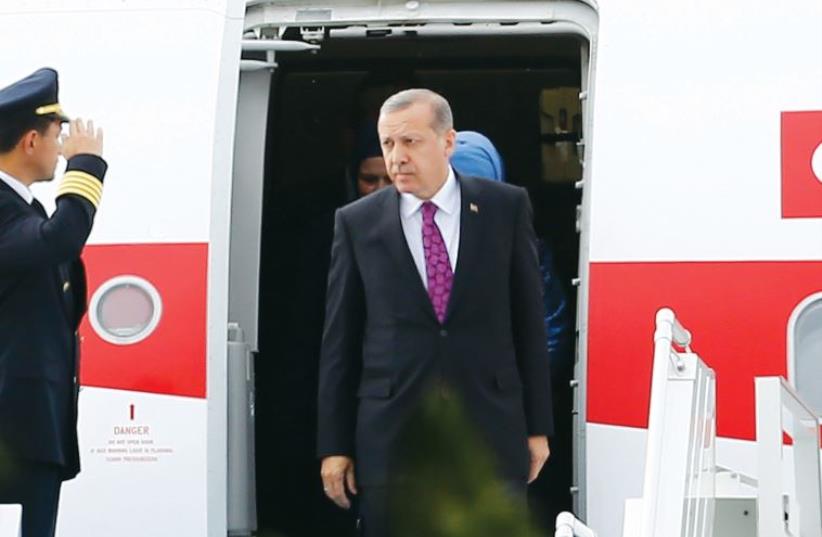 Turkish president Recep Tayyip Erdogan looks on after arriving in Ankara, on Tuesday.
(photo credit: UMIT BEKTAS / REUTERS)
Advertisement
Turkey’s Erdogan will bury At atürk tomorrow
Al-Nahar, Lebanon, June 6It is not a mere coincidence that the anniversary of the fall of Constantinople, the capital of the Byzantine Empire, coincides this year with dramatic parliamentary elections in Turkey. The elections this week are nothing short of a dramatic milestone in the history not only of Turkey, but the region at large. They will determine whether Turkey remains a democracy or not. The problem is that [Turkey’s President Recep Tayyip] Erdogan does not see himself less important than Sultan Mehemet II, who demolished the walls of Constantinople in 1453. Nor does he think that he is much different than Sultan Selim I, who defeated the Mamluks in the Battle of Marj Dabiq in 1516, enabling the Ottoman takeover of the Arab Peninsula. This aura of greatness is what Erdogan seeks to surround himself with, and it is not unlikely that if his party fails to win the required parliamentary seats, he will take over the country’s rule by force. On the regional level, Erdogan is the guardian of the Muslim Brotherhood, whose power he would like to see restored in both Egypt and Syria. He has turned a blind eye to the numerous Islamic State and Al-Nusra activists who have come in and out of his country’s borders. In March of 1924, Mustafa Kemal Atatürk announced his decision to abolish the caliphate and form a parliamentary democracy in Turkey. All the signs suggest that Erdogan will cancel this decision tomorrow. – Sameeh Saeb
Betrayal and No Accountability
Al-Anba, Kuwait, June 6Forty-eight years ago, this month, the Israeli Air Force launched a sudden strike against the Egyptian, Syrian, and Jordanian Air Forces and destroyed their entire airfields within minutes. Using precise intelligence, the Israeli forces gained quick control over vast territories – the Golan Heights, the Gaza Strip, the West Bank, and Sinai. While the Egyptian Air Force was defeated within virtually two hours of the war, Egyptian military commanders deceived their Arab allies and brought them to believe that they are actually winning. The Egyptian Chief of Staff at the time, Abdel Hakim Amer, was a highly corrupt and inexperienced commander, who was appointed as Field Marshal due to his proximity to President Gamal Abd Al-Nasser. Our defeat in June 1967 was caused by betrayal and lies at the highest levels of our commands: among generals, among politicians, and among the leaders of our nations. There was no coordination and no accountability. Ironically, this is exactly what we see today in the war against the Islamic State. There are some 60 countries that joined the international coalition against ISIS. Islamic State soldiers are amateur volunteers with very little fighting experience. And yet, we have failed to defeat them so far. Why? Because each nation wants to see the other fighting. Because we provide each other with wrong information about our progress. Because domestic politics outweigh international ones. In short, because of the exact same reason that brought to our dismal defeat in June 1967: betrayals and no accountability. – Sami al-Nasef
The Rise of Holy War
Al-Sharq al-Awsat, London, June 5We are in the midst of a very big and messy war in the Middle East – worse, even, than what the region experienced during the First and Second World Wars.We witness the use of all types of weapons, from primitive knifes to state of the art technology such as remote-controlled drones. But the most dangerous weapon of all is religion. It is a paramount power because it is capable of mobilizing entire communities and sending armies of young people to die. Its effect is like that of a nuclear bomb: it remains toxic and deadly for decades, long after the war had ended. As for the citizens who are recruited to these wars, they do not understand that they are simply soldiers in someone else’s game of chess. Our region is experiencing growing strife that is based on our differences: Sunnis fighting Shiites; Hezbollah fighting Al-Qa’ida; and entire villages fighting each other. We now see an Iranian attempt to “export” the sectarian strife into the Arab Gulf – with the current unrest in Yemen and the Gulf campaign against the Houthi rebels. The biggest threat to our existence is that we fail to acknowledge these wars. We pretend they are not happening. In order to ensure the viability of the Arab world we must stand firm and say: holy war is a tool used by sinister forces to destroy our countries. We will not tolerate this anymore.

– Abd al-Rahman al-Rashid
Geneva and the Yemeni ceasefire
Al-Arabia, Saudi Arabia, June 6The Geneva peace talks have again been postponed, due to a failure to gather all Yemeni fractions together. The humanitarian conditions in Yemen continue to be grim, with 80% of the population – about 20 million civilians – in need of help. Stephen O’Brien, the United Nation’s envoy to Yemen, described the current situation in the country “catastrophic.” Whether the Geneva talks take place or not and whether the Houthis attend or not, one thing is clear: Yemen is currently governed by UN Security Council Resolution 2216.The resolution, which was passed in April, imposed sanctions and travel bans on Houthi rebel leaders, and called Arab states to oversee cargo and weapons entering Yemen. The legitimate Yemeni government, therefore, refuses to attend the talks. In its perspective, talks cannot begin until Houthi rebels withdraw from the main cities, in accordance with the UN resolution. In the eyes of the Houthis, meanwhile, the Geneva talks provide an opportunity for international recognition and political legitimacy. Mohammad Ali al-Houthi, the Houthi militia commander, declared that he is willing to come to Geneva himself, in order to participate in the talks. As far as the Houthis are concerned, they have nothing to lose. – Mashari al-ZaidCompiled by The Media Line