Iran also said its security forces killed the mastermind of the attacks on Saturday. 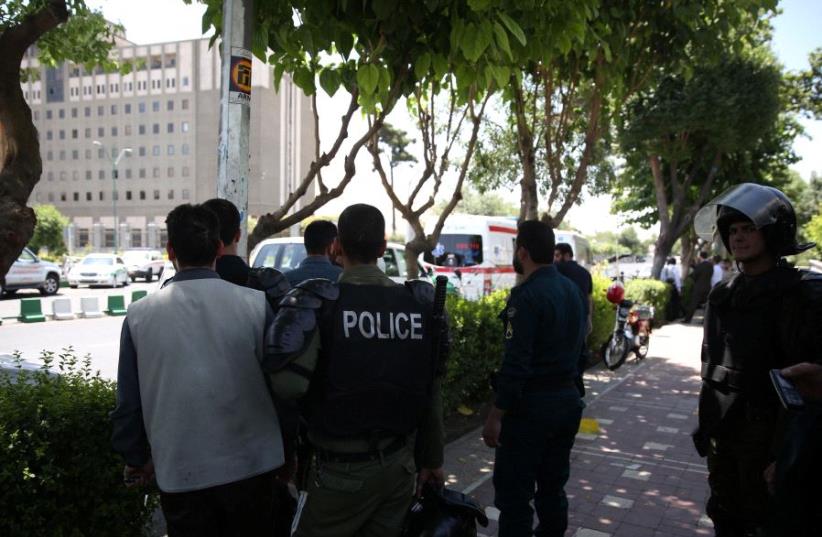 Iranian police stand near the parliament's building during a gunmen attack in central Tehran, Iran, June 7, 2017
(photo credit: REUTERS)
Advertisement
LONDON - Iran has arrested almost 50 people in connection with twin attacks on Tehran that killed 17 people last week, officials said, as security forces stepped up efforts to crack down on suspected militants.Islamic State claimed responsibility for the suicide bombings and gun attacks on parliament and the mausoleum of the Islamic Republic's founder, Ayatollah Ruhollah Khomeini, on Wednesday.Iran's intelligence minister Mahmoud Alavi said on Saturday night that 43 suspects had been arrested and operations to identify and crush more "terrorists cells" were under way.On Sunday, the head of the justice department in Kordestan province in western Iran announced more arrests."Six people who were certainly connected to Wednesday's terrorist attacks in Tehran were identified and arrested," Aliakbar Garousi was quoted as saying by the Fars news agency.Iran also said its security forces killed the mastermind of the attacks on Saturday."The commander of this terrorist group was based in the border regions, but after the attacks left the country," Alavi was quoted as saying by state broadcaster IRIB on Sunday."However, with cooperation of (intelligence) services that are close to Iran, he paid the price of his crimes on Saturday and was killed by Iran's security forces and our friends in the other intelligence services," he said.Iran's intelligence ministry said on Thursday that five of the gunmen and bombers were Iranian members of Islamic State who had fought in the militants' strongholds in Syria and Iraq.

QUESTIONS IN PARLIAMENTThe attacks were the first claimed by Islamic State inside tightly controlled Shi'ite Iran, one of the powers leading the fight against the Sunni militants in the region.The Iranian lawmakers invited the intelligence minister, interior minister and also the deputy head of the Revolutionary Guards to the parliament to report on Sunday about the biggest security breach in the country in more than two decades."The ministers should explain how terrorists managed to reach the capital and hit two sensitive targets. We are not satisfied with the answers given so far," Asadullah Abbasi, a lawmaker was quoted as saying by judiciary's news agency, Mizan.Abbasi said the attacks were unprecedented since the killing of Iranian lawmakers in 1980s.In 1981, a bomb planted by an Iranian opposition group in Tehran killed 27 Iranian members of parliament and dozens of other officials.In Wednesday's attacks no member of the parliament was killed as the attackers were unable to reach the main building.Iranian lawmakers said the intelligence minister had assured them that "all Islamic state elements have been eliminated" in the country.