Iran continues to call for Israel’s destruction despite nuclear deal

Dore Gold, former Foreign Ministry director-general, says not ‘one iota’ of moderation has been seen from Tehran. 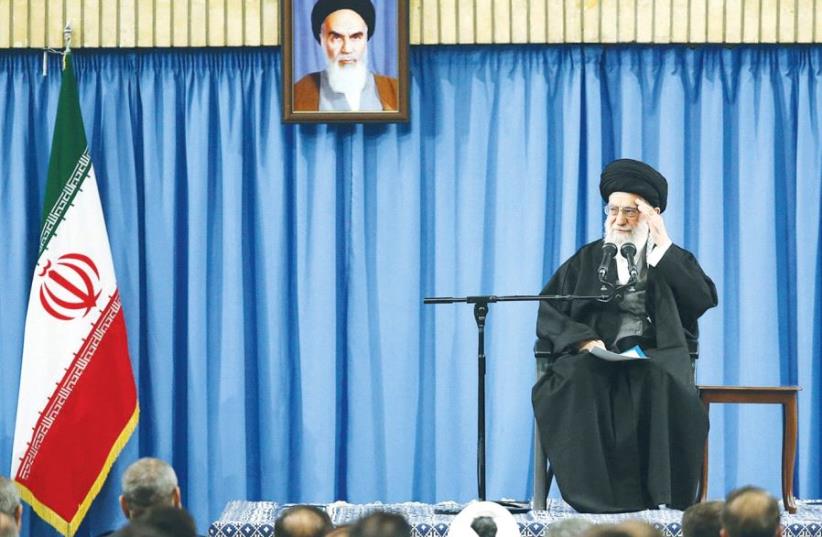 Iran's Supreme Leader Ayatollah Ali Khamenei waves as he delivers a speech in a meeting with military commanders in Tehran earlier this month
(photo credit: REUTERS)
Advertisement
Iranian leaders’ calls for Israel’s destruction have not abated at all in the 20 months since the Iranian nuclear deal was signed, meaning that those who claimed the deal would moderate Iranian attitudes were completely wrong, former Foreign Ministry director-general Dore Gold said on Wednesday.Gold’s comments came as the think tank he heads, the Jerusalem Center for Public Affairs, put out a compilation of poisonous statements made by Iranian leaders, including Supreme Leader Ayatollah Khamenei, since the Joint Comprehensive Plan of Action was signed in July 2015.“There is absolutely no indication of one iota of moderation by the Iranian elite in their hostile intentions toward Israel since the conclusion of the Iran nuclear agreement. Iranian policy in this regard is driven by the Supreme Leader Ayatollah Ali Khamenei and the Islamic Revolutionary Guard Corps,” Gold said.“In September 2015, Khamenei himself said that the nuclear agreement would not change the destruction of Israel in 25 years,” he added. “Those who asserted that the Iran nuclear agreement would lead to a moderation of Iranian attitudes were completely wrong.”Leading what could be termed a “greatest hits parade” of Iranian anti-Israel comments since the regime was Khamenei himself, who in September of 2015, just three months after the deal was signed, said: “You [Zionist regime] will not see 25 years from today! By Allah’s favor and grace, nothing called the ‘Zionist regime’ will exist by 25 years from now.”Khamenei even re-tweeted himself, saying that the “people” picked this quote as his most significant remark in the Iranian year 1394: “Zionist regime will not see 25 years later.”
Trump says will do more to stop Iran"s nuclear ambitions (credit: REUTERS)
It is likely that this comment, and others calling for Israel’s destruction, were referenced during Wednesday’s meeting between Prime Minister Benjamin Netanyahu and US President Donald Trump when they spoke about Iran and its destabilizing influence in the region. Iran’s destabilizing activities in the region was on the top of the list of topics that Netanyahu wanted to discuss with Trump.Nuggets from Khamenei’s senior military adviser, Brig.-Gen. Rahim Safavi, were also highlighted, including his comment in July that “the only way for the liberation of occupied Palestine and the elimination of this criminal, villain, inhuman and anti-Muslim regime is the unity of Muslims, the strategy of the Islamic resistance and the continuation of armed jihad against this dirty and filthy regime.”In May, Ahmad Karimpour, senior adviser to the commander of the Quds Force, Qasem Soleimani, said: “With the facilities and equipment we have, we can raze the Zionist regime to the ground in less than eight minutes, if we ever decide to act, based on the supreme leader’s orders.”Brig.-Gen. Hossein Salami, the deputy commander in chief of the Revolutionary Guards, said on July 1 that Israel will soon collapse, adding: “Taking into account that Hezbollah has stored more than 100,000 missiles, the Islamic Republic possesses 10 times more missiles of different types, and its power is unlimited.”Revolutionary Guards Aerospace Force commander Gen. Amir Ali Hajizadeh said in October, “Today, Israel is surrounded by Islamic countries, and it has a short life to live; it will be destroyed by war even before the firing of these missiles.... Israel’s evil is totally clear to us, and our missiles’ 2,000-km. range is for fighting against the Zionist regime at a distance.... We do not aim to conquer other countries but, rather, to support oppressed nations [referring to Palestinians, Houthis in Yemen and other Arab minorities] against tyrants, and anyone who intends to harm oppressed Muslims should know that these missiles are a threat.”And as recently as last Friday, Ramadan Sharif, head of the Revolutionary Guards public relations and general publicity department, said on Revolutionary Victory Day: “Martyrs protecting the holy places bring pride to the Islamic nation and stand firm against those who blackened the image of the prophet.... It is a fact that Israel is responsible for any attacks against Muslims; step-by-step, we are nearing the destruction of Israel and the salvation of al-Quds [Jerusalem].”