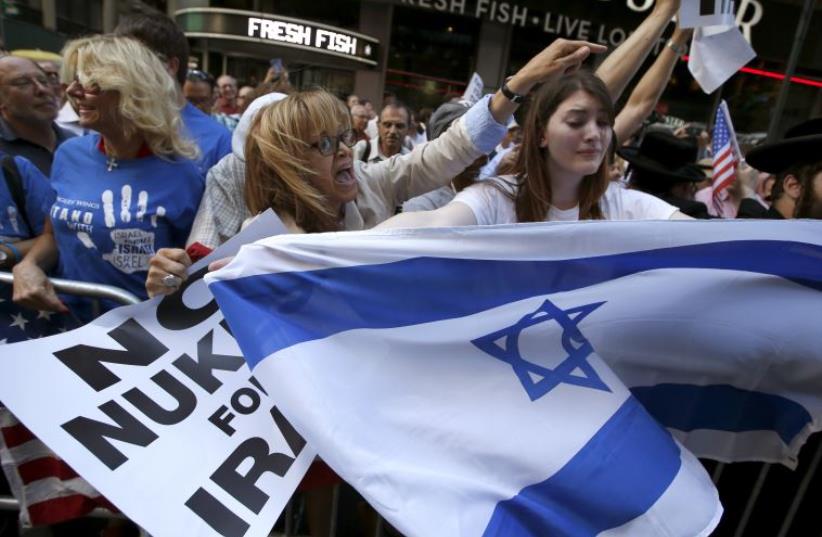 Protestors shout slogans as they demonstrate with thousands of others during a rally apposing the nuclear deal with Iran in New York
(photo credit: REUTERS)
Advertisement
US President Barack Obama’s statement on Wednesday that all countries that have commented on the Iran deal support it – except for Israel – is misleading. Arab leaders are only being polite in their reticence.Leaders of the Gulf Arab states have opted for a less confrontational approach with Washington than the strong public opposition exhibited by Prime Minister Benjamin Netanyahu and his government.Instead of voicing their displeasure publicly and directly to the US over its rapprochement with Iran, they have instead chosen to get their message across unofficially through articles in Arab owned-media and by leaking their strong discontent to the Western press.
Obama: Netanyahu is wrong, the facts support Iran deal
Abdulrahman al-Rashed, general manager of Al-Arabiya TV and former editor-in-chief of the popular Arab daily Asharq Alawsat, wrote a recent article in the Saudi-backed publication stating that the Iran deal “was viewed by some as a rather low move by Washington against its longtime allies in the Gulf, who were loyal for over five decades.”“As a result, some in the region believe the deal requires that the Gulf states reconsider their relationship with the US,” he said, adding, “This represents the lowest point in the history of the Gulf-US relationship.”Officially, however, the message was the exact opposite. Gulf Arab states told US Secretary of State John Kerry in talks this week that they supported the deal.Qatari Foreign Minister Khalid al-Attiyah, speaking at a news conference after talks between the foreign ministers of the six countries of the Gulf Cooperation Council and Kerry, said that “we are confident that what they undertook makes this region safer and more stable.”Simon Henderson, the Baker fellow and director of the Gulf and Energy Policy Program at the Washington Institute for Near East Policy, told The Jerusalem Post that the text of the US-GCC joint statement “made it clear that the GCC was very concerned about Iran’s capacity for mischief, citing in particular events in Bahrain in the previous few days.”“The US media spun the meeting as showing Gulf support for the accord. The Gulf media emphasized warnings to Iran not to meddle,” said Henderson.“The Gulf rulers have clearly decided to avoid a public split with the US on the nuclear accord,” he said. “They also don’t want to be publicly on the same page as Israel.”David Pryce-Jones, author of The Closed Circle, wrote over 25 years ago that the shame-honor dynamic in Arab culture means the greater the stakes, the more caution expressed as a safety screen.He cited the experience of Kenneth Pendar, a former intelligence agent, who said that, “Arab psychology is a fascinating study.... Much of what goes on in places like Syria or North Africa must seem utterly confusing to anyone who has not lived with Arabs and been in close contact with their subtle and indirect ways of thought.”“At first I was completely baffled by some of the conversations I had with them. As I carefully recorded my notes afterwards, I would find that my written record of the conversation was quite different from the impression I had of it. Sometimes it seemed exactly the opposite,” Pendar said.Reuters contributed to this report.