US president says such outrageous rhetoric has become commonplace among Republican politicians. 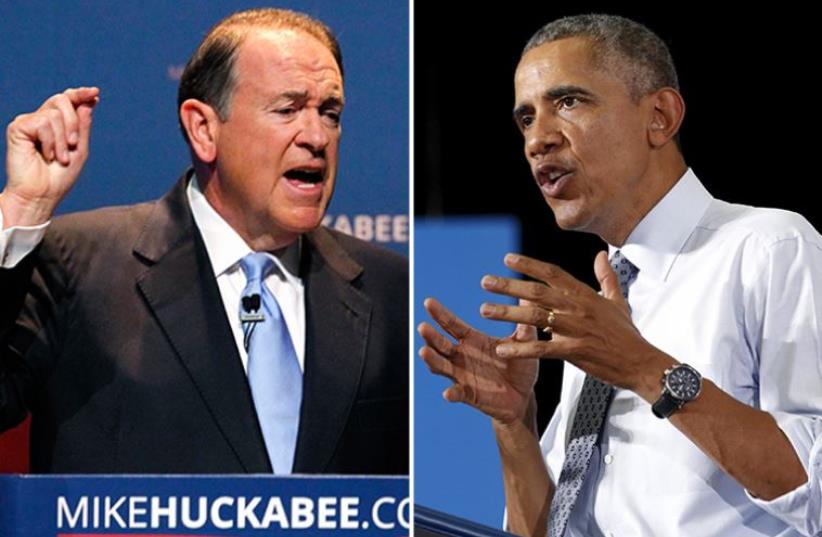 Obama and Huckabee
(photo credit: REUTERS)
Advertisement
WASHINGTON -- Former Arkansas governor Mike Huckabee is defending his comparison of the Iran nuclear deal to circumstances that preceded the Holocaust.Facing accusations of extremism and partisanship from US President Barack Obama, the Democratic Party and the Anti-Defamation League, among other groups, Huckabee said on Monday that he will "stand with our ally Israel to prevent the terrorists in Tehran from achieving their own stated goal of another Holocaust."
Obama slams Huckabee for invoking Holocaust in his criticism of Iran deal
His initial comments on Sunday morning, which invited criticism as well as mass media attention, asserted the nuclear deal reached with Iran was an "idiotic" move by Obama that was based on trusting the Iranian regime. "By doing so," he charged, "he will take the Israelis and march them to the door of the oven."Speaking to press while on a visit to Ethiopia, Obama responded directly to the former governor's comments by casting them as an increasingly typical brand of Republican rhetoric."The particular comments of Mr. Huckabee are, I think, part of just a general pattern that we've seen that... would be considered ridiculous if it weren’t so sad," Obama said. "We've had a sitting senator call John Kerry Pontius Pilate. We've had a sitting senator who also happens to be running for President suggest that I'm the leading state sponsor of terrorism. These are leaders in the Republican Party."Since announcing the deal in Vienna on July 14, the White House has cast its critics as posturing politicians— and has expressed confidence in its ability to hold on to votes in the US Congress, where a vote of disapproval in September could scuttle the agreement should two-thirds of lawmakers vote for it.In his press conference in Addis Ababa, Obama said that he has been trying "to get a good argument on the other side that's based in fact as opposed to rhetoric." "I haven’t gotten one yet," he asserted. "So if you're asking me, how do you think our argument is going, it's going great. Now, if you're asking me about the politics of Washington and the rhetoric that takes place there, that doesn’t always go great."While ADL quickly released a statement condemning Huckabee's remarks as "out of line," its head of international affairs, Michael Salberg, took to CNN to explain the group's concerns with the effects of his comments.It "distracts from the kind of conversation the American public deserves," Salberg said, adding that the "details" of the agreement must be understood by the public during this "crucial" 60-day congressional review period. On Twitter, Huckabee doubled down on his comments on Monday morning.

"What's 'ridiculous and sad' is that @POTUS does not take Iran's repeated threats seriously," he tweeted, linking to the president's Twitter handle. "'Never again' will be the policy of my administration."He ALSO tweeted a series of messages Sunday with quotes from Iranian Supreme Leader Ayatollah Ali Khamenei and Hezbollah leader Hassan Nasrallah in which they threaten Israel with a holocaust.

"It is the mission of the Islamic Republic of Iran to erase Israel from the map of the region." - Ayatollah Khamenei http://t.co/tMBfHPHZk2
— Gov. Mike Huckabee (@GovMikeHuckabee) July 27, 2015

"If they [Jews] all gather in Israel, it will save us the trouble of going after them worldwide." - Hassan Nasrallah, Hezbollah leader
— Gov. Mike Huckabee (@GovMikeHuckabee) July 27, 2015


Huckabee is running for the Republican nomination for president, and his rivals weighed in on his controversial remarks on Monday. Former Florida governor Jeb Bush said the comments were "just wrong," despite his staunch disapproval of the agreement; while former senator Rick Santorum said the remarks were "absolutely right."In Jerusalem Prime Minister Benjamin Netanyahu continued his assault against the Iran deal during a speech he gave in the Knesset.Syrian President Bashar Assad and Hezbollah leader Hassan Nasrallah are already celebrating the billions of dollars Iran will receive as a result of this agreement, which will be used to help them in their terrorist activities, Netanyahu said.Iran, he added, continues to threaten the United States in spite of the agreement and has already declared that its nuclear sites will not be inspected even though it is one of its obligations under the deal, Netanyahu said.“This agreement gives international legitimacy to Iranian nuclear armament in the future and its continued aggressive activity in the present,” said Netanyahu as he explained that Iran was the large terrorist state in the wold.Tovah Lazaroff  and Jpost.com Staff contributed to this report.
Advertisement
Subscribe for our daily newsletter