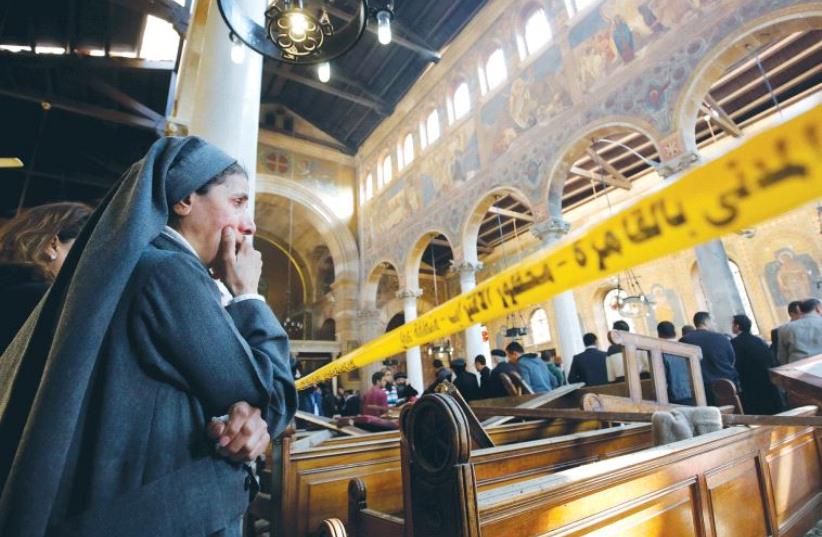 A NUN WEEPS inside Cairo’s St. Marks Coptic Cathedral yesterday, after terrorists killed at least 25 people and wounded 49 during Sunday mass
(photo credit: AMR ABDALLAH DALSH / REUTERS)
Advertisement
At the Mary Jirjis Church in Ismailia, Egypt, Mervat Jirjis described how her family recently fled their home in the northern Sinai town of El Arish after her husband received a threat to leave immediately or be slaughtered.“The terrorists told him: ‘Your blood is permissible for us if you don’t leave.’ This caused me to leave immediately carrying only a bottle of water because they attack anyone carrying travel bags or furniture. We have heard a lot about cases of murder and I decided not to wait and see any of my relatives be under such circumstances,” she said in remarks published Tuesday in the Al-Masry Al-Youm newspaper.Jirjis is one of hundreds of Coptic Christians forced to flee their homes in El Arish due to Islamic State attacks.
Egypt"s Christians, forced to flee homes in north Sinai due to ISIS, receive aid at a church
They have become the region’s newest group of displaced persons.A woman who gave only her first name, Lamia, told the paper that ISIS “drew swords on the walls and doors of our homes as a threat and we left everything behind us.”She said her Muslim neighbors had offered to protect her family but she declined because she did not want to endanger them.An estimated 80 families have taken shelter in Ismailia, 115 kilometers northeast of Cairo, where the Mary Jirjis Church provides them with food and psychological support for their children.ISIS, which is waging an insurgency against the Egyptian government in Sinai, has turned to targeting Christian civilians after suffering setbacks in its confrontation with the army.“It was quite a new out-ofthe- box practice of ISIS. They saw they can’t fight properly the security forces so they decided to make a U-turn and hurt the civilians, the Copts,” said Mira Tzoreff, an Egypt specialist at Tel Aviv University’s Dayan Center. “By doing that they undermine the Sisi regime, because from the first day Sisi has tried to rehabilitate relations between Muslims and Copts.”Sisi’s efforts included visiting Coptic Pope Tawadros II early in his tenure and encouraging passage of a law making it easier for the Coptic community to restore churches.But with the attacks, “suddenly it seems Egypt is not able to protect its Coptic citizens. This is quite a problem for Sisi,” Tzoreff said. Heightened problems for Sisi are cause for concern for Israeli policy-makers too, who view him as a crucial regional partner.ISIS terrorists shot and killed seven Christians in separate attacks in El Arish during February, according to Al Jazeera.In one case, they killed a Christian plumber at home in front of his family. In another, a man was reportedly killed in front of his pregnant wife.On February 19, ISIS released a video threatening attacks on Christians as a follow-up to its December bombing of St. Mark’s Cathedral in Cairo, which killed 28 people. The video described Christians as “infidels” and enemies of Islam.Al-Masry Al-Youm described how Muhammad Abdul- Karim, a psychologist who came to the church to help children, joked with them to put them at ease and promised there would be a magician, balloons, contests and gifts.“The children don’t know why they were forced to leave their homes [but they know] there is something wrong and they don’t feel safe,” he said.“The aim of these sessions is to provide them with serenity and psychological stability.”Father Arsinius Ayad, who is in charge of the church, said: “We received children who were traumatized and we have to absorb them and give them the message they are in their country so they don’t feel alienated. They were exhausted and they feel pressured after what they’ve seen and this has been alleviated after officials and concerned people visited them.”Nadira Samaan, who is volunteering as a cook, added: “I was crying as I offered food to them, especially the kids. They are so hungry that they race to get the food.”Opposition groups in Egypt are criticizing the government’s handling of the crisis and are saying it should be more active in helping those who fled, facilitating the exit of those who are still in El Arish and want to leave, and safeguarding those who must stay in Sinai. Sisi has ordered the Egyptian Ministry of Education to transfer displaced students to schools where they have taken refuge so they can resume their studies.Tzoreff says it is important for the regime to ensure that the displaced get housing in Ismailia, Cairo or Alexandria, and are able to get into some kind of routine there, since it is impossible to predict whether their displacement will last months or even years.“The authorities need to do their utmost efforts to find them alternatives as soon as possible,” she said.“Otherwise the Copts will turn into an opposition group and Sisi doesn’t need that.”