The story of a woman who joined ISIS

Italian documentarian Benedetta Argentieri's film The Matchmaker had its first Israeli premiere at the Haifa International Film Festival. What she found would forever change the way she viewed ISIS.

Benedetta Argentieri, the director of the documentary The Matchmaker, about a young European woman who joined ISIS in Syria and recruited dozens of other women, which just had its Israeli premiere at the 38th Haifa International Film Festival, is slender and softspoken, but she is one of the toughest women you are ever likely to meet.

Underneath her picture on her website are the words, “Milano, New York, Iraq, Syria,” and while the Italian-born journalist and filmmaker spends part of her time in the first two cities mentioned, she is just as likely to be found in the latter two countries, reporting and researching in areas that are among the world’s most deadly war zones.

The Matchmaker is a fascinating film that fits squarely into Argentieri’s main focus: women caught up in wars, particularly in the shadow of Islamic extremism in the Middle East. “I am interested in the stories nobody else is reporting on from a real woman’s perspective,” she said in an interview in Haifa.

Too often, the women caught up in this conflict “are portrayed as veiled victims or sexy girls with guns,” she said. Among her films are Blooming in the Desert, about women rebuilding their lives in Raqqa following the defeat of the Islamic State, and I Am Revolution, about three women fighting for freedom and gender equality in Syria, Iraq and Afghanistan.

‘I am interested in the stories nobody else is reporting on from a real woman’s perspective,’ says director Benedetta Argentieri. (credit: Haifa International Film Festival/Ziv Amar)

In 2019, she began to report on two refugee camps in Syria, housing about 12,000 women and children from 48 countries. They were captured in the wake of the 2019 Battle of Baghuz Fawaqani, when a coalition led by Syrian Kurds defeated one of the last remaining strongholds of ISIS, and they have remained in this camp because their home countries have denied them repatriation.

It was here that she met Tooba Gondal and her children. “Many women would approach me and ask if they could make an appeal to their government to get them out,” said Argentieri. “Tooba said she wanted to record a message to the British government and I said fine.”

After she heard Gondal’s name, she realized that this quiet woman, who spoke perfect English, was the notorious jihadist propagandist credited with encouraging women to leave the West and join ISIS, via frequent, inflammatory posts on social media.

Born in France to a family of Pakistani descent, she was raised in Britain and abandoned university studies in English literature in London to join ISIS, in 2015, in her early 20s. Not long after she left London, using the alias Umm Muthanna al-Britannia, Gondal posed in a photo she posted on Twitter of herself dressed in a burqa while brandishing an AK47, captioned, “Living the life of real freedom.”

She posted tweets applauding the terror killings in Paris in 2015, in addition to many other social-media posts designed to get attention and entice others to join the cause.

When Argentieri realized who Gondal was, she jumped at the chance to interview this infamous woman. However, The Matchmaker is are not just a portrait of Gondal but also an attempt to understand why a middle-class young woman in Britain would abandon her studies and join the Islamic extremist group, as so many thousands did.

“Everyone thought she was dead,” explained Argentieri. “When Raqqa [the capital of the Islamic state set up by ISIS] was taken, she went quiet.”

GONDAL IS an interesting, if often disingenuous subject, who says she felt alienated in England and was radicalized by reading Islamic material online, but it is hard to tell when she is being honest. Married to three different ISIS fighters who were all killed, she claims to have been a submissive victim, although it is hard to reconcile this claim with her self-possessed, assertive demeanor.

Argentieri points out all the details that prove that she was an important figure in the ISIS hierarchy, including that she was allowed to wear certain clothes that were forbidden to ordinary women. “No other woman had the freedom she had,” said Argentieri. “She was allowed to stay on her own after her husbands died, she did not have to live in a women’s house,” where women fought bitterly over scant rations and other privations.

Argentieri repeatedly asks her tough questions – I wish interviewers on news networks were as direct and persistent as she is – and Gondal, with the gleam in her eyes of a natural con woman, becomes increasingly vague. What did she know about the Yazidi women and girls who were sold as slaves all around her?

Not much, although she insists they were treated well and that one child captive loved her captor. Pressing her for details of the sales of these slaves, Gondal seems to want to say more and prove how knowledgeable she is but she clams up. 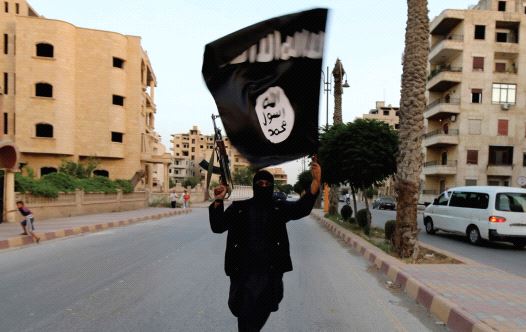 A MEMBER of ISIS waves the group’s flag in Raqqa (credit: REUTERS)

A Kurdish fighter with one of the forces that captured Raqqa and several Yazidi survivors have refuted Gondal’s claims that they were treated well. The horrific abuse of these women and girls has been widely reported.

“I have mixed feelings about her,” said Argentieri of her controversial subject, who was eventually imprisoned in France and currently awaits trial on charges of having been a member of a terror organization. “I know she was trying to manipulate me and use the interview in a way that would help her present herself in a certain way that would be useful.”

There were many ways in which Gondal was not honest with her, she felt. “She pretended not to be fluent in English or Arabic, she would pretend not to know common words.” In a film clip she made before her radicalization, Gondal had a strong British accent, which she toned down later, Argentieri noted. Gondal is quite comfortable in front of the camera: “She has the vanity of a person who has been online so much.”

Argentieri feels that her encounter with Gondal taught her some lessons. “Everything was clear in the Islamic State, while in the West, there was a loss of values for many young people, who couldn’t find meaning in anything.” In the end, she realized that in reporting Gondal’s story, “Nothing is black or white, there is a whole gray area.”

But she was haunted by another woman she met in the camp, who had lived in the US and who was originally from Ethiopia or Eritrea but did not want to be repatriated. “We’re going to put all your heads on spikes one day,” the woman told her.