"The methods used by the Islamic State are much different than those of al-Qaida," 'Mr. Islam' Bernard Godard tells 'Post.' 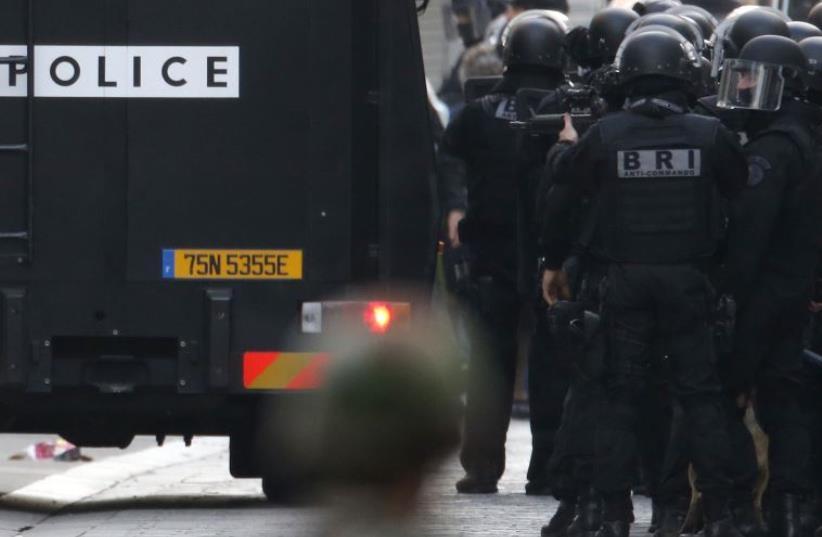 Members of French special police forces of the Research and Intervention Brigade (BRI) are seen near a raid zone in Saint-Denis, near Paris, France, November 18, 2015
(photo credit: REUTERS)
Advertisement
PARIS – The raid by French police this morning on a terrorist hideout in the Paris suburb of Saint Denis underlines the new approach adopted by local security authorities.Instead of escaping as far as possible from the Paris environs, it seems that several Islamic State terrorists, apparently involved in the attacks on the city last Friday, regrouped at the very same place where one of the Friday attacks took place, namely less than two kilometers away from the French stadium.According to sources cited in the French press, information received over the past 48 hours led the investigators to Saint Denis, directly to the apartment on Rue Corbillon, which surprised the French authorities.A French expert on Islam in France, Bernard Godard, told The Jerusalem Post that the security services are facing a new situation with a new modus operandi. “The methods used by Islamic State are much different than those of al-Qaida.They have apparently established in Europe a real network of communication, designed and operated by senior activists coming from the Syrian or Iraqi battlefields.’’ He notes that the two organizations target the same profiles when recruiting in European capitals.“They are looking for people who are almost outcasts, youngsters looking for an ideology, who are disconnected from their environment.They are not looking specifically into religious-Muslim households, because it is not really a religious issue. Often, these youngsters are ‘new converts’ – or youngsters who ‘re-Islamicized,’ so to say.’’ Godard thinks that Islamic State has bypassed al-Qaida in that sense, and is efficiently implanting cells inside Europe as part of a large network.A police officer to begin with, Godard has served many years as responsible for “the Islam portfolio’’ in the French Ministry of Interior, where he was known as “Mr. Islam.”He has recently published a book on this issue, titled The Muslim question in France. Today, he feels that the French Muslim community is facing an enormous challenge in dealing with the recruitment by Islamic State.“Paradoxically, the young activists operate in a more Western way. They are second and third generations of families which arrived in France from Algeria or Morocco. Their parents left behind them a Muslim country, and began integrating into the French secular society. But they are looking for an identity. This is what leads them to Islamic State hands. Still, they grew up in France, and they think differently than youngsters from North Africa.’’ Godard notes that in Wednesday’s raid a woman suicide bomber detonated herself near police officers.She was apparently watching over the apartment wearing an explosive belt. “North African society is a rather traditional, macho one. Islamic State is a macho infrastructure. It is different, for instance, than armed organizations in Chechnya, with many women fighters. But here we are talking about French, Belgian, German youngsters. We could certainly see more European women joining there.’’ Thus the French security and intelligence agencies are faced with terrorist cells which recruit efficiently, cross European borders easily, and integrate different nationalities, both men and women, into their networks.Godard believes that not only the French authorities, but also leaders of the Muslim community here, have a role to play in fighting the spread of Islamic State in France.“In the UK there seems to be a more unified Muslim community front. It is easier for them to tackle this issue with one voice. The French Muslim community is different. There are many steams, many different views of relationship between the secular state and Islam. And so, the Muslim community here finds it much more difficult to get organized in one campaign against the infiltration of extreme Islam organizations,” he says.For him, taking action is not a question of culpability, but a question of responsibility. There are many imams who say that the community must react strongly and work against this phenomenon. But there are also those who claim simply, “this has nothing to do with us.’’