Report: ISIS attack expected on Egypt-Israeli border in the next six months

“In the next six months they will try to carry out an attack and try to do something against Israel,” officer tells The Telegraph. 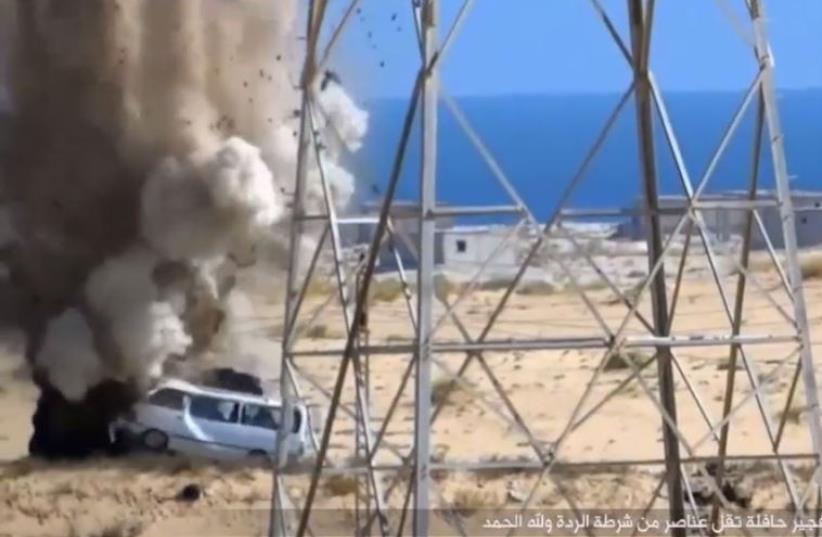 ISIS branch in Sinai reveals group's new weaponry‏
(photo credit: screenshot)
Advertisement
A senior Israeli military officer stated that Israel is expecting a terror attack from ISIS on the Egyptian border in the coming months, The Telegraph reported Friday. The officer, who spoke anonymously, said that ISIS's Sinai desert affiliate, Wilayat Sinai, had stolen various items from the Egyptian army, including armored vehicles and anti-tank missiles. He said that the weapons are expected to be used on Israel. The attack could happen anytime explained the officer. “In the next six months they will try to carry out an attack and try to do something against Israel,” stated the officer. In August former commander of the Sagi Brigade, which spans the Egyptian Border, Col. Yehuda Hacohen, told The Jerusalem Post's sister publication Ma'ariv that ISIS knows the Egyptians have improved their strategy, and is convinced that there will come a day when ISIS will turn their focus towards Israel."They say to themselves: 'first we will finish the infidels, than we will take care of the dogs'...We are a notch below the infidels," Hacohen stated. "The reason they have not done it yet is the deterrence. They can conduct attacks on us at any time on the border, but they are asking themselves if it is worth it.  They know we can take action against anyone. That doesn't mean they will not try in the future. In any case, we aren’t relying on being only a deterrence, we are preparing for any scenario."In an interview in March on Aaron Klein Investigative Radio, a weekend radio show broadcast on New York’s AM 970 The Answer and NewsTalk 990 AM in Philadelphia, Abu al-Ayna al-Ansari, a Salafist movement senior official in the Gaza Strip, said that Israel and the US are among Islamic State's chief targets.Earlier this year, Israel tightened security and built a new barrier along the Israel-Egypt border, after reports from sources close to the militant group have claimed to be planning attacks against Israel in the south. Prime Minister Benjamin Netanyahu praised the security coordination between Egypt and Israel, saying that without increased security efforts “we would have been overflowed by thousands of ISIS fighters from Sinai.”NOAM AMIR/MAARIV HASHAVUA and ROSIE PERPER contributed to this report.