Peres: Erdogan wanted to turn Turkey into Iran, and there's no room for another Iran

Former president says Obama administration has shown commitment to Israel's security and he is "ashamed" of heckling of Jack Lew at Jpost Conference. 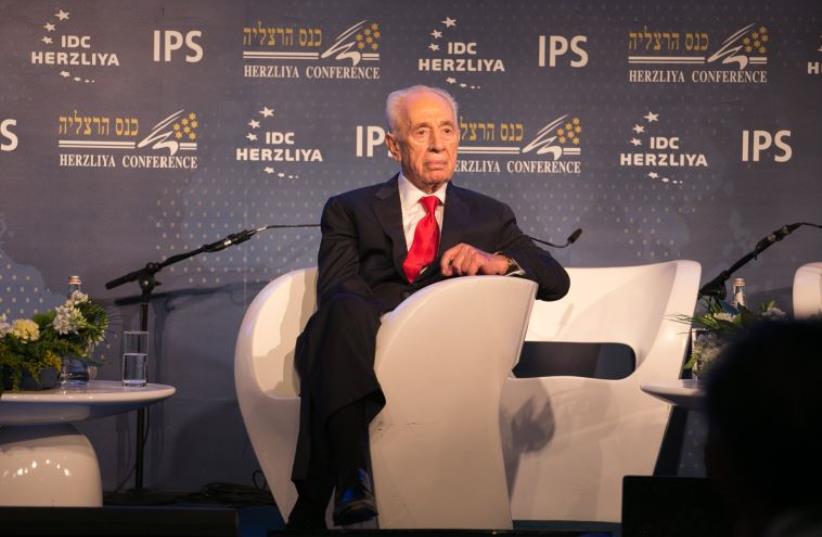 Former president Shimon Peres
(photo credit: EREZ HARODI - OSIM TSILUM)
Advertisement
Former president Shimon Peres expressed optimism on Monday after Turkish President Recep Tayyip Erdogan's AK Party failed to win an outright majority in Sunday's parliamentary elections, seemingly thwarting his plan to gain more power by changing the country's constitution and creating a powerful US-style presidency.Speaking at the IDC's 15th Annual Herzliya Conference, under the banner of "Israel in a turbulent Middle East," Peres said, "I am happy about what happened in Turkey - Erdogan wanted to turn Turkey into Iran, and there is no room for two Iran's in the Middle East."Peres called the Turkish election results, in which Erdogan's party won just over 40 percent of the vote and will be forced to cobble together a coalition with opposition parties, "a positive trend for Israel and the Middle East."The former president also expressed cautious optimism in regard to the emerging deal with Iran, saying that the measure of the deal is not just how many centrifuges Iran is allowed to retain, but how many countries are party to the deal and part of efforts to make sure Iran upholds its commitments.He praised US President Barack Obama for putting together such a wide coalition, which includes both Russia and China, but cautioned that the agreement can only be fully judged when all of its details are revealed. He said that the military option will always remain on the table.Peres further praised Obama for his commitment to Israel's security, saying that no previous president has shown such a level of commitment to Israel. Speaking of the boos showered on US Secretary of State Jack Lew at the Jerusalem Post Annual Conference in New York on Sunday, Peres said he was ashamed of such shabby treatment of a senior Obama administration official.The crowd of some 1,500 at the conference jeered Lew as he spoke of the Obama administration's commitment to Israel's security and its insistence that Iran not be allowed to obtain a nuclear weapon."The shouts at Jack Lew at the conference yesterday were shameful," Peres said. "Jack Lew is an Israel supporter and is not our enemy - why did they yell at him?" Peres asked.