Russia and the United States have hoped that the talks, set for January 25, would bring together Assad officials and rebel leadership around the same table. 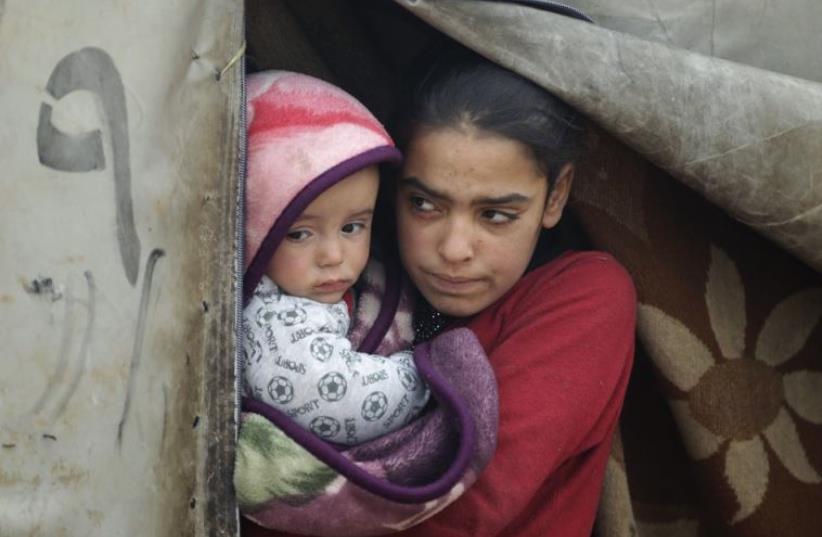 A girl carries her brother as she stands at the entrance of her tent during the cold weather in a camp for internally displaced people in Idlib province, Syria
(photo credit: REUTERS)
Advertisement
WASHINGTON – Negotiations toward a cease-fire in the Syrian civil war are still scheduled to begin next week, foreign ministers said in Davos, Switzerland on Thursday, despite continued threats from rebels fighting Syrian President Bashar Assad to boycott the event.Russia and the United States have hoped that the talks, set for January 25, would bring together Assad officials and rebel leadership around the same table. But even without the opposition represented, the talks will proceed, Moscow said.“What we are trying to achieve is to either expand the ‘Riyadh’ delegation to include the moderate opposition or to have a separate opposition delegation,” a Russian diplomat said. “They will negotiate with the government.”In recent weeks, US Secretary of State John Kerry has expressed notes of optimism, touting “progress” in the negotiations since the US, Russia, Iran, Saudi Arabia and several other states agreed to a joint statement outlining a peace process for the war-torn state.That document, the Vienna communiqué, proposes a cease-fire, followed by the creation of a unifying political transition. Ultimately, the goal would be for that transition council to hold nationwide elections within 18 months.But a disconnect remains between the world powers – who are invested in the outcome of the war one way or another – and the players directly affected on the ground: Assad, who appears keen on remaining in power, and the rebels fighting for his ouster, unenthusiastic over negotiating his future.Kerry, ahead of a meeting with Prime Minister Benjamin Netanyahu at the World Economic Forum in Davos, said, “The process will begin on the 25th and they will get together and see where we are.” He added that the first talks in Geneva will be ‘proximity talks,’ not faceto- face meetings.The United Nations’ special envoy to the crisis, Staffan de Mistura, was less optimistic: “I can’t tell you today,” he told CNN in an interview. “I will tell you on the 24th, one day before.”Iran’s foreign minister has said it was up to the UN to decide who represents the opposition, but he said 10 delegates at a recent opposition gathering in Saudi Arabia were members of al-Qaida – one of three groups he said must be barred.Reuters contributed to this report.