Analysts say that Russia is not ready to replace the United States as Middle East powerbroker. 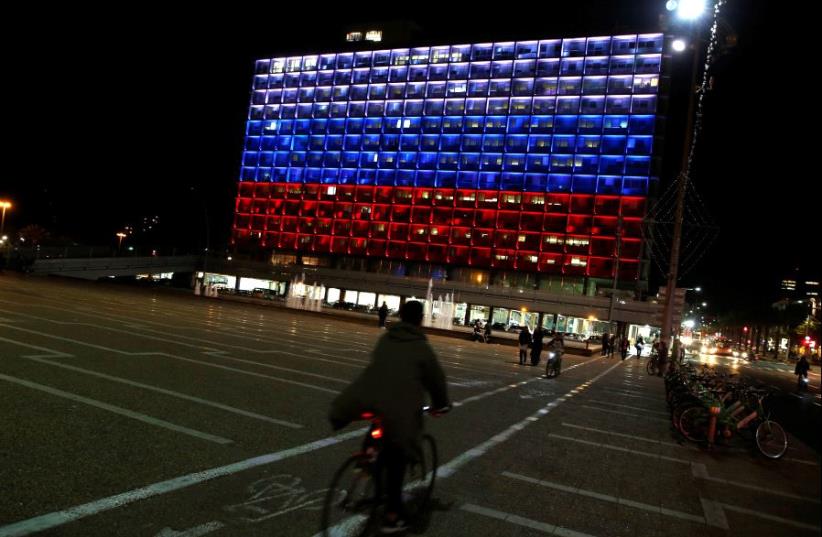 A man rides bicycle across the Tel Aviv city hall building as it is illuminated in solidarity with Russia after the blast in the St.Petersburg metro in Tel Aviv, Israel April 3, 2017
(photo credit: REUTERS)
Advertisement
Russia is reportedly attempting to organize a “mini-summit” between the United States and Palestinian officials in the coming weeks and is willing to set up a meeting between Israeli Prime Minister Binyamin Netanyahu and PA President Mahmoud Abbas.
According to reports, the goal of the prospective meeting is to provide Palestinian officials with the opportunity to propose modifications to US President Donald Trump’s Middle East peace plan, which, perhaps most significantly, envisions Israel’s annexation as early as July of about 30% of the West Bank.
Is there a new powerbroker in the Middle East?
Not so fast, say analysts.
“I don't think that Russia can play the role of the US,” Dr. Lior Lehrs, a policy fellow and director of the Program on Israeli-Palestinian Peacemaking at Mitvim, the Israeli Institute for Regional Foreign Policies.
Under previous administrations, the US took the lead in peace initiatives but that position, according to Lehrs, has changed in the years following Donald Trump’s election to the presidency in 2016.
“It was always the United States leading the process but in the last years you have this vacuum because the Trump Administration cannot play this role as a mediator; he changed this policy,” Lehrs said.
Officials from the US and Russia, along with the European Union and United Nations, held a video-conference Friday to discuss the proposed meeting between the US and the Palestinians, which would also reportedly include other countries, thus the term “mini-summit.”
The involvement of the Middle East Quartet – the EU, UN, US and Russia – and officials from Egypt, Jordan, Saudi Arabia and the United Arab Emirates, is an attempt by Russia to bring the Palestinian Authority to the table. Abbas has imposed a blanket boycott on PA dealings with the US administration since December 2017 when Trump recognized Jerusalem as Israel’s capital and moved the US Embassy there.
Another obstacle to arranging the “mini-summit” is the Trump peace plan. Abbas said that the Palestinians would not participate if Trump’s plan were the basis for negotiations. The White House wants the Trump plan to be the basis for any meeting.
Last Tuesday, Abbas declared all past agreements with Israel and the US null and void, citing as the primary reason Netanyahu’s vow to press ahead with applying Israeli sovereignty over Palestinian-claimed territories. Abbas said that by pursuing such a move, Israel had “annulled” the 1993 Oslo Accords, which established the PA and jump-started direct peace negotiations.
According to the unity coalition deal recently struck between the right-wing Netanyahu and his centrist rival, Benny Gantz, the prime minister can as of July 1 hold a vote on annexation in either the cabinet or the entire parliament. A six-member US-Israeli committee is presently mapping out areas in the West Bank that would be incorporated into the Jewish state, although mixed signals have been emanating from Washington about when the process will be completed and, as a corollary, the green light given to Jerusalem to press forward.
“There would be no advantage at all for the United States to bestow legitimacy on Russian-led negotiations or even Russian-led negotiations with UN backing,” Jonathan Schanzer, senior vice president for research at the Foundation for Defense of Democracies, told The Media Line. “This would run counter to the Trump Administration's strategy. I don't see it.”
Schanzer pointed out the hypocrisy of Russia’s concern over Israel applying sovereignty to the Jordan Valley given that international sanctions were imposed against Russia following the 2014 annexation of Crimea and military involvement in Ukraine.
“The Israeli situation is one of a decades long ambiguity where international law is far from settled as opposed to the Russian-Ukraine situation where Russia has been under international sanctions for what was clearly aggressive action. So the idea that somehow Russia would try to intervene and mediate seems a bit rich to me,” Schanzer said.
The Russian Foreign Ministry confirmed in a statement that during a phone conversation on Saturday, Russian Deputy Foreign Minister Mikhail Bogdanov told PA Civil Affairs Minister Hussein al-Sheikh that Russia was ready to organize the meeting between Abbas and Netanyahu.
Schanzer said that Russia’s recent foray into Israeli-Palestinian peacemaking must be seen in the context of the country’s efforts to supplant the United States as the primary powerbroker in the Middle East.
But, according to Schanzer, there are tensions in Russia’s relationship with Israel given its history of supporting Israel’s adversaries, from Hamas to Iran to Hezbollah.
Perhaps the biggest challenge for Russia in gaining concessions from Israel is what former US President Barack Obama called the “unbreakable bond” between the two nations.
“Russia is trying to do something but I don't think that they have the ability or the tools or want to play this role, especially the main idea was that the US had a special relationship with Israel,” Lehrs said. “That's why they are the only one that can have an impact on Israel.”