Russian forces seize US gym equipment and abandoned food at one base, grabbing a US-built airstrip south of Kobani 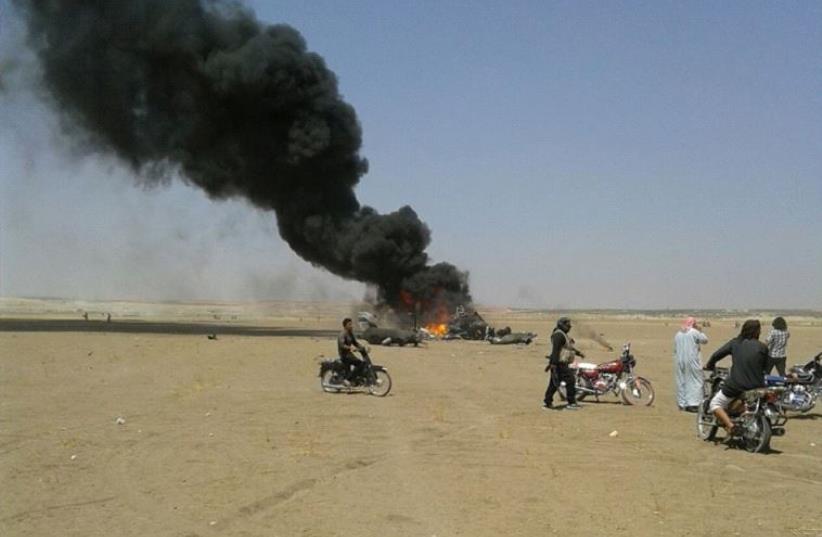 Russia says one of its helicopters shot down with 5 aboard in Syria
(photo credit: ARAB MEDIA)
Advertisement
Rarely in Russian history have Russian troops swept in to former US bases but in Syria it has been happening more frequently, as the US completes a tactical redeployment away from border areas with Turkey, and hands over Syrian soil to the Syrian Arab Army (SAA) and its Russian backers.Video emerged on Friday showing Russian forces at former US bases. Russia has set up a helicopter base near Qamishli as well, Russia’s defense ministry told a local channel.On Friday, Russian forces claiming to be military police swept in on helicopters to the Sarrin and Sabt bases south of the city of Kobani. They wore black masks to obscure their faces. These bases are beyond the 30 km. limit that Russia and Turkey have agreed upon as part of a deal on October 22 that was supposed to permit Turkey to take over a swath of eastern Syria.The US withdrew from part of eastern Syria on October 6. Turkey then attacked US-backed Syrian Democratic Forces, a partly Kurdish force fighting ISIS. Then the US tried to beg Turkey to pause its attack and invited Turkey’s president to Washington. Turkey went to the Russians, with whom it is working on the S-400 air defense deal and other deals, and worked out an arrangement that Turkey would get a piece of Syria, and Russia and Turkey would conduct joint patrols.Since then the US has decided it now wants to secure Syrian oil so that the SDF can have some oil to keep housing 10,000 ISIS prisoners for the US-led coalition. In this bargain is a complex deconfliction space in northern Syria now. US forces, including Bradley armored vehicles, have driven through Syrian regime checkpoints. Russians are deployed in other areas. The Assad regime is moving into some border areas. The SDF is still fighting Turkey near the town of Tel Tamir. From a tactical point of view, it’s a complex and explosive nightmare waiting for someone to make the first error. But it is in everyone’s interest to play nice with the Americans and Russians so as not to anger the bears. The SAA, SDF and Turkish-backed Arab militias fight each other, while the big former Cold War powers drive around and watch.That was what happened on Friday. But it’s not just about watching. The US quit its Sarrin base abruptly during the fighting after October 9. Then it went back to remove some equipment. The Russians got there after the Americans had gone but still found a trove of Americana. Mountain House chicken teriyaki was still on an old table. “Who doesn’t like it,” the Mountain House website says. It’s a favorite takeout item of the Tangent, Oregon-based company. Little did it know its food would be captured by Moscow and could be reverse engineered.Russia also captured some US gym equipment. Also found was a machine designed for leg workouts, rarely used because so many servicemen skip “leg day” workouts, and a fridge. A broken shisha pipe was discovered, according to a video posted by the Russians. A baseball bat lay next to the shisha. Water bottles of a GSA long-term contract holder was also abandoned, left inside their giant carton.The Russian seizure of the abandoned US bases has been seen as a failure by some online. Former anti-ISIS envoy Brett McGurk noted that the Russians now have an airstrip the US built in Syria.