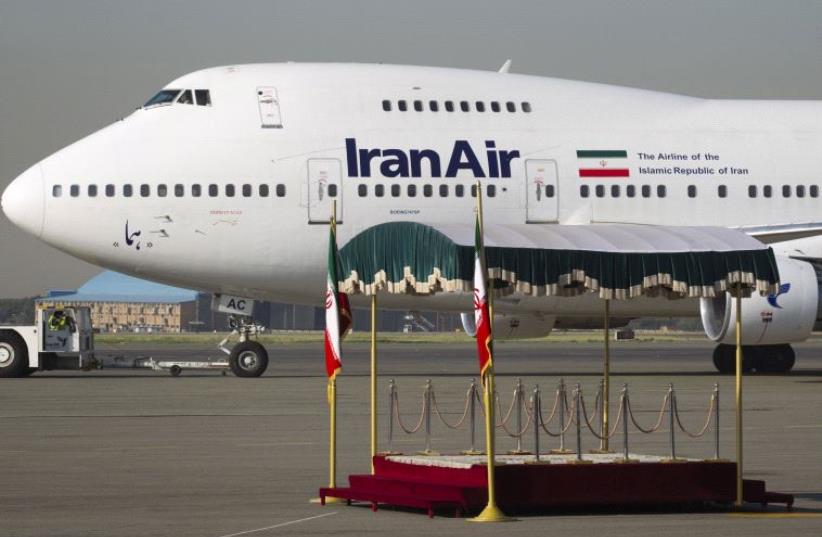 The IranAir Boeing 747SP aircraft with Iran's President Mahmoud Ahmadinejad onboard is pictured before leaving Tehran's Mehrabad airport en route to New York September 19, 2011.
(photo credit: REUTERS)
Advertisement
PARIS - Iran's return to the world economy is helping planemakers cope with a downturn in global demand, providing homes for airplanes orphaned by reversals in the growth plans of airlines elsewhere.
Planemakers are also gambling that the early delivery of such aircraft could help prop up a nuclear sanctions deal between Iran and world powers, threatened by conservative opponents in both Washington and Tehran, Western sources said.
Since sanctions were lifted under the deal to reopen trade and curb Iran's nuclear projects, the Islamic Republic, trying to boost its economy after years of isolation, has joined a waiting list of up to eight years for 200 new aircraft.
But efforts to meet its most immediate needs have been boosted by financial problems facing other airlines across the globe as new airplanes come onto the market at bargain prices.
"We hunt opportunities in the market. If there are opportunities, we can take advantage of that," Deputy Roads and Urban Development Minister Asghar Fakhrieh-Kashan told Reuters.
Despite denials by manufacturers that the downturn is hurting, Iran's return to the market has brought to light pockets of surplus aircraft. With presidential elections looming in May and keen to show the 2015 nuclear deal is working, Iran has proved only too keen to take up the slack.
So far it has taken delivery of three Airbus jets. Industry executives say they were left on the planemaker's books when their Colombian buyer, Avianca, balked at taking delivery. Such orphan planes are often known as 'white tails'.
Last week, Iran also signed a deal for 20 ATR turboprops.
Unusually in a risk-averse industry with high costs, four of those are already built and ready to be delivered: short-circuiting their usual l8 months' waiting time.
Although it denies they are white tails, ATR took the rare decision to build them for IranAir before the final contract was signed. Analysts say that too is a signal of market weakness as manufacturers wrestle with weakness in developing economies.
TURKISH SWAP
The sudden reshuffling suits both sides as Iranian President Hassan Rouhani tries to demonstrate results from the nuclear deal, opposed by hardline candidates in May elections.
It also holds up a mirror to geopolitical changes in the region, played out in the fortunes of national carriers.
While Iran's aviation industry is coming out of decades of cold storage as sanctions are lifted, Turkey has seen a slump in travel demand after a failed coup and attacks in major cities.
Now, Turkish Airlines is having doubts about taking one of the industry's key growth engines, a 350-seat Boeing 777-3000ER.
Uncertainty over next month's scheduled delivery contrasts with Iran's urgent need for the same model, the first of which is due to be delivered to Tehran in April or May next year.
At Boeing's suggestion, Iranian representatives are now inspecting the Turkish configuration to see whether the airlines could swap deliveries, Fakhrieh-Kashan confirmed.
Boeing declined to comment.
Iran has ordered 15 777-300ERs as part of a deal for 80 Boeing jets. They are crucial to Boeing's efforts to steady declining 777 production, pending the arrival of a new model.
Bringing forward Boeing's first delivery to Iran since the 1970s could also provide broader momentum to the sanctions pact, hampered by funding problems and uncertainty about the attitude of U.S. President Donald Trump who has said he dislikes it.
Since all planemakers need U.S. export licenses due to the number of U.S. parts in their planes, any decision to block the Boeing deals would likely halt European activities in Iran too.
"It helps to bring Boeing to the same table as everyone else," said a senior European industry executive, referring to the talks to swap Turkish and Iranian deliveries.
Iranian officials have however been forced to defend the reshuffling from suggestions that Iran is getting cast-off airplanes. They stress the Avianca jets, for example, had been sitting unused for two years and had never flown commercially.
"It is good for Airbus and Boeing, but this is part of the game that everyone knows," Fakhrieh-Kashan told Reuters.