Satellite imagery detects heat flash at location of crash, hints that explosion occurred on-board, rules out plane being brought down by missile. 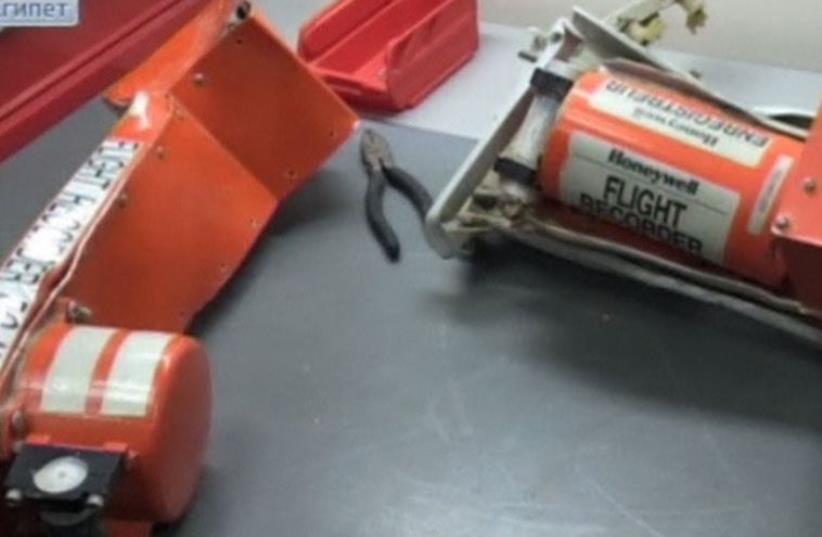 Russian TV shows still of black boxes from plane crashed in Egypt
(photo credit: REUTERS)
Advertisement
US officials ruled out Monday the possibility that a surface-to-air missile brought down a Russian commercial airline in Egypt's Sinai on Saturday, killing all 224 passengers on board, according to a report by NBC News. Officials said that satellite imagery identified a heat flash at the point where the aircraft crashed, leading analysts to believe that an in-flight explosion, rather than external tampering, may have brought down the the plane.
Sinai plane crash: Did ISIS do it?
"The speculation that this plane was brought down by a missile is off the table," an official told NBC. Yet the possibility that the explosion was fueled by an on-board terror attack has not been ruled out. The Russian Airbus A-321, operated by the airline Kogalymavia with registration number KGL-9268, was flying from the Sinai Red Sea resort of Sharm el-Sheikh to St Petersburg in Russia Saturday when it went down in a desolate mountainous area of central Sinai soon after daybreak.It took off at 5:51 a.m. Cairo time and disappeared from radar screens 23 minutes later, Egypt's Civil Aviation Ministry said in a statement.The plane was at an altitude of 31,000 feet when it vanished from radar screens. It was completely destroyed and all those on board died.The circumstances of the crash are still under investigation. Reuters contributed to this article.