US to advocate broad Gulf security consolidation at summit 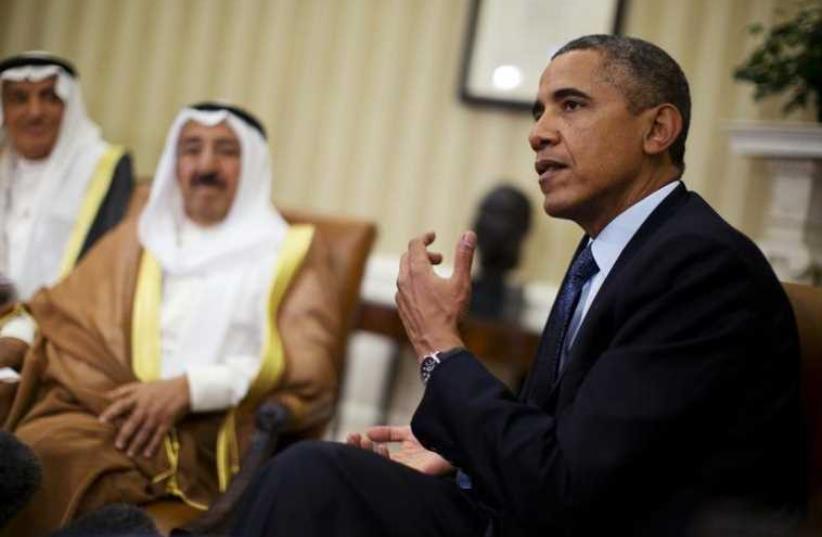 US President Barack Obama meets Sheikh Sabah al-Ahmad al-Jaber al-Sabah, Kuwait's emir, in the Oval Office of the White House in Washington
(photo credit: REUTERS)
Advertisement
WASHINGTON – The US is likely to renew its call for a coordinated missile defense system throughout Gulf Cooperation Council countries at a summit with its leadership at Camp David next week.That proposal, from US President Barack Obama, is not new. But unique to this summit will be a push from the United States for comprehensive, Gulf-wide security cooperation and defense interoperability, to counter new tactical threats from Islamic State terrorists and strategic challenges from Iran.No specific proposals have been finalized yet for the summit, which is to take place next week at the White House and at the Maryland retreat. But one US official says the president would like the conversation to extend beyond missile defense to areas where – should he succeed – the whole Gulf defense structure would be greater than the sum of its individual parts.That means consolidating Gulf air force, navy, missile defense, border security and counterterrorism strategies across agencies and nations, the official said.The summit is intended to provide assurances to Arab nations wary of a pending deal with Iran over its nuclear program. Sunni governments in the region fear a nuclear deal may embolden Tehran, enriched by sanctions relief, to increase its activities elsewhere in the region, undermining their interests.No plans are in the works for a parallel summit with the Israelis, the official added, noting that a government has yet to be formed. But the official noted that, as always, security cooperation between the US and Israeli defense establishments continues.The Gulf Cooperation Council, consisting of Saudi Arabia, Kuwait, Bahrain, Oman, Qatar, and the United Arab Emirates, was founded largely as an economic union. But security has since become the council’s top priority as threats have become complicated in recent years.Obama goes to Camp David infrequently but has held conferences there in the past, including in 2012 for the 38th G8 summit.