By DANIEL KLEO GIOSUÈ EISENBUD
Greek 'curse tablet' 370
(photo credit: Clara Amit/Israel Antiquities Authority)
Advertisement
Revenge has long played a prominent role in the annals of literature, the Bible and, of course, life.In one of Shakespeare’s most memorable monologues in The Merchant of Venice, a scorned Shylock warns his Venetian antagonists Solanio and Salarino: “The villainy you teach me I will execute, and it shall go hard, but I will better the instruction.”In Psalms 94, King David beseeches God for vengeance upon his enemies, imploring him, “How long shall the wicked triumph?” Indeed, in everyday life, one need only read the pages of this newspaper to find a plethora of real-time examples of such enmity.However, while vengeance may be as old as time, the Antiquities Authority recently proved it can also be “magical” – upon uncovering a 1,700-year-old curse, inscribed in Greek, on a rolled-up lead tablet by a “sorcerer” or “wizard” in Jerusalem’s City of David.According to an authority representative on Wednesday, the sheet of lead was discovered a few months ago in one of the rooms of an enormous building from the Roman period, located in the Givati parking lot.A translation of the sheet’s ominous contents – found in the structure constructed during the third century CE and destroyed in an earthquake in 363 CE – was not made public until a few days ago. 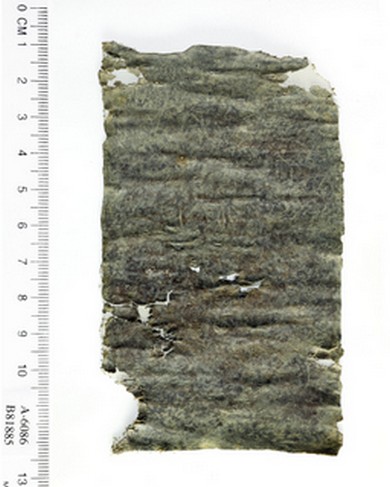 Clara Amit/Israel Antiquities Authority
Dr. Doron Ben-Ami and Yana Tchekhanovets, the excavation directors on behalf of the authority, said it was subsequently determined that the finding is “a curse tablet,” bearing a spell that was likely written by a sorcerer on behalf of an aggrieved female client named Kyrilla.The lead tablet, which Ben-Ami said resembled a small narrow pipe, was brought to the authority’s laboratories to be delicately opened and examined. After several days of toiling, Lena Kupershmidt, an authority conservator, was the first person to set eyes on the ancient script since it was rolled up some 1,700 years ago.“She needed much patience and nerves of steel to open the lead tablet, because any attempt to do so quickly might have caused permanent damage to the inscription,” said Ben-Ami.He added that when the tablet was finally unrolled, it was in an excellent state of preservation, and included a Greek cursive inscription that covers the entire surface of one side of it, as well as a portion of the other side.The tablet was then sent for analysis and deciphering to Dr. Robert Daniel of the University of Cologne, Germany, a world-renowned expert in the field.According to Daniel, the inscription invokes the curse Kyrilla cast on a man by the name of Iennys, likely in the wake of a legal dispute, although the true nature of the conflict remains unclear.Daniel said he believes Kyrilla commissioned a “professional sorcerer” to pen the words. He said the sorcerer calls upon the help of the gods of the underworld – including Pluto, Hermes Persephone and the Mesopotamian goddess Ereshkigal – to assist her.“I strike and strike down and nail down the tongue, the eyes, the wrath, the ire, the anger, the procrastination, the opposition of Iennys,” one portion of the tablet reads.“What we have here might be a metaphorical description of actions taken by Kyrilla designed to gain control over her legal opponent,” said Daniel. “At the same time, we cannot rule out the possibility that writing the text on the tablet was literally accompanied by Kyrilla striking the image of Iennys with a hammer and nails in a kind of ancient voodoo ritual.”Daniel said Kyrilla likely hid the tablet in Iennys’s home, located on the second floor of the excavated building. Alternately, he opined, a courtroom where the trial of Kyrilla and Iennys was conducted may also have been situated in the area it was found.“Kyrilla evidently concealed the object shortly before the structure was destroyed in the earthquake, after which the building was abandoned and never reinhabited,” said Daniel.According to Ben-Ami and Tchekhanovets, a number of other artifacts from this period were also recovered from inside the ruins of the Roman building’s northeastern corner.Apart from the lead tablet, the archeologists found a large amount of roof tiles stamped with the impression of the Tenth Legion, which was garrisoned in the city following its destruction in 70 CE.Ben-Ami added that bone and ivory objects, ceramic figurines and other finds attesting to the “rich material culture of the structure’s inhabitants” were also discovered.The excavation was funded by an Ir David Foundation fellowship.