Despite Abbas's statement that recognition "out of the question," over three quarters of Israeli Jews believe it is crucial.

By GIL STERN STERN HOFFMAN
Netanyahu and Abbas
(photo credit: REUTERS)
Advertisement
An overwhelming majority of Israelis support Prime Minister Binyamin Netanyahu’s insistence that the Palestinians recognize Israel as a Jewish state, according to a poll released Tuesday by the Israel Democracy Institute and Tel Aviv University.PA President Mahmoud Abbas told the New York Times over the weekend that recognizing Israel as a Jewish state was “out of the question.” 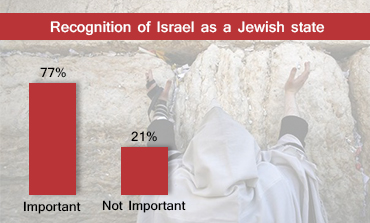 Recognition of Israel as a Jewish state
Netanyahu told the Likud Beytenu faction Monday that without such recognition there would be no deal with the Palestinians.As part of a framework agreement with the Palestinians, 77 percent of Israeli Jews believe it is important that the Palestinians recognize Israel as the state of the Jewish people, while 21% believe it is not important.Divided by political affiliation, 77% of the Right believe recognition is important whilst 84% of the Center and 63% of the Left believe in the importance of recognition.Among those who believe recognition is important, 41% said recognition of the basic principle of Zionism was paramount for them, 29% said such a declaration was needed to help Israel counter a demand that it become a “state of all its citizens,” and 19% because it would be compensation for Israel recognizing the Palestinian state as the state of the Palestinian people.Israeli Jews are firmly against accepting Palestinian refugees, with 81% opposing the allowance of a limited number of refugees to return to Israel as part of a final peace agreement and 74% opposing acknowledging partial responsibility for Palestinian suffering, such as the refugee problem.Foreign Minister Avigdor Liberman’s proposal for land swaps divided the Jewish population, with 51% against the proposal and 43% in favor. According to his plan, Israel would annex settlement blocs while giving the Triangle (a concentration of Arab towns and villages) and Arab-populated parts of the Galilee to the Palestinian state as part of a peace agreement.Of those surveyed, 86% believe that chances that Liberman’s proposal would be accepted by the Palestinian Authority are low and 85% believe it is unlikely Israeli Arabs will accept the plan.More than half the Israeli Jews surveyed believe that chances are high that calls for an imposition of economic and other sanctions on Israel will intensify, while 47% believe such chances are low.By political self-identification, 42% of the Right see chances as high, 52% of the Center and 71% of the Left.The survey of 609 respondents, who constitute a representative sample of the adult Jewish population of Israel, was taken last Tuesday and Wednesday. The measurement error for a sample of this size is 4.5%.