Netanyahu says religious freedom a basic institution in Israel, after vandals spray-paint "Jesus is a monkey" on monastery.

By JPOST.COM STAFF
SEPTEMBER 4, 2012 16:07
Netanyahu 370
(photo credit: Moshe Milner/GPO)
Advertisement
Prime Minister Binyamin Netanyahu on Tuesday condemned the so-called "price-tag" attack by right-wing extremists against a monastery in Latrun, the first of its kind since the evacuation of Migron earlier this week."This is a criminal act and those responsible must be severely punished," Netanyahu said. "Religious freedom and worship are two of the most basic institutions in Israel."Police suspect right-wing extremists of vandalizing the monastery outside Jerusalem early on Tuesday morning in a price-tag attack - an act of violence by right-wing activists against Arabs aimed at deterring Israeli leadership from acting against the settlement enterprise. The vandals spray-painted “Jesus is a monkey” and the words “mutual responsibility” with a list of the illegal outposts of Upper Migron and Maoz Esther in large orange letters on the outside of the monastery.The vandals also burned the wooden door at the entrance to the monastery. The attack happened at around 3:30 a.m. and was quickly discovered by monks, who notified police. 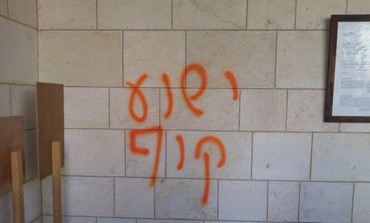 Reads: 'Jesus is a monkey'
Defense Minister Ehud Barak condemned the attack and issued a call "to the Shin Bet (Israel Security Agency), the police  and state prosecution to tackle Jewish terrorism.""This must be fought with an iron fist, and we must put an end to these severe phenomenon that stain the name of the state of Israel. We are obligated to uproot this phenomenon," Barak added.Labor Party leader Shelly Yacimovich called the attack "hooliganism and racism," and added that such acts damage Israel's image. She also noted that the monastery had been a welcoming place for Israeli visitors for decades, and the fact that it was hit by vandals indicates "extreme hatred [by the attackers] for anyone and everyone, regardless of their political position."She commented: "The vandalism was perpetrated by an extreme minority that does not represent Israeli society, nor all the settlers. They are damaging Israel's image," and called on the Shin Bet (Israel Security Agency) and the police to find the assailants and bring them to justice. 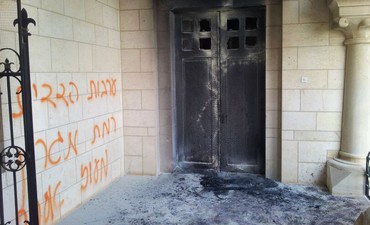 The Tag Meir group condemned the attack in a statement released by the organization's chairman Dr. Gadi Gvaryahu. Tying it to other actions allegedly taken by right-wing nationalists, the group said: "The hand that desecrated the Laturn monastery this morning is the same hand that threw the Molotov cocktail at Palestinian family in Bat Ayin, which is the same hand that carried out a lynching of Arab youths in [Jerusalem's] Zion Square, which is the same hand that desecrated and ignited more than ten mosques and churches in the past two years, and is the same hand that wrote the racist Torat Hamelech book."Jerusalem police spokesman Shmuel Ben Ruby said that police immediately formed a special investigative unit to find the perpetrators. Eight policemen are assigned to the special unit, he said. Ben Ruby added that police are currently investigating a number of different areas in order to determine if more price-tag attacks are planned for the next few days. Melanie Lidman and Yaakov Lappin contributed to this report
Advertisement
Subscribe for our daily newsletter