Mama” Alex Buckman was only four years old when Mme. Andrée Geulen, a 20-year-old Brussels school teacher who saved many Jewish children, hid him from the Nazis. 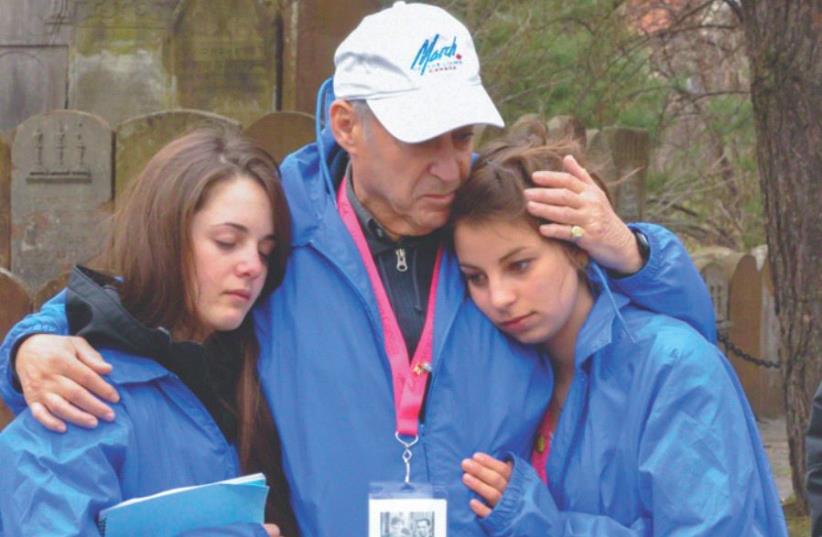 Suvivor Alex Buckman and two students on the 2010 March of the Living
(photo credit: MONIQUE DE ST CROIX)
Advertisement
On a fateful day in 1943, before he was handed over to Mme. Geulen, his father kissed him for the last time.“Where is Mama?” Alex asked his father, who pointed to the bedroom. Alex ran toward the bedroom, but the door was locked.The boy did not understand why, since there were no locks inside the house. Alex never saw his parents again; they were both murdered in Auschwitz.“So in my mind, as a child, I never said goodbye to my mother,” Alex said.“We are in 2010 [on the March of the Living] in a room (the former gas chamber in Auschwitz- Birkenau) where my mother and her sister were waiting for the showers. Obviously there was no water, as the Nazis placed poison above the shower heads. They [the guides] told us that the women became hysterical because they did not see the water, so they ran toward the walls and scratched the walls with their fingernails. I turned around and caressed the walls so I could still feel the scratches these women had made… maybe my mother had done the same thing. As I caressed it, I said: ‘Au revoir, Mama,’ because I never got to say goodbye when I was a child.”Many years later Alex reunited with Mme.Geulen (now 93 years old) and found out from her that indeed the bedroom door had not been locked. His mother held the doorknob and would not let go.“She didn’t want to see you because she was afraid she was going to keep you. Instead of that, she let you go and saved your life,” Mme. Geulen explained.