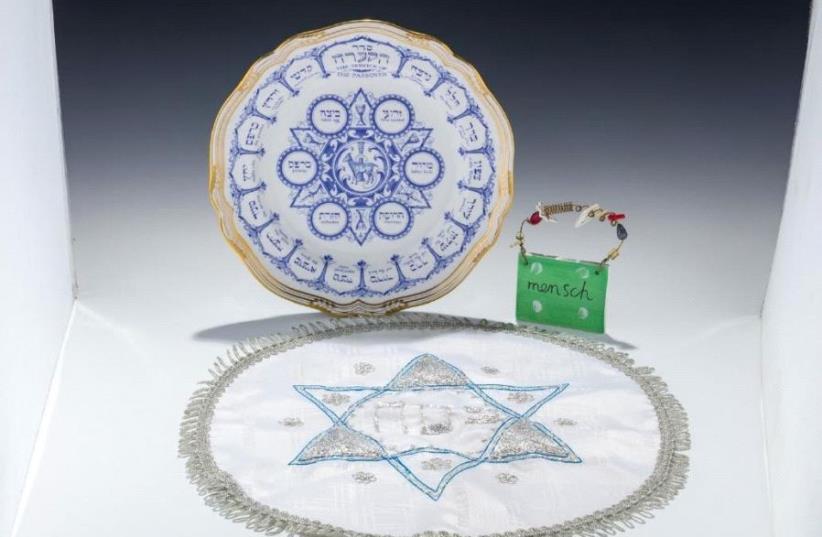 Seder set belonging to the late comedian Joan Rivers
(photo credit: JGREENSTEIN.COM)
Advertisement
When faced with the chance to own a Seder plate that once belonged to the late comedy icon Joan Rivers – a group of auction attendees said “no thanks.”The item went unsold in an auction held by J. Greenstein and Co. in New York on Tuesday night.The plate – which came with a matza cover – was made by the Spode company of Britain. Bidding for the item was opened at $2,800 (though a similar plate retails on Spode’s website for $120). Rivers died after surgery complications in 2014. Her estate auctioned off many of her private belongings in June 2016.But another exciting item in Tuesday’s sale – a French ID card that once belonged to Zionist leader Ze’ev Jabotinsky – sold for $20,000. Bidding for the item began at $16,000.Speaking to The Jerusalem Post last month, Jonathan Greenstein estimated the ID card would go for even more.“With any antique and with any piece of ephemera or anything that’s valuable...my instinct is based on similar things that have sold in the past,” he said at the time.“The problem with Jabotinsky’s ID card is that nothing similar has ever sold in the past... there’s not another one on the planet.”The ID card, issued in 1938, contains Jabotinsky’s original photo and signature, the auction house said. It lists his profession as journalist and indicates he was a refugee from Russia.Other items that went for a high price include Judaica from the 18th and 19th centuries. A megilla scroll case from Poland circa 1800 sold for $28,000, while a sunflower- shaped spice container from 1854 went for $27,000. A silver Torah shield, from Fuerth, Germany, in 1792, engraved with two lions and a menorah, sold for $26,000.In September, the auction house sold the late Rabbi Shlomo Carlebach’s piano for $20,000.