A round up of news from around Israel. 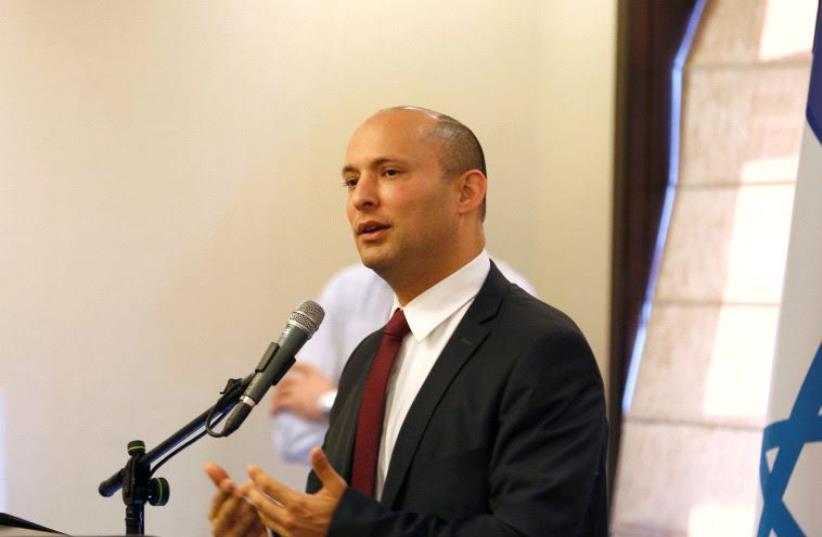 Naftali Bennett
(photo credit: REUTERS)
Advertisement
■ GOVERNMENT MINISTERS are not supposed to accept personal gifts, but how could Education Minister Naftali Bennett refuse to accept a gift of his family tree dating back to the 18th century? The occasion was at the conclusion of his visit to Beit Hatfutsot – the Museum of the Jewish People on the campus of Tel Aviv University. The presentation to Bennett was made by Irina Nevzlin, who chairs the board of directors of Beit Hatfutsot, the museum’s CEO, Dan Tadmor, and the director of the Israel Friends of the Museum, Adi Akunis.Bennett was born in Haifa to American immigrant parents whose family roots extend across America and to different parts of Europe. His ancestors first set foot in the United States toward the end of the 19th century. His more distant background seems to be mostly in Poland and Holland. The family tree was created replete with photographs and biographical information.Prior to receiving so important a document for his family, Bennett toured Beit Hatfutsot, including the new wing of the museum, which contains exhibits of synagogues, Ethiopian aliya and heroes of the Jewish people.While touring the galleries, Bennett chanced upon a visiting group from Masa, the Israel Journey, which offers a range of activities and opportunities to young Jewish high school graduates from abroad. The youngsters told him about their experiences in Israel and noted the huge gap between Israel’s image abroad and the reality on the ground.■ THIS YEAR marks the 65th anniversary of the establishment of diplomatic relations between Israel and Japan. Very close ties are maintained by Israeli diplomats who served in Japan and Japanese diplomats who served in Israel.Eli-Eliyahu Cohen, a former ambassador to Japan, who was the first such Israeli appointee to Japan who was not a career diplomat but a former Knesset member, will deliver the Friday lecture on March 10 at the Japanese Embassy in Tel Aviv. Cohen, who served as ambassador from 2004 to 2007, was a political appointee designated by both the prime minister and the foreign minister.He will discuss how personal knowledge can be advantageous to the success of a mission. He will also talk about behind-the-scenes activities related to the visits to Israel by former prime minister Junichiro Koizumi and the Sadogatakebeya Sumo wrestlers. Cohen will also talk about lectures given to the priests of Isse Shrine, the Koyasan Temple, and will share several anecdotes about life in Japan for an ambassador of Israel.Earlier this week, two Israel investment conferences took place in Japan, one in Osaka and the other in Tokyo, with the main focus on life sciences. The conferences were initiated by the Foreign Investments and Industrial Cooperation Authority of the Economy Ministry and Israel’s trade mission in Japan.■ THREE YEARS ago, Tel Aviv-based fashion designer Sharon Tal revived the once famous Israeli brand name Maskit, with the encouragement of Ruth Dayan, who had founded the company, which projected Israel’s melting-pot fashion and craft image to the world.Maskit, a government-sponsored company, was essentially created to provide new immigrants with a source of livelihood. Many of them had minimal education, and therefore lacked qualifications for most professions, but they came with expertise in the traditional arts and crafts of their respective countries, and Dayan helped them to set up cottage industries, the products of which were marketed and sold under the Maskit label. Maskit fashion was a kind of East-West fusion, with Western-trained designers incorporating Yemenite embroideries and colorful Moroccan weaves into their creations.Founded in 1953, Maskit was privatized in the early 1990s and in 1994 went bankrupt. There were occasional retrospective fashion shows featuring Maskit designs, and many women who owned Maskit garments continued to treasure them.Enter Tal, who had been the head designer for embroideries at Alexander McQueen. After coming home for the birth of her first child, she decided she wanted to do something for Israel’s fashion industry and for herself. Having studied ancient embroidery techniques she wanted to share her knowledge.At the suggestion of her husband, Nir, she went to see Dayan. They spoke about the possibility of reviving Maskit, and with Dayan’s encouragement and input, that’s what happened, and the first showing of the new Maskit collection in 2014 earned extremely favorable reviews at home and abroad.Since then, Maskit has become firmly entrenched in Israel’s fashion scene.This week, in celebration of Dayan’s 100th birthday, Tal brought her a bottle of whiskey. Dayan is known for her fondness for whiskey, but the bottle brought by Tal contained a brew that Dayan had not tasted before. It came from the Milk and Honey Distillery, which is Israel’s first whiskey distillery and is located in Tel Aviv.