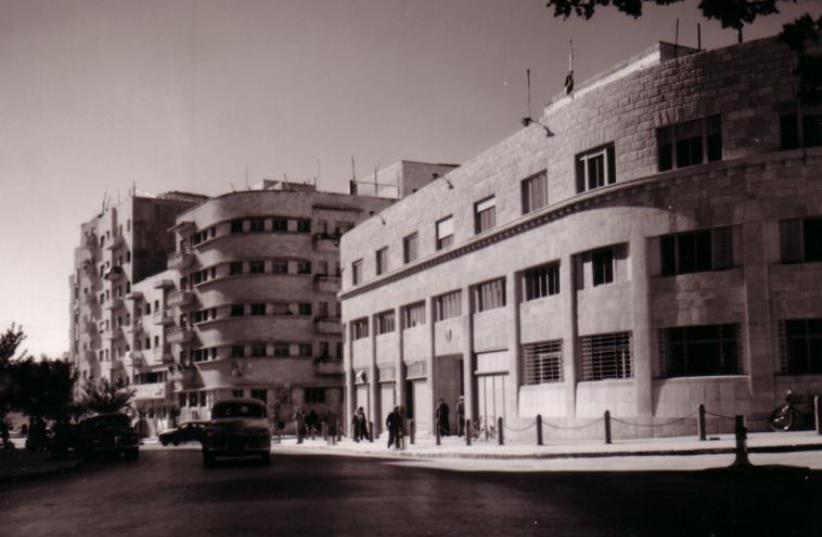 Froumine House, King George St., jerusalem, early 50s
(photo credit: Wikimedia Commons)
Advertisement
• AT LEAST two new museums are scheduled to open in Israel in 2017: the Knesset Museum in Jerusalem and the Australian and New Zealand Army Corps (ANZAC) Museum in Beersheba.The Knesset Museum project, which is being headed by Hadassah Greenberg-Yaakov and curated by Michal Broshi, involves the almost total restoration of the old Knesset building on King George Street, which later served the Ministry of Tourism and more recently the Rabbinical High Court and the Jerusalem District Rabbinate. Originally intended as a residential and commercial complex, the building is known to this day as Beit Froumine (Froumine House). Its construction began before the establishment of the state. Property developer Nissim Azriel, married to Lisa Froumine, whose family owned a highly profitable biscuit company, wanted the ground floor of the building to serve as a branch of a bank and the two upper floors to serve residential purposes.He had actually intended to move in there with his wife and children. When David Ben Gurion, Israel’s founding prime minister, decided to transfer the Knesset from Tel Aviv to Jerusalem, he and his aides scouted for suitable premises, choosing Beit Froumine because of the size of the ground floor.It was not until 1966 that the Knesset moved to its permanent home, the construction of which was financed by James de Rothschild, who in his will bequeathed six million Israeli pounds towards the construction costs. In a letter addressed to Ben Gurion, he had written that it was his hope that the new building would become ‘a symbol in the eyes of all men of the permanence of the State of Israel’. His widow, Dorothy de Rothschild, oversaw the implementation of the project.The Knesset Building was dedicated on August 30, 1966.Coincidentally, another member of the British branch of the Rothschild family – Walter, the second Baron Rothschild – received a letter from then-foreign secretary Arthur James Balfour on November 2, 1917, to be forwarded to the Zionist Federation of Great Britain and Ireland.The letter, famously known as the Balfour Declaration, did much to pave the way for the establishment of a state for the Jewish people – the State of Israel.By yet another coincidence, Baron Edmond de Rothschild, known as the father of the Yishuv due to the millions of dollars he donated for the purchase of land and the establishment of Israel’s wine industry, died on November 2, 1934, exactly 17 years to the day after his relative Walter Rothschild received Lord Balfour’s letter.The Rothschilds continue to be involved with Israel’s needs. Sometimes it’s the British branch of the family, sometimes it’s the French – but they keep on giving. The Rothschilds also paid for the construction of the Supreme Court building.
• TAKING INTO account its recent construction spurt, the Museum of Tolerance may also open in 2017 – a decade after its scheduled target date – on the site of the old Arab cemetery between Agron and Hillel Streets.The ground-breaking ceremony in May, 2004 was attended by then-governor of California Arnold Schwartzenegger; Ehud Olmert, who was mayor of Jerusalem at that time; then-president Moshe Katsav; Silvan Shalom, who was foreign minister, Shaul Mofaz, who was defense minister; Tzahi Hanegbi, who was internal security minister; Natan Sharansky, who was Jewish affairs minister, and Rabbi Marvin Hier, dean and founder of the Simon Wiesenthal Center, which is the umbrella group of the museum.The target date for the completion of the museum was 2007, but a series of protests and court cases held up construction. Ultimately the project went ahead, its progress shielded by a high fence.However, one has to wonder just how many museums a poor city like Jerusalem needs when the funds involved could be diverted to more urgent needs such as shelters for the homeless and safety for all.
• COMING TO a new country can be a bewildering and even traumatic experience for any new immigrant – especially one who doesn’t speak the language. But English and French speakers coming to Jerusalem can find a willing ear and a helping hand via the Ginot Ha’Ir Community Council in Emek Refaim. The GHCC, in conjunction with the Jerusalem City Council, hosts a neighborhood Immigrant Absorption Office, at which all new immigrants are welcome. Office personnel help the new immigrants during their first few years in Israel and also introduce them to members of the local community. Immigrants in need of guidance and assistance can contact Eliezer Rosner at [email protected] ginothair.org.il or 054-665-0189.
Advertisement
Subscribe for our daily newsletter