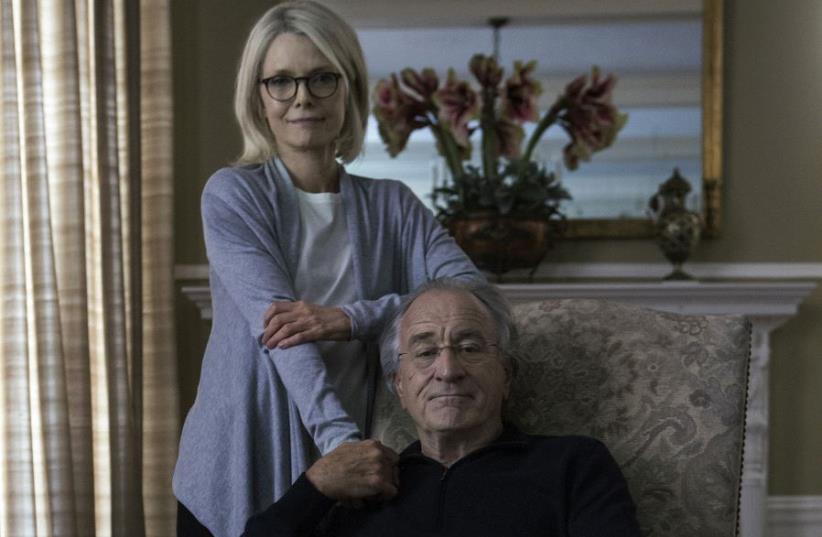 Robert Deniro and Michelle Pfeiffer in 'The Wizard of Lies.'
(photo credit: CRAIG BLANKENHORN/HBO)
Advertisement
It's been more than nine years since one of the biggest financial scandals in history rocked the United States. This week, HBO is taking a closer look at the human faces at the center of the Bernie Madoff scandal, in a new film: The Wizard of Lies.The film is based on the book of the same name by New York Times reporter Diana B. Henriques. It flits back and forth between scenes in the Madoff family's life pre and during the scandal, and interviews Henriques (who plays herself), conducted with Bernie in prison. It also uses real footage from news and late-night TV shows discussing the scandal, which rocked the nation and dominated headlines for weeks.Bernie is portrayed by the iconic Robert Deniro, who throws himself into the role admirably, but still looks and sounds like– well, Robert Deniro. His wife, Ruth, is played by Michelle Pfeiffer, and Hank Azaria stars as his accomplice Frank DiPascali.Director Barry Levinson has created a haunting, deeply depressing and starkly dismal film about the undeniably dark tale.The film focuses on the human toll of the scandal– in particular Bernie's wife, Ruth, and his sons, Andrew and Mark. It skims quickly over the details of the crime itself (it certainly isn't a film for financial buffs) to probe the psyches of Bernie and his family members.There will be few people out there who watch the film who don't remember the basic story line of the scandal. It certainly felt like the film was constantly building towards the heartrending climax everyone knew was coming: Mark hanging himself with a dog leash while his toddler slept in the next room. The film concentrates almost exclusively on the suffering of Bernie's immediate family, though it does mention in passing many of those who lost everything– including the others who committed suicide after the story broke.The overall tone is clearly sympathetic to the Madoff sons, despite the allegations and accusations of collusion that dogged them constantly (neither was ever charged with any crime). It's hard not to come away from the film pitying the family that was so utterly destroyed by Bernie's actions. Mark committed suicide in 2010 and Andrew died of cancer in 2014. Ruth reportedly lives in a one-bedroom apartment in Connecticut and has cut off all contact with her husband of 57 years, but has not divorced him.Pfeiffer said recently on The Tonight Show with Jimmy Fallon that she met with Ruth before portraying her for the film. "I said, you know, I was sort of surprised that you agreed to meet me," Pfeiffer said, retelling her meeting. "And she said, 'well, I'd be surprised if you were playing me and you didn't want to meet me.'"One thing that is decidedly downplayed in the film is any mention of Bernie's Jewish identity. While not observant, the Madoffs were active in the Jewish community and many of the victims of the fraud were Jewish communal organizations and nonprofits, including Hadassah, The Chais Family Foundation, the Jewish Federation of Greater Los Angeles and more. Bernie was also the chairman of the board of directors of Yeshiva University's business school, and treasurer of its Board of Trustees.But the film makes scant reference to this aspect of his life, though there are a few mentions of Holocaust survivor Elie Wiesel, who lost much of his life savings as well as a significant chunk of his foundation's endowment.Instead, we see Bernie eating lobster (likely true), decorating his home with Christmas lights (less likely) and being informed of his son's suicide by a priest (I could not verify the chaplaincy staff at Butner federal prison).In one scene, where Bernie is in a sleeping pill-induced hallucination, he imagines an angry mob descending upon him: "Have you no shame... preying on your own people, stealing from your own people, have you no shame!?" one man shouts.The film attempts to examine the psyche and motives of a man who swindled thousands without an ounce of remorse. It finds little, leaving the crime still unfathomable, and its mastermind inscrutable.It is certain, however, to dig up painful memories for many viewers.

The Wizard of Lies debuts Saturday on HBO in the United States. In Israel it becomes available on Yes VOD and HOT VOD on Sunday and will air next weekend.