Donizetti’s ’The Elixir of Love’ is performed at the Sultan’s Pool. 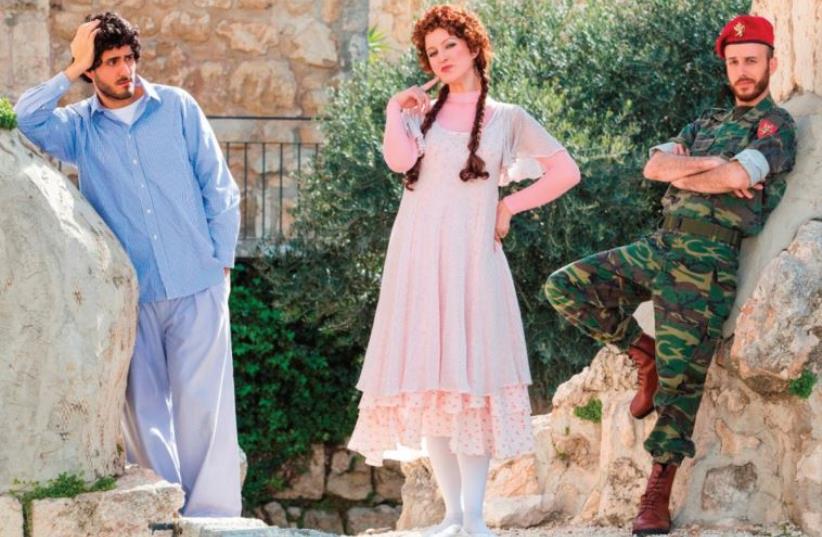 Donizetti’s ’The Elixir of Love’.
(photo credit: ROI KAFRI)
Advertisement
Gadi Shechter doesn’t exactly want us to get out our hoes, traipse down to the fields and possibly later break out in a rousing session of hora dancing, but he does feel we can all connect with a time when ideology still took precedence over technology.Shechter is the revival director of the upcoming performances of Donizetti’s comic opera L’elisir d’amore (The Elixir of Love), with shows lined up at Jerusalem’s Sultan’s Pool on June 24 and 25.The production is a revival version of Omri Nitzan’s creation first presented in 1997. The storyline of the opera, which was first performed in 1832 and was set in a village in Italy, has been deftly transposed to a kibbutz of the 1950s.Although the production has been around the block a couple of times, Shechter says he was keen to keep the product fresh, which involved certain esthetic tweaking.“We are taking the production we did indoors [at the Opera House in Tel Aviv] and giving it a twist or two. I don’t want to give too much away because I want the audience to be surprised. I can say that I wanted to incorporate as many elements as possible from the period in which the production is set. I want to recreate part of the atmosphere of Israel at the time,” he says.That involves some polychromatic tuning.“I want to play around with the black and white of the images of the past and go through a transition of the colors we’ll present. The end result is the very colorful and vibrant stage.Whenever you take an opera out of a building, you have to augment it with some new elements. The outdoor setting really begs for that,” he says Not only will the visual presentation be enhanced on stage, but there is, of course, quite a backdrop to the Sultan’s Pool, with the Old City walls and David’s Tower rising up behind.Shechter feels that Nitzan’s decision to opt for a kibbutz milieu is a natural fit for the Donizetti opera.“There was something still quite naïve about life on a kibbutz back in the 1950s, and you have pastoral innocence in the opera, too. Nemorino is in love with Adina. She doesn’t really know what she wants, she only thinks she knows better than everyone else and is the smartest person around. And you have the ideological Israel of that time, with soldiers, including a paratrooper, who are very patriotic. In the end, Adina realizes that the best thing she can have is right under her nose.The latter refers to her longtime admirer Nemorino, who is a simple peasant, while Adina is a bona fide member of high society. But, after her giving Nemorino something of a torrid time, true love eventually wins out,” he says.The neutral observer may note that Adina doesn’t really deserve to find true love, having played around with her young beau’s feelings in quite a merciless fashion. So, could one conclude that Donizetti was something of a misogynist and had no qualms about portraying the principal female character in somewhat less than a positive light? “I think that might be going a little too far,” responds Shechter. “I think that, simply, there are people that have to go through some process or other in order to achieve the result they want.”He notes that Adina certainly could not be accused of being a money grabber.“It is only after she gives herself to Nemorino that he comes into a fortune, after he gets an inheritance from a late uncle. She herself says, ‘Wow! I didn’t know.’ No one knew,” says the director.Shechter thinks that the heroine may have been the victim of her own intellectual pursuits.“She always has a book in her hands, and she may have made Nemorino go through all that anguish because she was running after some idealistic form of love that she’d read about in one of her books, a sort of love that she realizes doesn’t exist in real life. She had to go through some kind of process of discovery,” he says.Adina’s own learning curve also entailed a similar rite of passage endured by the soldier (the physically impressive Belcore) to whom Adina initially promises her heart.“He is full of himself and doesn’t care about anyone else,” says Shechter. ”Suddenly he finds himself in a situation whereby he has to work hard to win a woman over. She turns him down repeatedly; and when she finally agrees to be his wife, she runs away just before the wedding.”It seems that Donizetti wanted to leave his audiences enlightened but also entertained. Overall, the odd romantic blip notwithstanding, L’elisir d’amore is a delightful comic opera replete with enchanting arias and alluring characters and, naturally, it all ends happily ever after.A stunning natural setting right by the Old City, a fun storyline, a great cast – with Alla Vasilevitsky as Adina, Alexey Dolgov in the role of Nemorino, Riccardo Novaro as Belcore, Vladimir Braun as the everscheming Dulcamara and Anat Charney as Adina’s confidante Gianetta – and a pink Cadillac on the stage to boot, what more could any opera lover ask for?

‘The Elixir of Love’ will be performed on June 24 and 25 at 8 p.m. at the Sultan’s Pool in Jerusalem.For tickets and more information about the opera: www.bimot.co.il and *6226.