Imagination and empathy are not words that one often hears in rabbinic sermons. 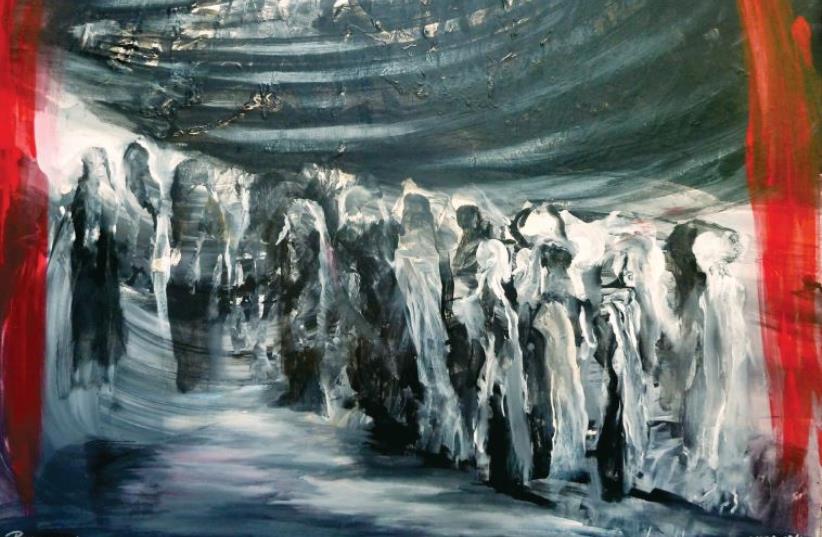 Painting by Yoram Raanan
(photo credit: YORAM RAANAN)
Advertisement
“The blood will a sign for you on the houses where you are, and I will see the blood and I will pass over you... And this day shall be for you a memorial, and you shall celebrate it as a festival... ” (Exodus 12:13,14)

Last year, during a visit to Israel, I sat in on a series of lectures that were designed to prepare the audience for the upcoming Passover holiday. The speaker, a brilliant young rabbi, focused on the Seder night, particularly on the text of the Haggada. He spent most of his opening lecture elaborating on what he considered the most difficult task with which we are all confronted on the first night of Passover. The task is described in the following famous passage: “In each and every generation, a person must see himself as if he personally left Egypt. As it is written, ‘And you shall explain to your son on that day that it is because of what the Lord did for me when I went free from Egypt’ (Exodus 13:8).” The requirement is explicit in the biblical text: the Lord did it for me, when I went free from Egypt.The young rabbi candidly confessed to his audience that he had never been able to fulfill this requirement.Indeed, he didn’t think it was possible, certainly not for most of us, to envision ourselves as if we personally had experienced slavery and redemption. “This,” he insisted, “is the most difficult task we are faced with on the Seder night.”When I first heard this assertion, I found it to be quite provocative. I wanted to protest but maintained my silence in respect for the young rabbi. I attributed his conviction to his relative immaturity. I have never found this obligation difficult. Personally, I have found it quite easy to imagine myself as a slave and to personally exult in the emotional experiences of redemption and freedom.Later, I could not rid my mind of the young rabbi’s statement. I began to question my own inner certainty.Had it really been so easy for me all these years to envision myself as one of those who had experienced both slavery and the Exodus? In the midst of my extended preoccupation with the young rabbi’s assertion, a long-forgotten memory suddenly surfaced in my mind. I was taken back in time to another lecture I had heard just before Passover many years ago. This time, the speaker was not a young rabbi at all. Rather, he was an old and revered hassidic rebbe, a survivor of the Holocaust who had spent years in Auschwitz and had witnessed the vicious murder of his wife and children with his own eyes.That old rebbe was Rabbi Yekutiel Yehuda Halberstam, who was known as the Klausenberger rebbe, after the small town in the Balkans where he had served prior to World War II.In that lecture, Halberstam recounted his own puzzlement over a lecture he had heard very long ago from one of his mentors, careful to identify him in detail because of the strange and almost unbelievable experience that he reported.The mentor said that he had no difficulty at all imagining himself to have been in slavery in Egypt and to have been redeemed. In fact, this mentor reported that he could clearly remember the experience. He could recall in great detail the burdensome work he had to perform, the dirty hovel in which he was forced to live, and the sighs and groans of his companions. He could even still see, in his mind’s eye, the cruel face of his tormentors as they sadistically whipped him for not producing his daily quota of bricks.The Klausenberger rebbe confessed that when he first heard his mentor make those claims, he had difficulty believing them. He thought that his mentor had made such a claim just for the effect it would have on his listeners. He stressed that sometimes it is justified for a speaker to resort to hyperbole to make his point more dramatic and more graphic.But then the rebbe continued to say that after many years, he had come to realize that his mentor was telling the absolute truth. “It took the experiences I had during the horrible years of the Holocaust,” he explained, “for me to realize why my mentor was able to recall his experiences in ancient Egypt’s tyranny.”The rebbe went on to elaborate on two psychological processes that are necessary to invoke during the Seder night as we recite the Haggada. He used two Hebrew and Yiddish terms respectively: koah hadimyon (the power of imagination) and mitleid (empathy).The lesson was that we are often restricted by our own tendencies to rely on our reason, rationality and intellectuality. We underplay the powers that we have to fantasize, to imagine, to dream freely. In a sense, we are slaves to reason and need to learn to allow ourselves to go beyond reason and to give our imaginations free rein. Only then can we “see ourselves as if we had personally endured slavery.” Only by cultivating our imagery can we ourselves experience the emotions of freedom and liberty.Imagination and empathy are not words that one often hears in rabbinic sermons, but they are the words that the Klausenberger rebbe used that evening. And, as he concluded in his remarks, he learned about those words through the bitter suffering that he endured when he was enslaved in Auschwitz, and he appreciated redemption when he himself was finally freed from his personal bondage.The young rabbi who started my thinking about this had, through his good fortune, never really experienced anything remotely resembling slavery. Naturally, he was thus deprived of the ability to really appreciate freedom.After a few days, I approached the young rabbi and shared with him the words that I had heard decades ago, before this young rabbi was even born. I told him what the Klausenberger rebbe had said about empathy and imagination. The young rabbi responded politely and with gratitude, but with a gentle smile got in the last word: “But the Klausenberger rebbe didn’t say that learning to imagine and to empathize were easy.” Hag sameah! A happy holiday! The writer, a rabbi and doctor of psychotherapy, is the executive vice president emeritus of the Orthodox Union.