Nazi the dog violently attacked his 60-year-old owner after seeing her feed a stray dog. The fact that a dog was named Nazi, though, was nothing unusual here.

A woman in Thailand was viciously mauled by her pitbull named "Nazi" on Sunday, according to Thai reports and the UK's Daily Star newspaper.

The dog in question was raised by his now 60-year-old owner since he was a puppy and was currently at the age of six.

However, Nazi was, evidently, a rather jealous dog, and reacted harshly upon seeing his owner feeding a stray dog.

The resulting grisly scene was found by emergency services, with the woman covered in serious wounds. She was taken to the hospital and her condition is unknown at this time.

As for Nazi the pitbull, the woman's husband was able to trap the dog back inside the house. However, according to Thai media reports, he is still violent and removing him from his owner's body was a struggle. 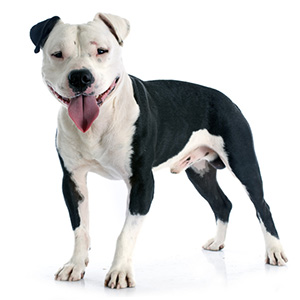 According to the Daily Star, the victim's husband had to pry Nazi away with an iron rod.

The ultimate fate of Nazi the pitbull is unknown at this time.

Why was a dog named Nazi?

Pitbulls are not usually dangerous dogs and are beloved by many around the world. However, they can still be dangerous given the right circumstances and many people are afraid of them.

But one thing is certain about this case: The fact that a dog was named Nazi wasn't seen as anything too unusual.

As noted by the Daily Star, Nazi culture, imagery and history are surprisingly popular in Thailand, specifically citing the Nazi-themed restaurant Hitler Fired Chicken that opened in Bangkok in 2013. In addition, a hotel in Bangkok features a room dedicated entirely to Nazi leader Adolf Hitler. The country has also in the past held "Nazi-themed celebrations."