The assailant in London's most recent stabbing survived, and unlike many Palestinian knife attackers in the “stabbing intifada,” he was not shot. 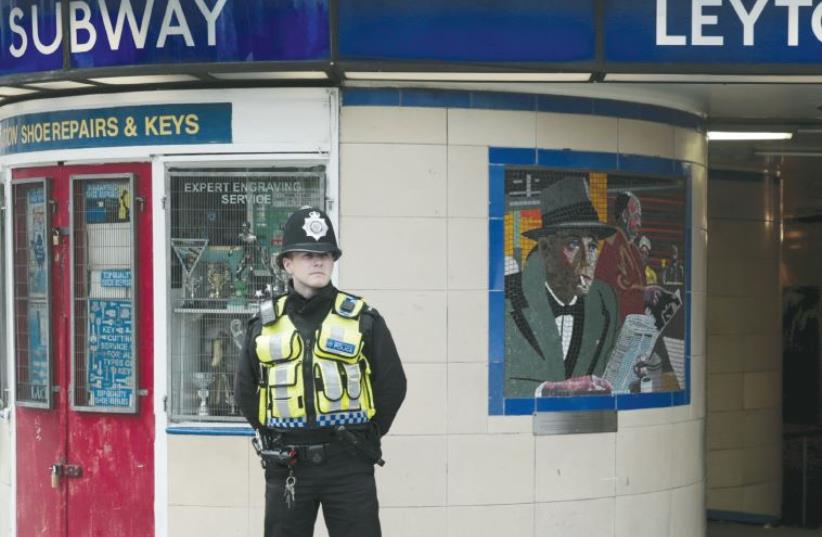 A police officer patrols outside Leytonstone Underground station in east London
(photo credit: REUTERS)
Advertisement
The location was far from home but the story seemed familiar – a crazed attacker armed with a large knife, beating and slashing a random victim at an Underground station, before being subdued by police.In the case of the Leytonstone station attack in London on Saturday evening, a man said to be an Islamist reportedly shouted “this is for Syria,” and then beat and slashed a man, before police arrived minutes later, tasered him and took him into custody. Reports since have speculated that he was attempting to behead the victim before he was apprehended.The assailant survived, and unlike many Palestinian knife attackers in the “stabbing intifada,” he was not shot.That was enough for many observers online to all but hint that the incident had proven a universal lesson and shown a standard for response that Israel has sorely failed to uphold in its handling of daily knife attackers the past two months.One observer, Reuters Jerusalem bureau chief Luke Baker, tweeted “attacker was tasered and detained by police. That probably wouldn’t have happened in #Israel.” Others wrote similar posts on social media, the general theme being “see IDF and Israel Police – this is how you do it.”Responses such as this don’t take into account the dozens of incidents in which perpetrators were taken alive or not wounded at all, even in cases like the Panorama building attack in southern Tel Aviv last month, when a Palestinian man from Dura stabbed two men to death during a prayer service before he was subdued by civilians, no worse for wear. Along the way there have also been a number of incidents where the use of deadly force was questionable, perhaps even illegal. The bottom line is there is no universal script to how these incidents play out.It is preferable to take a suspect into custody alive, not only for the purposes of investigation, but also to prevent a further loss of life. Nonetheless, the past two months have been by any measure uncharted territory for Israel, presenting security challenges that arguably have no precedent. One looking for a single, convenient example or anecdote to prove their notions about what should be done, dismiss how very complicated the situation has been here recently.The responses to Leytonstone in a sense mirrored those made by some Israelis following an incident on November 4 when 18-year-old Faisal Mohammad stabbed and wounded four students at the campus of the University of California in Merced before he was shot dead by campus police. The general theme in those comments was one of annoyance about perceived double standards, and the lack of outrage about “excessive force” used by campus police.In both of these occurrences, the commenters appear to be seizing upon unique and very different cases to prove a preconceived notion. In the case of Leytonstone, critics claim that the British response is applicable across the board in Israel, where security personnel and armed civilians are trigger happy if not outright homicidal. In UC Merced, it shows that knife attackers in Israel are treated the same if not better than they would be elsewhere, the only difference is no one would chastise the shooters like they do Israeli police and security guards.Neither of these arguments appear to fully grasp the fact that each and every one of these incidents is an independent event and very fluid and dynamic.Observers in Israel who see every attacker as a lethal terrorist who must be neutralized with deadly force, even a teenage girl with scissors, are in that case not much different from those who say Tasers, nonlethal means and shooting for the legs are always preferred options, even though in many cases deadly force was absolutely justified and necessary in protecting the lives of attackers and civilians.By applying some universal lesson, the Leytonstone observers also don’t seem to be taking into effect the particulars of the incident itself or how it could have played out differently. In one video posted of the arrest, the first time he is tasered it does not work. He steps back for only a moment and then continues to charge the police before a few seconds later a second stops him.The gap between those two shots was more than enough time for an attacker with a knife to close in on a victim and kill, showing that nonlethal means can often prove fatal for those using them for self-defense.The universal lesson, to some degree, doesn’t take into account the divergent situations on Israel’s streets as opposed to those of the UK. Other than the May 2013 murder of Lee Rigby – where two Islamists murdered a British soldier in broad daylight, dragging the body to the street waiting for the police, who came initially unarmed, and attacked the officers before reinforcements came to wound and apprehend the terrorists – there hasn’t been another incident like this in the UK in the past two-anda- half years. If there were, say, five more knife attacks at random locations on random commuters, all on consecutive days, would the responses become more lethal? What about after two weeks? A month? Two months? Expected standards about the use of force would still apply, but one thinks that perhaps if these attacks became a daily occurrence in the UK, the police would start favoring pistols over Tasers.Assuming the stabbing intifada tapers off in the near future, we will have an opportunity to examine how it played out and the myriad ways in which first responders could have better handled active attacker situations. ■

The writer covers crime, African migrants and security issues for The Jerusalem Post. His blog can be found at www.benjaminhartman.com.