One of the typical features of the New Middle East is that alliances are not based solely along religious or ethnic lines. 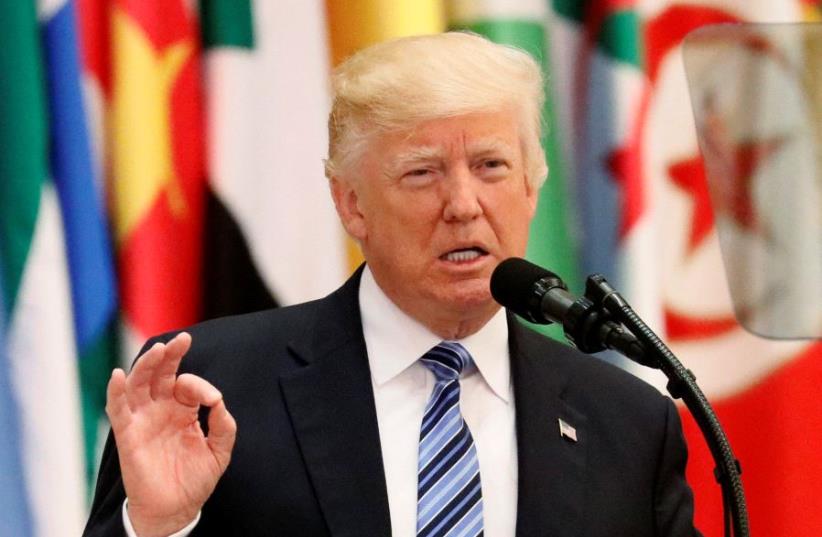 US President Donald Trump delivers a speech during Arab-Islamic-American Summit in Riyadh, Saudi Arabia May 21, 2017.
(photo credit: REUTERS)
Advertisement
Over the past year we have witnessed the molding of a new Middle East, in which Israel plays a significant role. The term “New Middle East” was coined by Shimon Peres who, after the Oslo Accords were signed with the Palestinians in the 1990s, envisioned a new era in which Israel would be integrated in the Middle East in the political and economic fields.Although the Arab world rejected this term as an Israeli attempt to achieve dominance in the region through non-military means, Israeli diplomacy made progress toward this end by scoring substantial achievements in the region.Today, however, it is not Israel’s contribution that has prompted the formation of the current New Middle East. It is a product of a number of developments, including the American occupation of Iraq in 2003, the rise of Iran as a regional power seeking hegemony and nuclear power, and the wave of the Arab Spring revolutions that triggered chaos in several major (Egypt, Syria) and minor (Libya, Yemen, Tunisia, Bahrain) countries.The shattering of the Arab world has forced some of its elements to seek external allies to battle threats from within and without. Together, these developments forged a new architecture of alliances and coalitions based on shared interests.One of the typical features of the New Middle East is that alliances are not based solely along religious or ethnic lines. For example, several Sunni states, such as Jordan, Saudi Arabia and Egypt are concerned by the expansion of Iran and Shi’ite Islam, and its allies, while the Sunni states of Qatar and Turkey maintain good relations with Iran. Furthermore, the Sunni Arab World is not only joining forces against Qatar, because of the latter’s support of the Muslim Brotherhood and its pro-Iranian policy, but also against a range of different Sunni organizations that are considered terrorist groups, such as al-Qaeda, Islamic State, the Muslim Brotherhood, and more.Another indication of the divisions among Sunnis is the split among the Palestinians, who are divided not only geographically but also ideologically and politically between the Palestinian Authority in the West Bank and Hamas in Gaza. If this were not enough, the Iraqi Kurds (who are Sunni Muslims but not Arabs) announced a referendum on their independence, exerting pressure on the federal government in Baghdad and on neighboring Turkey, which has a large Kurdish minority.The conflict between Sunni and Shi’ite Islam and the conflicts among the Sunnis themselves are one of the reasons that major players in the Arab world are reaching out to countries outside the Arab system. Since the pragmatic Sunni Arab countries adopt a Western-oriented policy and their armies rely on Western technology, approaching Russia is not considered a real option.However, the West in general – the US and Europe – and limit its role. Furthermore, external allies are needed to replace Iran and Turkey, which served as local allies on the margins on the Arab system and today have either become an enemy (in the case of Iran) or hesitate to cooperate (Turkey).Thus, Israel has suddenly found itself by default courted by major countries in the Sunni Arab world. This development offers Israel several achievements: first, recognition as an important player in the Middle Eastern arena. Second, if cooperation in the past focused on the minorities (such as Druse, Kurds, Maronites, etc.) and periphery (Turkey, Iran), now Israel has penetrated the core Sunni Arab world. Third, while Israeli-Arab cooperation occurs mainly behind the scenes, some elements are currently rising to the surface. The new public visibility of cooperation between Israel and Saudi Arabia and the Gulf States is intentionally designed to intimidate their common enemy, Iran.If cooperation with Israel remained secret, Israel would not be able to be used as a deterrent card. For the PA or rather for PA President Mahmoud Abbas, public cooperation with Israel against Hamas is dangerous, although the new political configuration that firmly places Hamas alongside Qatar and Iran on the side of the “bad guys” seems to have mitigated Abbas’ concerns of public indications of collaboration with Israel.Although today’s New Middle East poses greater security threats than the former New Middle East, it is more amenable for Israel, because the Arab countries do not feel that they are being coerced into cooperation with Israel. Rather, this new constellation represents a conscious decision based on a realistic analysis of interests, and the longstanding logic “my enemy’s enemy is my friend” – a motto that has served Israel well over the years.Israeli decision-makers identified the emergence of this unique regional opportunity relatively late, although having discovered it, they pounced upon it like a treasure chest. It is, however, too early to celebrate: cooperation between Israel and the Arab states remained limited by an undeniable “glass ceiling” whose height and thickness may be difficult to determine but its central component is clearly the Palestinian issue.In the 1990s, Israel was permitted to penetrate the Arab world and establish diplomatic and economic ties with countries in the Middle East and North Africa in line with progress on the Palestinian issue, but these ties dissipated with the collapse of the Oslo process and the outbreak of the second intifada in 2000. The lesson of this period is that a significant breakthrough between Israelis and Palestinian can remove barriers and dramatically increase Israel’s regional integration.Most Sunni Arab states have abandoned ideology in favor of political realism. It is time for the Israeli government to do so too, and make progress toward Israeli-Palestinian peace.The author teaches at the Department of Islamic and Middle Eastern Studies at the Hebrew University of Jerusalem and is a board member at Mitvim – the Israeli Institute for Regional Foreign Policies.