The appointment of a new secretary-general and next month’s General Assembly meeting present an opportunity for a reevaluation of the UN’s treatment of Israel. 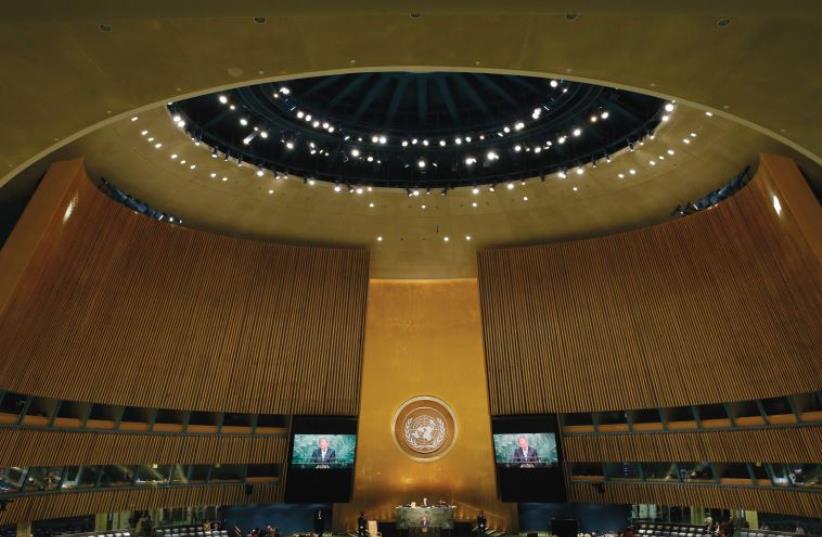 THE UNITED Nations General Assembly.
(photo credit: REUTERS)
Advertisement
The UN’s predisposition against Israel is well documented. A low point was undoubtedly a 1975 resolution pushed by the Soviet Union that equated Zionism with racism.The demise of the Soviet Union did not improve matters. Arab countries and other third world nations have consistently voted en bloc against the Jewish state.For decades Israel has been the only member state consistently denied admission to a regional group, which is the organizational structure by which member states can participate in UN bodies and committees. Arab states refuse to allow Israeli membership in the Asian Regional Group, Israel’s natural geopolitical grouping. Though eventually accepted to the Western and Others Group in May 2000, Israel’s membership is limited and does not allow it to participate in the UN’s Geneva-based activities.Israel is the only country in the world that is singled out to appear on the UN Human Rights Council’s permanent agenda. Countries that regularly commit horrific human rights abuses such as Sudan and Iran are mentioned by the HRC – if at all – as part of the general debate. Not only does the number of resolutions brought against Israel by the HRC outstrip resolutions brought against any single country, it exceeds the number brought against all other countries in the world – by a long shot. In 2015, for instance, the HRC brought 20 resolutions on purported human rights abuses against Israel and just three against all other countries – one against Iran, one against Syria and one against North Korea.“Special rapporteurs” on “the situation of human rights in the Palestinian territories occupied since 1967” have outdone one another in their biased conduct. In 2008, John Dugard justified Palestinian terrorism as an “inevitable consequence” of Israel’s actions. Richard Falk compared Israel’s treatment of the Palestinians to Nazi actions during the Holocaust.Justice Richard Goldstone, on behalf of the UN in 2009, leveled the claim that Israel intentionally targeted civilians, before he retracted it in an op-ed in 2011.Secretary-General Ban Ki-moon admitted to the UN’s bias during his visit to Israel in August 2013.“Unfortunately, because of the [Israeli-Palestinian] conflict, Israel’s been weighed down by criticism and suffered from bias – and sometimes even discrimination,” Ban said in response to a question about discrimination against Israel at the UN. “It’s an unfortunate situation,” he said, adding that Israel should be treated in the same way as all the other 192 member states.The time has come for a restart. Ban ends his second term as secretary-general on December 31. Custom dictates that the job rotates between regions and it is now the turn of Eastern Europe. Two Bulgarian women are the front-runners for the position and they have an opportunity, where Ban has failed, to take steps to end the UN’s anti-Israel bias.There have been a few positive developments in recent years. In 2009 the UN adopted an Israel-initiated resolution that deals with agricultural technology for development. And in January 2015 the General Assembly held its first-ever special session on the rise of anti-Semitic violence worldwide.Signs of normalization of relations between the UN and Israel can be discerned from the increasing amount of goods and services UN institutions purchase from Israel. In 2015, the UN purchased $91.8 million in goods and services from Israel, double the amount two years earlier.A large proportion of the goods were medical, and IT and communications equipment, which seemed to point to the attractiveness of Israel’s advanced technologies.The UN has a long history of bias against Israel, but change is possible. Once upon a time the UN was very different. It is thanks to General Assembly Resolution 181 on the partition of Palestine that the State of Israel came into being.The appointment of a new secretary-general and next month’s General Assembly meeting present an opportunity for a reevaluation of the UN’s treatment of Israel.The next secretary-general should take steps to integrate Israel into the UN’s institutions; end the prejudiced approach of the Human Rights Council toward Israel’s purported human rights abuses; and take further steps to normalize relations between the UN and Israel. If he or she is successful, the UN of the 21st century will more closely resemble the UN that brought the State of Israel into existence nearly 70 years ago.