The IDF began treating wounded Syrians in 2013, meeting them as they cross the border, treating their most serious and immediate medical needs, and then transporting them to hospitals inside Israel. 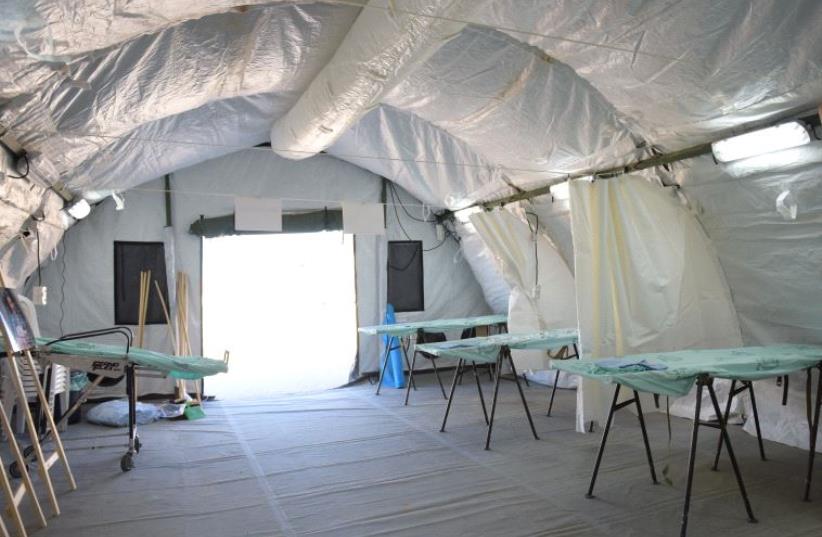 Israeli field hospital.
(photo credit: IDF SPOKESMAN’S UNIT)
Advertisement
The recent confrontation between Israeli and the Iranian- backed forces in Syria that led to the downing by Syria of an Israeli warplane marked a major escalation in the conflict between Israel and forces along Israel’s border. For seven years, Israel has claimed to strategically refrain from involvement in the bloody Syrian civil war, and made clear even after the F-16 fighter jet crashed that Israel is not seeking a wider conflict.But one must remember that Israel is, in fact, very much involved.Since 2013, the IDF has facilitated the treatment of more than 3,000 wounded Syrians in Israeli hospitals, at no charge. Hospital personnel have long claimed they do not know who they are treating – civilians, members of the Free Syrian Army or al-Qaida/ Iranian-backed fighters out for Israel’s destruction.Is treating wounded Syrians a humanitarian gesture or a strategic policy for Israel? I would argue whether intentional or not, treating wounded Syrians is a strategic mitzvah.Syria has never recognized the State of Israel. Diplomatic relations between the two countries have never existed.Syrian maps don’t even acknowledge the Jewish state; instead they show only Palestine. And Syrian youth are taught to hate Israel in their schools and mosques from a very young age.Yet, severely wounded Syrians, casualties of their long and devastating civil war, come to Israel secretly for free medical treatment, which is consistently given. Some of these Syrians will surely remember the treatment they received and share that message back home.The refrain of the treated: “There’s nobody to help us but God and Israel.”The IDF began treating wounded Syrians in 2013, meeting them as they cross the border, treating their most serious and immediate medical needs, and then transporting them to hospitals inside Israel. They come with fractures, shrapnel wounds, shattered limbs and disfiguring facial injuries.The IDF treats any Syrian who needs it, no questions asked. A recent report by Agence France-Presse (AFP) that evaluated Syrian patients in Israel found that the majority are likely rebels fighting President Bashar Assad’s regime, and there are also civilians, about two thirds of whom are children “They know that there are specific places which they can reach and where we wait for them,” Tomer Kolar, the IDF’s chief medical officer for the Golan sector, told AFP.Doctors see heartbreaking wounds.Young men whose faces were destroyed by sniper bullets, leg wounds so bad they require amputation – the result of bombs exploding in Syrian fields.Israeli hospitals spare no effort to heal these patients.After treatment, the Syrians are taken back to the border, so they can return to their homes. They are given supplies and medications, all with no clues that would identify any of the goods as Israeli. The patients cannot disclose where they have been, since that would mean reprisals and death. But Israel knows that most of the Syrians who have received care are grateful and acknowledge that their experience has changed the way they view Israelis.In the short term, Israel’s efforts may have little impact. Just recently, in 2017, the UN – among its other multiple resolutions against Israel – condemned the country’s “illegal occupation” of the “Syrian Golan,” completely ignoring Israel’s free medical aid to the Syrians, the Syrian civil war, Syria’s shelling of Israeli communities, its support for terrorism and calls for Israel’s annihilation.Not even such a resolution, nor the downing of Israel’s F-16 fighter jet – a move that wounded two soldiers and destroyed a nearly $20 million piece of hardware – is likely to stop Israeli doctors or the IDF from treating wounded patients.IDF humanitarian efforts are never intended to care for or change entire populations, which would be impossible anyway. The IDF cares for people – one person at a time. As the Talmud teaches, “Whoever saves a life, it is considered as if he saved an entire world.”The author practices law in Boston, MA, concentrating on criminal defense, mediation, and general trial practice in the state and federal courts. She is a member of the board of directors of American Friends of LIBI, which helps fund the IDF.