Muslims are a minority in the West, and no one likes to point out that a minority can be as hateful and racist as a majority. 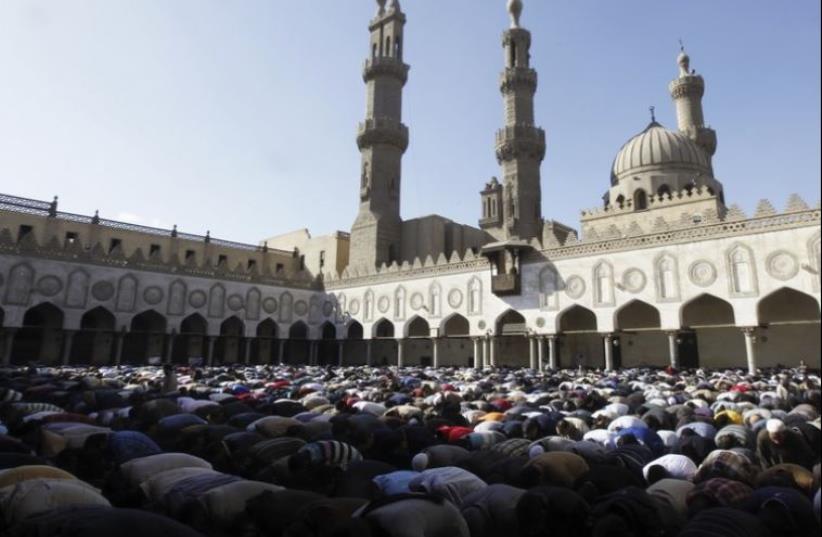 Egyptians attend Friday prayers at Al Azhar mosque in Cairo
(photo credit: REUTERS)
Advertisement
Anti-Semitism today is a Muslim problem. This is not to say that are no non-Muslim anti-Semites, or that all Muslims are anti-Semites, but there is little question that anti-Semitism, particularly anti-Semitism at its most violent, is disturbingly pervasive and legitimate in Muslim culture today. And it is only Muslims who can fight it effectively.The problem is particularly apparent in Europe, where anti-Semitic violence has become so common that soldiers have been deployed at Jewish sites across the continent and aliya from countries like France is skyrocketing despite Israel’s unstable security situation.The laundry list of atrocities is well known: the murder of French Jew Ilan Halimi; the slaughter of three Jewish children and a rabbi at a Jewish school in Toulouse; the mob attacks on the la Roquette synagogue and the Jewish neighborhood of Sarcelles in Paris; the Jewish Museum of Belgium shooting; the Hyper Cacher massacre; and numerous smaller incidents that are now so routine that they hardly merit a mention in the popular press.But thus far, few have pointed out the fact that all of the notorious atrocities mentioned above were committed by Muslims.Nor has Muslim anti-Semitism been limited to actual acts of violence. Softer forms of anti-Semitism have become ubiquitous in recent years. The brother of Muhammad Merah, who committed the Toulouse massacre, spoke of this culture of hatred after Merah’s atrocity: “My mother always said: ‘We, the Arabs, we were born to hate Jews.’ This speech, I heard it all throughout my childhood.”Equally telling was the video of Tzvika Klein, who walked through Paris in Jewish religious garb following the Hyper Cacher massacre. The ferocious abuse he faced took place almost exclusively in Muslim neighborhoods.This included a young child asking its mother, “Doesn’t he know he’ll be killed?” During last summer’s Gaza war, anti-Israel rallies were beset by the basest anti-Semitic incitement. In cities like Antwerp, Frankfurt and Berlin there were cries to “slaughter the Jews!” and “Hamas, Hamas, Jews to the gas!” Anti-Semitic incitement by Muslim religious leaders and activists has been all but normalized in both the West and the Muslim world itself.Indeed, the epicenter of this culture of anti-Semitism is the Muslim world. In the Middle East in particular, anti-Semitism of the most vulgar kind enjoys a legitimacy it would never be granted in the West. Anti-Semitic cartoons, television series and debased fantasies – including the blood libel – are so ubiquitous as to merit little comment. The Protocols of the Elders of Zion is openly sold and widely read. Religious and political leaders regularly invoke the basest anti-Semitic stereotypes.Countries like Iran openly engage in genocidal anti-Semitic rhetoric.The consequences are clear. There are approximately 1.6 billion Muslims in the world today. Given the pervasiveness of this culture of hatred, it seems likely that a large number of them harbor anti-Semitic attitudes to at least some degree. This means that there are more, must be more, anti-Semites in the world today than at any time since World War II. Many of them hold positions of religious and political power. Many more consider anti-Semitic violence legitimate and even praiseworthy. Still more subscribe to petty anti-Semitic stereotypes. I experienced this myself, when a Muslim woman I thought was my friend told me that the Jews “run everything.” While not physically threatening, these attitudes lead many Muslims to ignore or engage in apologetics for their more fanatical co-religionists.This has also had grave consequences for the non-Muslim world. Because Muslims are often seen as an oppressed class in the West, their anti-Semitism is at best indulged and at worst adopted by non-Muslims.This is particularly the case on the political extremes.In effect, the anti-Semitism of those considered the wretched of the earth has re-legitimized anti-Semitism on the part of those who view themselves as a privileged class. Muslim anti-Semitism, combined with the West’s latent anti-Semitism, has given birth to what many have called the New Anti-Semitism: an anti-Semitism that is equal parts hatred of Israel and its Jewish supporters, a vulgar and genocidal ideology, an encyclopedia of petty stereotypes, and the delusions of those who believe they are standing up for the oppressed and downtrodden by hating the Jews.All of this is uncomfortable to discuss. Muslims are a minority in the West, and no one likes to point out that a minority can be as hateful and racist as a majority. But it is imperative to face the truth, because anti-Semitism today simply cannot be fought without admitting that, currently, it is primarily a Muslim problem.This is particularly true because opposition to the New Anti-Semitism must come from the Muslim world itself. As in any religious group, there are a great many Muslims of goodwill. They reject anti-Semitism as they reject all forms of ideological hatred. And it is they who can be most effective in fighting it. The Jews can only defend themselves. It is Muslims who can truly change things. But before this can happen, both Muslims and non-Muslims must end their culture of denial. They must admit that the monster exists and must be defeated.If it is not, it may devour us all.

The author is the associate editor of Tower Magazine. His books are available at Amazon.com.
Advertisement
Subscribe for our daily newsletter