The checklist of fascists characteristic in individual people - opinion

The list is intended to be used as a way to help us evaluate degrees of fascist or totalitarian control in the ideas and actions of selected leaders, groups and institutions. 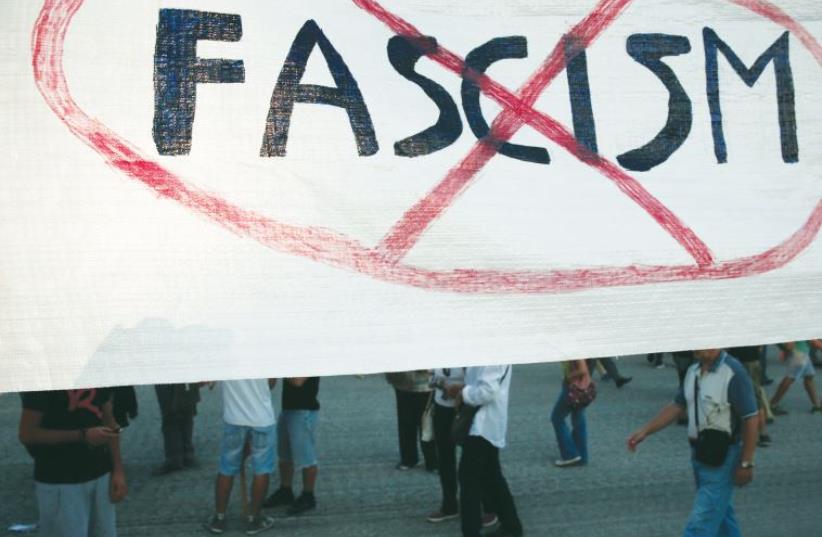 NOT APPLICABLE to Israel. Protesters take part in an anti-fascist rally in Athens in 2013.
(photo credit: REUTERS)
Advertisement

I propose the following working definition: Fascism refers to totalitarian or punitive control over human beings’ basic rights to live freely for themselves and responsibly towards others and their rights to free lives.

The questions we pose are: Is the USA heading toward fascism? Is Israel developing a fascist government?

A good many people in both countries are asking these questions these days with a good deal of emotional and what I will also call moral pain. Needless to say, many Israeli-Americans are struggling with both questions. I have personally heard from no small number of people that consciously or pre-consciously they are on the verge of giving up their basic faith in life and people in response to how badly our world has deteriorated recently.

But fascism can be and is a lot of fun at first. There is much that is thrilling about it. It frequently comes with a sparklingly attractive leader who projects a great deal of charisma. It is often heralded by very attractive aesthetics: a smart winning emblem, intriguing new body language gestures for greetings, moving and inspiring music, a strong comforting sense of group strength and solidarity, charming slogans and in many cases, aesthetic clothing markers or even full-scale uniforms. It’s a party and full of promises of good things: prosperity for most people, greater security against one’s enemies and a kind of electric atmosphere.

The happy party above naturally includes the enthusiasm of a promise to break down and clear out the influence and hateful presence of one or more undesirable groups or people. These can include members of certain religions, ethnicities, representatives of undesirable political viewpoints and people with different ideas about whatever. Them, their presence and their influence will be severely reduced if not entirely eliminated.

A MOB of supporters of then-US president Donald Trump climb through a window they broke, as they storm the United States Capitol Building in Washington, on January 6, 2021 (credit: LEAH MILLIS/REUTERS)

Finally, might make right and a lot of exciting power will yet be employed to achieve one’s goals, although note that not all of these goals will be presented explicitly upfront upon the initial formulation of the party. The fascist promise of a kingdom will generally turn into a roaring hell in stages, thus freedom to think differently is more and more limited, even in seemingly proper academic, scientific and political organizations where a variety of ideas and influences are soon censored, outlawed and punished.

Furthermore, respect, equality, empathy, compassion and other kindnesses are soon viewed as traitorous and collaboration with enemies. A rigid agenda of ideas and goals develop with increasingly tough-minded and then also violent repercussions and retaliations against non-believers.

The statistics of oppression, humiliation, discrimination, dehumanization, outright prejudice, persecution and so on mount up to include outright murder and even the holocaust.

Fascism is a path to enormous suffering and evil.

Just as in medicine and many other problems, it is often essential to catch a pathological or destructive process early enough in order to have a better chance of intervening successfully and stopping the unfolding damage, so it is with the emergence of fascist leaders and movements in order to stop them from grabbing a lock hold on society.

Not by chance have many people begun to be deeply concerned with the emergence of fascist ideas, procedures and institutions in a variety of today’s world governments.

The following “Checklist of Fascist Characteristics in Individual People and in Collective Behaviors” is intended as a tool to help us evaluate the emergence of fascist leaders and institutions in our lifetimes. The tool is intended to help us evaluate degrees of fascist or totalitarian control in the ideas and actions of selected leaders, groups and institutions in our societies.

Note that responsibility for making judgments is purposely vested in each of the readers. The author is not providing his own right and wrong answers. The fascism meter is a tool proposed for the free and independent use of all of us trying to figure out what we feel is happening in the societies in which we live.

In the following worksheet, the reader is first asked to judge whether each of the selected subjects of how we are living our lives involves a significant potential for subjecting us to fascist controls; and second, the reader is asked to judge whether a given way of behaving in this area of functioning as practiced or proposed by a given leader or group will constitute fascist control of us.

There are many typical behaviors that are frequent characteristics of totalitarian control over human beings (what we are calling fascism).

First, check each of the behaviors listed and note whether you agree or disagree that these are characteristic fascist behaviors:

3. Magical thinking, part-whole thinking, and an aura of extraordinariness and even divinity

4. Obsession with national and/or ideological dominance

6. Identifying and targeting specific enemies with a vengeance

7. Prejudice, dehumanization, persecution of non-believers (see antisemitism and all other targets)

8. Threats of revenge and retaliation against dissidents, dropouts, non-conformists

9. Holders of different opinions are frequently defined as enemies and subject to persecution and violence

10. Language of assault and violence, disrespect for non-violent problem solving and pluralism

11. Disdain and rage at disagreement and competition

12. Positions that are frequently in violation of basic law, especially human rights laws

13. Approval, stimulation, invitation and initiation of violence (including verbal assault, physical assault, intentional injury, assassination and martyrdom as a weapon)

14. Denials of harm to others

17. Recruitment of financial support without consideration of sources and without boundaries on influence

19. Efforts to turn a legal system into an instrument of power for one’s ideology

20. Diversion of monies solicited for a cause to personal gratification (see palatial homes, yachts, boats, planes, and ownership of valuable lands and properties)

Second, choose specific target subjects, such as the following individuals and collectives, and note whether you can identify prominent fascist behaviors or are developing the potential for fascism:

That’s it. There before you are your opinions. Each person expresses their own judgment. No one – no person, leader or group – has directed you how and what to think. This, too, is a vital aspect of democracy and not of fascism.

The writer is an American-Israeli clinical psychologist, a genocide scholar, and the director of the Institute on the Holocaust and Genocide in Jerusalem. He edited the Encyclopedia of Genocide and authored Fascism and Democracy in the Human Mind. Both books were awarded Outstanding Academic Book of the Year by the American Library Association.