This is not the first time the BBC and other news outlets have used grotesquely inappropriate headlines. 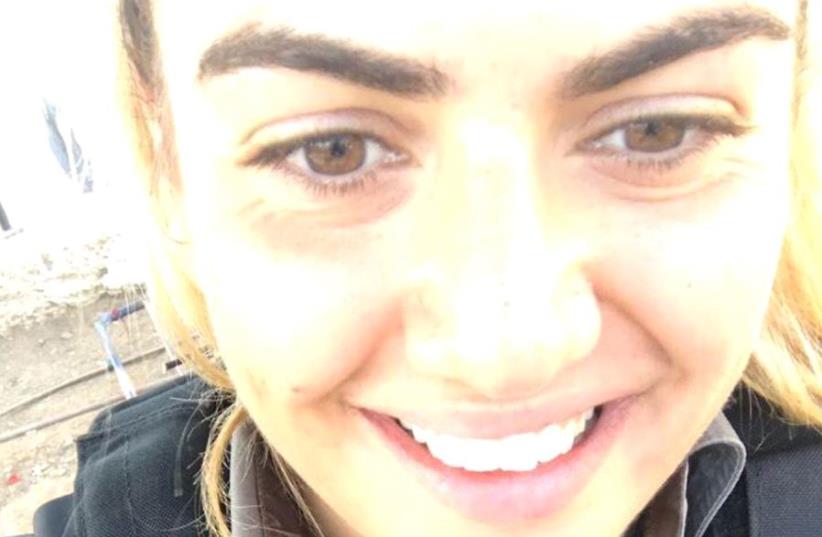 The selfie Staff Sergeant Major Hadas Malka took moments before she was killed.
(photo credit: POLICE SPOKESPERSON'S UNIT)
Advertisement
The fact that BBC apologized on Sunday for an outrageously misleading headline describing the tragic murder of Border Police officer Hadas Malka is a sign that some at the BBC still have a grip on reality.But what kind of political perspective drives the BBC and other news outlets to consistently and callously distort the facts when reporting on the Israeli-Palestinian conflict? On the evening of June 16, three Palestinian terrorists from a village near Ramallah carried out a combined attack in Jerusalem. Malka was critically wounded while responding to the incident. She later died of her wound. Four more people were wounded.The BBC initially chose the following headline to describe what had happened: “Three Palestinians killed after deadly stabbing in Jerusalem.” This is also how the BBC described the attack on social media.US President Donald Trump’s son Donald Jr. responded on Twitter sardonically, “You mean after they stabbed a female Israeli police officer to death...right? This is as close to being misleading as possible.”The backlash triggered by the Tweet of Trump forced the BBC to change the headline to “Israeli police woman stabbed to death in Jerusalem.”But this is not the first time the BBC and other news outlets have used grotesquely inappropriate headlines.It seems the BBC draws a moral equivalence between Palestinian terrorist groups and Israel. That’s why the BBC and other news outlets refrain from using the term “terrorism” or “terrorist” when referring to attacks committed by Palestinians against Israelis.The Palestinians who murdered five members of the Fogel family as they slept in 2011 were referred to as “militants” or “attackers”; so were those who butchered worshipers in a Har Nof synagogue in 2014 and those who murdered the parents of the Henkin family in October 2015.The refusal to use the term “terrorist” in the framework of the Israeli-Palestinian conflict is no accident. Groups such as the Popular Front for the Liberation of Palestine and Hamas, which took responsibility for Malka’s death, and the IDF, Israel Police and other Israeli security personnel – including the late Malka – are seen as equally evil.In contrast, when terrorist attacks take place in London, Paris, Brussels, Berlin or other European locations, they are accurately described as precisely what they are: acts of terrorism.As noted by BBC Watch, a group that monitors the BBC’s coverage of Israel-related stories, this moral equivalence between terrorist organizations and Israel is based on a distorted view of the Israeli-Palestinian conflict. In response to a query on BBC’s policy of not using the terms terrorist or terrorism to describe violent attacks by Palestinians against Israelis but using it when the terrorist violence is perpetrated in Europe against Europeans, the BBC explained that, “Where there is an ongoing geopolitical conflict – as in the Middle East – to use the term “terror attack” or similar term might be seen as taking sides. There are those who might consider the actions of the Israeli government to be considered as terrorist acts.”This reasoning is based on moral relativism and a refusal to compare the goals and values of Israeli society and its institutions with those of the terrorist groups that purposely target innocent civilians in an attempt to spread fear, coercion and intimidation. While Israel struggles to maintain a robust democracy, which happens to be a pretty attractive place to live for a foreign correspondent or anyone else, Hamas’s goal is to recreate its vision of a medieval caliphate. Fatah regularly glorifies terrorists and uses violence to repress criticism against the Palestinian Authority’s corrupt and undemocratic leadership.What’s more, Britain is involved in training forces to fight ISIS in Syria and Iraq. So isn’t British society a valid target for disgruntled supporters of ISIS? For the BBC editors, it seems, the deaths of the three Palestinians are morally equivalent to the death of Hadas Malka and therefore just as newsworthy.What is praiseworthy is BBC’s willingness to change the headline, even if only under pressure. Maybe deep down the BBC’s editors and reporters know that the moral equivalence between Israel and the Palestinians – whether it be Hamas in the Gaza Strip or Fatah in the West Bank – does not hold water.