Encountering Peace: Israel - a leader among the nations

While we ask to see, in all the gory details, the destruction and death on the streets of Port-au-Prince, we wish to see none of the human suffering of our Palestinian neighbors in Gaza.

By GERSHON BASKIN
JANUARY 19, 2010 10:03
Search and rescue efforts at the UN headquarters in Haiti
(photo credit: AP)
Advertisement
Humanitarian disasters around the world bring out the best in Israel and in Israelis. The horrific devastation caused by the earthquake in Haiti and the scenes of unbearable human suffering brought about an immediate enlistment of both civilian and public efforts to come to the aid of the poorest nation in the Western hemisphere.The sight of the El Al jet laden with medical aid and almost 200 IDF and civilian personnel brought pride to each and every Israeli and to Jews all over the world. Israel is on the ground in the heart of the disaster and we are making a difference. Our experience and capabilities in providing the world's best humanitarian aid in times of real crisis is something that we can certainly be proud of.Unfortunately our skills and expertise were gained in having to rescue the casualties of terrorism in our own streets and homes. But from that need and from the darkness of those experiences, we spread our goodwill to thousands of innocent victims of nature's mysteries in lands far away where we have no military, strategic or economic interest. 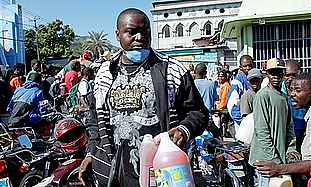