By GREER FAY CASHMAN
JANUARY 20, 2010 00:09
padani akirov
(photo credit: Rafi Deloya)
Advertisement
THERE'S SOCIETY and there's high society. Some 100 Israelis who are friends and supporters of IDC Herzliya rubbed shoulders with Queen Beatrix of the Netherlands and Prince Hassan bin Talal of Jordan at a gala evening in Vienna hosted by its mayor and governor, Dr. Michael Haeupl, in the elegant ballroom of the City Hall. Organized under the title "Europe Builds Bridges in the Middle East," the festive event was dedicated to the Trilateral Center for European Studies, a cooperative project involving the IDC Herzliya, Al-Kuds University in east Jerusalem and the Royal Scientific Society in Amman. The program in Jordan is being conducted under the patronage of Prince Hassan, who in his address castigated European countries for not doing enough to promote the peace process between Israel and the Palestinians. 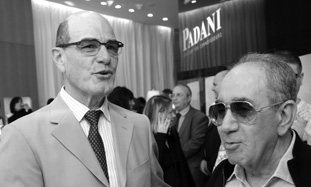