This debate in the Muslim world, prompted by Lebanese-American Rima Fakih’s win of the Miss USA title, is hotter than the two-state vs. one-state debka.

By JPOST.COM STAFF
MAY 26, 2010 15:48
lebanese hottie michigan 311
(photo credit: AP)
Advertisement
Rima Fakih, the new Miss USA, symbolizes everything that’s wrong with the Middle East. But not in the way you might think. The problems her victory raises are not about herself, but rather about the region’s moral hypocrites.I had never heard of Fakih until she won the Miss USA title last week when she beat out a gaggle of blonde, blue-eyed descendants of Vikings. Remember, it was the Vikings who first discovered America and established forever the image of blonde hair and blue eyes as the de facto essence of American beauty. And in America, where perception is reality, beauty and image determines one’s success. Not truth. Not justice.Rima Fakih may have changed all that. A Lebanese-American girl from a Shi’ite family, Rima has dark eyes and jet black hair. She is the first American-Arab to slip through the nation’s color standard (and break through anti-Arab racism) to re-set the definition of American beauty.And that new definition of American beauty could help change America’s definition of peace and justice, too, where perception is often more important than truth, fairness or the law.While some scoff at the idea of beauty pageants, physical appearance is the first level of human recognition and is the focus at the beginning of relationships. How you are perceived sets the tone for future relations with others. It may be superficial, but it is reality.THE SELECTION of Fakih as the symbol of American beauty prompted various responses. For some, Rima’s win simply said “not all Arabs are bad.” In fact, I’d add, some are pretty hot.To others, including right-wing Israelis and Arab religious extremists, she symbolizes a moral corruption that threatens all they hold sacred. Some Israelis denounced her as a Hizbullah Mata Hari. The Arab religious fanatics denounced her as excessively immodest and a threat to all they hold sacred. The fact that she doesn’t wear a burka has them all running to their holy books.The Israeli criticism is political, and not unexpected. The more interesting debate, however, is the one taking place among Arabs. It surrounds the biblical question: “What’s better, if thou wearest a bikini, or if thou 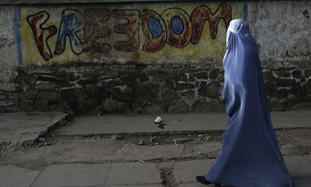 submits to a full burka?” The bikini versus the burka debate is hotter than the two-state versus one-state debka the Arabs are dancing.Fakih wears bikinis and believes in things that are banned in many Arab countries, things like civil rights and free speech. Worse, though, to them is the fact that she is a woman asserting her rights and speaking her mind (and body).They hate beauty unless they can “own it.” So they are not too happy that she has been gyrating her derriere against a pole. No, not against a person of Polish descent, but against a metal pole used at strip clubs by dancers who sometimes entertain rich sheikhs and wealthy Israeli land developers at the bars and casinos of Las Vegas and Monaco.Gyration of any part of the human body is considered haram, or a sin in Arab culture. It’s taken Arab sheikhs hours on hours of watching those sinful practices to come to that conclusion.BUT I think if a woman wants to wear a burka and erase her identity just to make her husband and every male member of her family, village and country happy, that’s her choice. It may be a poor choice, but it’s hers nonetheless. My guess is that in most cases, it isn’t a choice at all but an imposition by the legions of closed-minded hypocrites among the Middle East’s moral majority.Yet, if wearing a burka is a choice, then why isn’t wearing a bikini also a choice?It just might be the kind of Middle East debate that could bring new life to the paralyzed Arab League, which has been sidelined by its failure to do anything about Palestinian rights in Israel or Arab rights in the rest of the world.Debate over Rima Fakih might launch a new revolution prompting Arab women to throw off their burkas, kick off their sandals, and do the hootchie cootchie – which was made famous at the 1893 Chicago World’s Fair. That was the last time the West fell in love with the image of an Arab sheikh riding across the desert sands on a white stallion.It was there that Arabs discovered that people from the West would pay anything for the things they want. Exorbitant prices for “Holy Land” olive-wood junk. Don’t blame the Arabs for having learned from the West that they shouldn’t give their oil away.Rima Fakih is beautiful. Rima Fakih is hot. She could be my fourth wifeany day. If the Arabs were smart, they would replace their failedleadership with Rima Fakih and let her negotiate Middle East peace. Shewould do far better than we have so far.Imagine how different negotiations with Ehud Barak might have ended in2000 had Rima Fakih been at the negotiating table instead of YasserArafat. She’d have blinked her long eyelashes and Barak would havesurrendered, offering to share Jerusalem and even work out a fair dealover the Palestinian refugees. Who knows? The conversation might also have turned toward Barak’s collection of dresses.We know what happened when Arafat blinked.The writer is an award-winning Palestinian-American columnist. www.YallaPeace.com
rghanania@gmail.com