“My mind was blown. The values of Israelis align with my own. It was a huge misunderstanding on my part.” 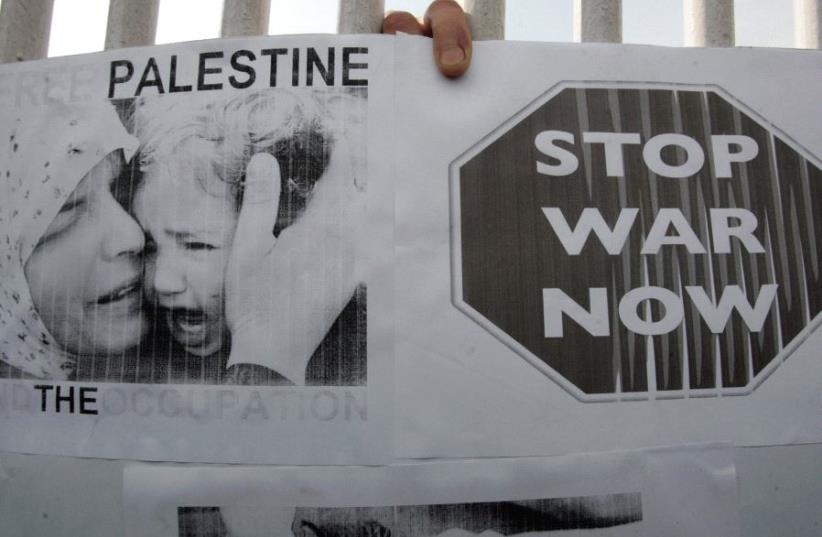 A PROTEST against Israel on a campus in India. Around the world students have faced calls for boycotting the Jewish State.
(photo credit: REUTERS)
Advertisement
What’s the antidote to the global anti-Israel Boycott, Divestment and Sanctions (BDS) threat on college campuses? For Joel Greenberg, a founder of one of the world’s largest privately held investment firms, it’s making sure students understand that Israeli soldiers aren’t like the enemy combatants in Star Wars.“You can talk all you want, give them all the books in the bag, but unless the person is there talking to Israelis and talking to people in the IDF their own age who are clearly not the next wave of stormtroopers, well, that’s the most important thing I do. That’s why I put so much effort into it,” Greenberg told an audience in Los Angeles.Greenberg, who once hunted Nazi war criminals for the US Office of Special Investigations, was among the prominent speakers who addressed a gathering of more than 250 people early in March for an annual summit described by its organizers as the first large-scale national conference devoted exclusively to the issue of tackling BDS.Hosted by the pro-Israel education organization StandWithUs, the “Combating the Boycott Movement Against Israel” conference draws representatives from Jewish and pro-Israel advocacy groups as well as other activists. Conference sessions featured a wide array of experts on BDS and its ramifications for communities, businesses, culture and the law. But the central focus was the threat pro-Israel students face on college campuses and cultivating student efforts to stem the threat.Famed Harvard Law School professor Alan Dershowitz, who delivered the conference’s opening remarks, told the Haym Solomon Center that the BDS approach on campuses “mis-educates future leaders.”“It portrays Israel as the only country in the world that should be subject to the economic death penalty of BDS. Even though it fails on college campuses to achieve the specific results, it propagandizes young future leaders,” he said.Tamar Lyons, 21, a second-year media production student at Ryerson University in Toronto, spoke on a panel about how BDS influence in student government circles fuels antisemitism.She described feeling “helpless and hurt” while waiting in line to speak at a campus divestment hearing, as ranking members of the Students for Justice in Palestine group bullied her, calling her “a problematic Zionist” and saying there were “too many of you here,” with “you” referring to Jews.In response, Lyons and other Jewish student leaders lobbied elected student government officials and university heads to address antisemitism on campus. They succeeded in getting Ryerson to fund an International Holocaust Remembrance Day event meant to show solidarity with Jewish students and faculty members.The conference also addressed the issue of students facing unlawful treatment.Yael Lerman, an attorney and director of the StandWithUs legal department, detailed her efforts to offer students free legal counsel. In 2016, Lerman’s team, more than 130 pro bono attorneys, handled more than 200 requests for legal services.“Nearly 60% came from colleges in the US and Canada concerning issues such as harassment of pro-Israel students, disruption of pro-Israel speakers, and fighting divestment resolutions and referendums,” she said.Trent Coyle, a sophomore at New York’s Baruch College who isn’t Jewish, described his experiences on a trip to Israel last year that was sponsored by a leadership- and development-focused Israeli NGO.“My mind was blown. The values of Israelis align with my own. It was a huge misunderstanding on my part,” said the 34-year-old Coyle, a US Army veteran who did tours in Iraq and Afghanistan, referring to his previous views on the Israeli-Palestinian conflict.A message imparted throughout the conference was the need to engage students prior to their arrival on campuses.“We need them to learn the facts before they enter these campus environments,” StandWithUs CEO Roz Rothstein said. “We must start early.”One success story for StandWithUs in that realm is Reed Hasson, one of a handful of Jewish high school students at the conference. A 17-year-old junior, Hasson attends a mostly black and Hispanic high school in a Los Angeles suburb. With the help of the StandWithUs research and strategy team, he is planning a program for his fellow students on anti-Israel media bias.Hasson said that attending the conference “inspires me to go out and change something, because I see there’s something wrong on these college campuses. I feel motivated to change that. I’m not scared about going off to college. I’m more motivated to change what I see wrong.”Rothstein praised efforts like Hasson’s and urged continued outreach to minority groups or individuals whose views on Israel run the gamut from unaware to antagonistic.“How many of you make it a point to reach out to someone that’s different?” she said. “We need to reach out to diverse audiences. The difference between them and us is intent. Our purpose is to bring people together, to teach them about Israel.”The author is a contributor to the Haym Salomon Center, a news and public policy group.