Along with the rest of us, and according to the Psalm, Dad always set Jerusalem above his chiefest joys. 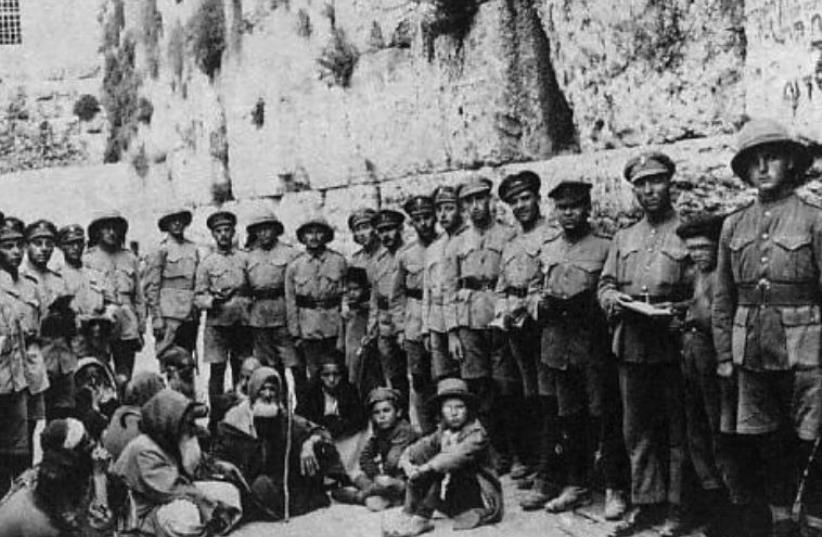 Jewish Legion soldiers at the Western Wall after the British take-over of Jerusalem, December 1917.
(photo credit: Wikimedia Commons)
Advertisement
1860 was the year before Civil War broke out in America. It was also the year my great-grandfather walked to Jerusalem from Russia. How do I know? A few years ago, I found an old audio cassette lurking in a drawer. It was marked, “David Segal talks about Jerusalem – Me’onot Maccabi 1990.” We looked for something that would play the old relic. And then I had the eerie and emotional experience of hearing my father (who has been gone about 11 years) tell some of his Jerusalem stories. Dad was born in Jerusalem just over 100 years ago.The tape began with the description of Dad’s grandfather’s trek from Russia at age 14. Saba Yitzhak Isaac and three of his friends fled to escape the Russian army, which was recruiting boys of that age. So these three boys left the yeshiva. They slept in synagogue study halls all through Russia and eventually got to the Black Sea. There they boarded a boat, and for about three months sailed to Jaffa and then went on to Jerusalem.Jerusalem at that time was a neglected part of the Ottoman Empire. It was actually divided up by consulates: the Austrians would take care of Austrian citizens; the Russians took care of the Russians, and so on. Because Isaac had arrived illegally, he couldn’t register with the consulate. A few years later, he was sent back to Russia to raise money for the yeshivot in Jerusalem. At that point he met and married Hanna Beila, and they returned to Jerusalem. Since he was illegal in those years, he probably couldn’t even get mail. (The consulates distributed mail, too.) One of the points Dad made in his talk had to do with the false claim that we hear over and over: “Before the Zionists arrived, Arabs and Jews lived together in peace and harmony.” My grandfather, Dad’s father, was born in Jerusalem in 1884. When he was five or six, his father would walk him to heder (Jewish children’s school) every day. They had to go through the Arab shuk. One day a gang of big boys set upon them and started beating up the child. The Arab shopkeepers were sitting in the doorways of their shops, much as they do today. My great-grandfather – who shopped in these very stores – shouted to these people and asked them to call the gang off. The shopkeepers just laughed. He finally told the boys to leave the child alone and hit him instead. They were happy to oblige, knocking him down and cutting off his beard until it bled. The shopkeepers were still laughing.There are many stories. The tape went on for about 45 minutes. I cherry-picked a few items just for the flavor of Jerusalem in those years. There was the story about Isaac being invited to go with Yoel Moshe Salomon and Yehuda Raab to see if he might be interested in buying land in a place that later became Petah Tikva. So he rode with them. When they got back he said, “Nothing will come of this,” and invested his savings in Russian rubles. Which became worthless just a few years later at the time of the Russian Revolution.There were stories of Dad’s school life. Stories about the family having to pay a ransom, more than once, to get my grandfather out of the Turkish Army. This trick in the end didn’t work.Dad, as a boy, watched the ragged, defeated Turkish soldiers at the end of World War I, straggling through Jerusalem on their long walk home to Turkey – and begging for bread. “Ekmek, ekmek.” WWI brought the famine that engulfed the whole Middle East. Many of the crops had been destroyed in the battles. The great famine of those years caused Dad’s family to leave Jerusalem and go to America. But they had to leave Dad behind, because at the age of 12 or so, he contracted trachoma. The US immigration officers sent back to their point of origin anyone who had that disease. So Dad remained in Jerusalem with his cousins and was treated by Dr. Abraham Albert Ticho.My father had to undergo very painful treatments. The famous artist Anna Ticho was her husband’s nurse in those years. She had to hold Dad down while the doctor treated him.“From all over the Middle East,” said Dad, “came sheikhs, princes and ordinary Arabs to be treated by this famous good man.” Dr. Ticho’s patients didn’t always pay in cash for the saving of their eyesight. Sometimes it was a team of horses or a couple of camels or just two chickens. A rumor once flew around Jerusalem that a very grateful Sheikh offered to give Dr. Ticho his prettiest wife. Anna Ticho objected. In 1936, Dr. Ticho was attacked by an Arab with a knife.As a boy, Dad was an uninvited guest at the cornerstone-laying ceremony of the Hebrew University on Mount Scopus. For days, there were posters around the town announcing the time and the place. Dad and his pals did what any young kids would do. They climbed a tree and took a look.This article is written in loving memory of my father, David Segal. And in honor of the day of the reunification of Jerusalem, our eternal and beloved capital. Along with the rest of us, and according to the Psalm, Dad always set Jerusalem above his chiefest joys.The author, Thelma Jacobson, married to Ira for more than half a century, is a great-grandmother with a passion for writing (see the letters column from time to time) and minor passion for crocheting and gardening. Having grown up in Connecticut, she now lives with the breathtaking privilege of raising her family (and now watching her children raise theirs!) here in our own wonderful and exasperating country.