Slander and incitement are favorite ploys of both the extreme (and sometimes not so extreme) Right and Left everywhere. 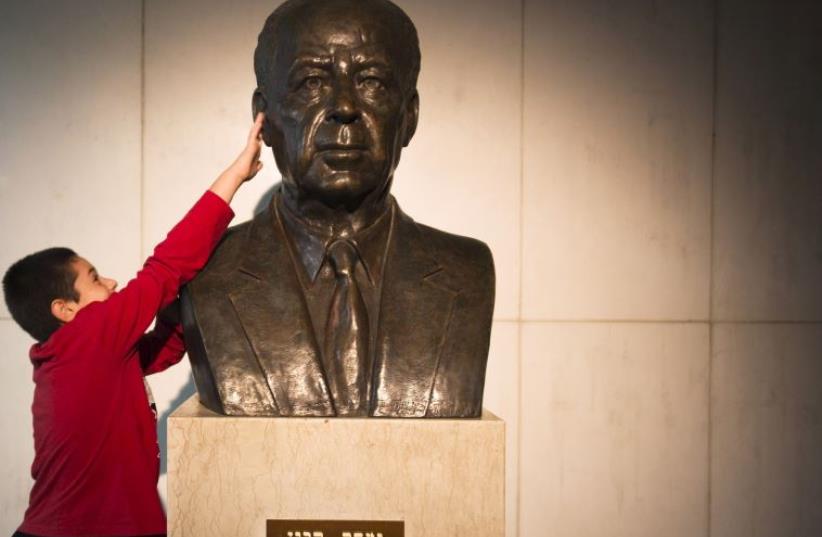 A boy touches the bust of Yitzhak Rabin before a rally commemorating the 20th anniversary of his assassination in Tel Aviv, October 31
(photo credit: REUTERS)
Advertisement
The New Israel Fund’s campaign against the proposed NGO transparency bill, featuring a photograph of Yitzhak Rabin under the provocative slogan “A plant [i.e. foreign agent] with whom they have already dealt with” - is not only a nadir in tactlessness (one wonders why the Rabin family hasn’t yet lodged a protest), but more reprehensibly, a willful attempt at wholesale slander of all those, probably a majority of Israelis, who are opposed to foreign-financed political activities - especially those involving spreading noxious propaganda abroad against the IDF.Another case which has recently come to light thanks to the forthright journalism of investigative reporter Ilana Dayan was that of an organization allegedly responsible for criminally revealing to the Palestinian Authority the identities of Palestinians selling land to Israelis, thus making them targets for torture and assassination. And then there are the self-anointed “human rights” and “peace” groups.But to return to the shameless misuse of Rabin’s image - the “they” in the slogan refers to whom? All those who don’t favor the opinions of the extreme Left? Those who in the light of experience may perhaps not have been completely wrong in opposing the Oslo agreements at the time - who hold that the absence of peace is not exclusively Israel’s fault, etc., etc.? In fact, what the slogan does is implicitly paint all Israelis who do not share the Left’s positions on the Palestinian conflict with the brush of Yigal Amir, Rabin’s despicable assassin. This is the well-known tactic of McCarthyism: guilt by fabricated association. Slander and incitement are favorite ploys of both the extreme (and sometimes not so extreme) Right and Left everywhere. In Israel this goes back a long time. In the Sixties, the mandarins of the Labor Party put David Ben-Gurion, the party’s founder, on “trial” before a “Feme court,” accusing him of all sorts of political misdeeds, as well as neo-fascism, no less! The party’s then-propagandist, Yossi Sarid, even blamed Ben-Gurion for purportedly hating North African immigrants.As to the New Israel Fund, its vendetta is not just a matter of falsifying history but also of blemishing the reputation of a leader whose record, in addition to the prime ministership, includes his service as defense minister, IDF chief of staff during the Six Day War and in the Palmach in the War of Independence. Some of his political decisions were controversial, but he certainly was no leftist of the ilk of NGO B’Tselem, which he castigated for endangering Israel’s anti-terrorism efforts.Furthermore, he had few illusions, if any, about the Palestinians’ commitment to peace - especially where Yasser Arafat was concerned. Presenting him retroactively as if his views had any similarity with those espoused by the NIF and its foreign bankrollers is an insult to his memory and to the public’s intelligence. Ironically, had Rabin been alive today, he would probably also have been an object of the above groups’ censuring diatribes.The purpose of the proposed NGO transparency legislation against which the extreme Left has opened its floodgates is actually quite simple. What it does not do is block any of the NGOs’ legitimate activities, even if financed from abroad – nor should it. It does not distinguish between Left and Right. In its present form it does not require its activists to pin a special badge on their clothes to identify them (this was a revolting idea which was done away with by the prime minister).Similar to the American Foreign Agents Registration Act (FARA) though less stringent, it basically requires (as Jan Sokolsky has explained in his learned article in this paper) that persons or groups who receive substantial funding from foreign sources, especially sources directly or indirectly linked to foreign governments, and are engaged in political activities should disclose this to the parties they contact and to the public at large – as legality and transparency in a democratic system requires.One cogent question which arises is why foreign parties would even be interested in providing financial and political support to Israeli extreme leftist activists – and the answer may be found in the description by Ambassador Dennis Ross in his new book, Doomed to Succeed, of a video conference in which he participated, between US President Barack Obama and British Prime Minister David Cameron, French president Nicolas Sarkozy and German Chancellor Angela Merkel. As Ross recounts, after a very brief review of other matters, the European leaders quickly “launched” into a diatribe against Benjamin Netanyahu, with a venom seldom heard when leaders talk about other leaders. They took turns excoriating him, for “threatening all of our interests in the region.”And Ross concludes: they made it clear that “if Obama did not...force Netanyahu’s hand they would do so.”None of the above leaders, by any stretch of the imagination, could be accused of anti-Semitism or anti-Israelism - but they may believe that as their countries had acknowledged (some more, some less) their debt to the Jewish people, they were now entitled to freely criticize some of the activities of the State of Israel. Whether they truly believe that changing Israel’s policies would actually move the peace process forward, or - as they admitted - are acting out of concern for “all their interests in the region” - they intend to push Israel’s policies in a direction which does not always conform with those of the country’s democratically elected government - but which does conform with the political agendas of certain Israeli organizations whose activities, they believe, thus deserve overt or covert financial support.In fairness, the above governments are not necessarily the main offenders, but by virtue of their leading role in the EU (at least till Brexit) they bear special responsibility.Be this as it may, in an open society like Israel’s, the public has a right to know about it.The author is a former ambassador to the US.