Let’s start with the bottom line: the Palestinians don’t want their own state. 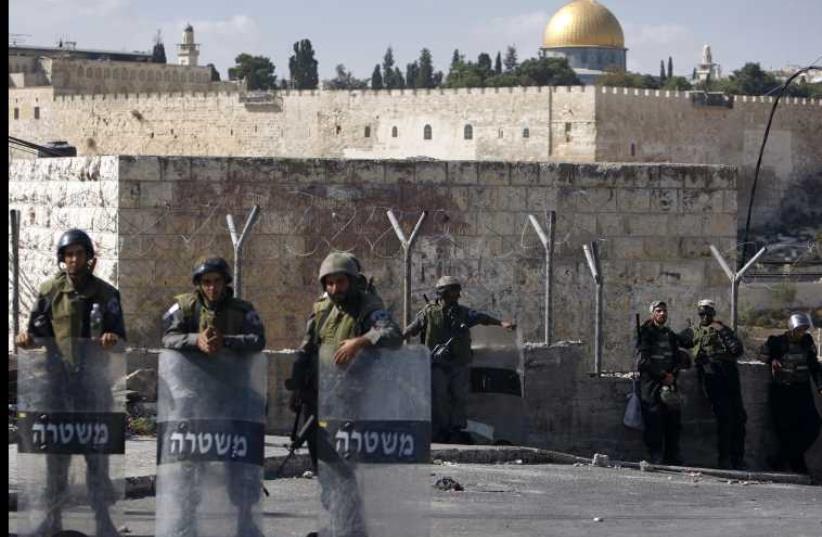 The Dome of the Rock is seen in the background as Israeli border police officers stand guard
(photo credit: REUTERS)
Advertisement
Let’s start with the bottom line: the Palestinians don’t want their own state.How do we know? If they wanted a state, they would have had one long ago. For years they could have had a state with territorial continuity on the land defined as Area A and Area B, and maybe even more, as well as the whole of the Gaza Strip.The Palestinians choose not to declare this their state. If they did, the whole world, including Israel, would recognize it, and they could continue to insist on sovereignty over the rest of the West Bank as the subject of future negotiations. But the people who profess to be dreaming of a state of their own are too busy with other things.See the latest opinion pieces on our page
The Palestinians continue to maintain their traditional, unprofitable position: all or nothing. Either all the territory within the June 4, 1967, borders, the right of return of the descendants of Palestinian refugees to Israel, and a “Jewfree” West Bank, or nothing.They know perfectly well that these demands are unacceptable, and even if they managed to find some deranged Israeli who would agree to them just to put an end to the conflict, they’d come up with some new demand.What do the Palestinians really want? They want to intermingle with us and enjoy the benefits of Zionism, the quality of life, the modern health services and all the rest of the good stuff, which can be found nowhere in the Middle East except Israel. They want to tie themselves to our apron strings and still feel free. Every Palestinian’s fondest dream is an Israeli identity card, period.That’s why they protest against the fence, even if it’s built precisely on the Green Line, the ’67 border. They don’t want to be alone; they want to be with us. A state of their own, independent of Israel, will look like Gaza, and they know it.For the sake of argument, let’s assume that a new theological truth was revealed and it turned out that the Holy Land promised to the patriarchs was actually Tasmania. All the Jews packed their bags and left Israel to build the Third Temple in Hobart, the capital of Holy Tasmania, south of the Australian mainland.What would happen here? There would be a bloodbath, savage infighting in the finest tradition of the short Palestinian history. The whole area would become something like “metropolitan Gaza,” an impoverished state with the same sorry standard of living as the other countries in the region. At some stage, Egypt would advance northward and the lunatics of the various tribes of Islamic State would move southward, and that would be that. Palestinian nationalism, a by-product of Zionism, would wither away like a parasitic plant left on its own, without a host plant to live off of.This is the simple truth, even if it isn’t politically correct to say it out loud. After all, nobody wants to appear patronizing. But it’s much more patronizing and condescending to project our own mentality on our neighbors, as some of us are prone to do, and then they’re surprised every time it doesn’t pan out. Our neighbors don’t think like us, they’re motivated by different aspirations, and that fact has to be internalized.What should we do about this truth? Our aim is a country of our own, without them. We can’t relinquish all the territory they demand, but we can’t fight the whole world either.We don’t have a lot of wiggle room, but we do have some.The far Right is wrong to believe that we can ignore millions of Palestinians, and the rest of the world as well. The far Left is wrong to believe that a peace agreement, an end to the conflict, and good Scandinavian- style relations with our neighbors are possible. The Palestinians are pulling the wool over everyone’s eyes. We have to act wisely and expose the bluff.Translated from the Hebrew by Sara Kitai, [email protected]