Facing the reality of intermarriage and assimilation in Israel

A few recent conversations I had with close friends demonstrated to me that intermarriage is all too real in Israel. 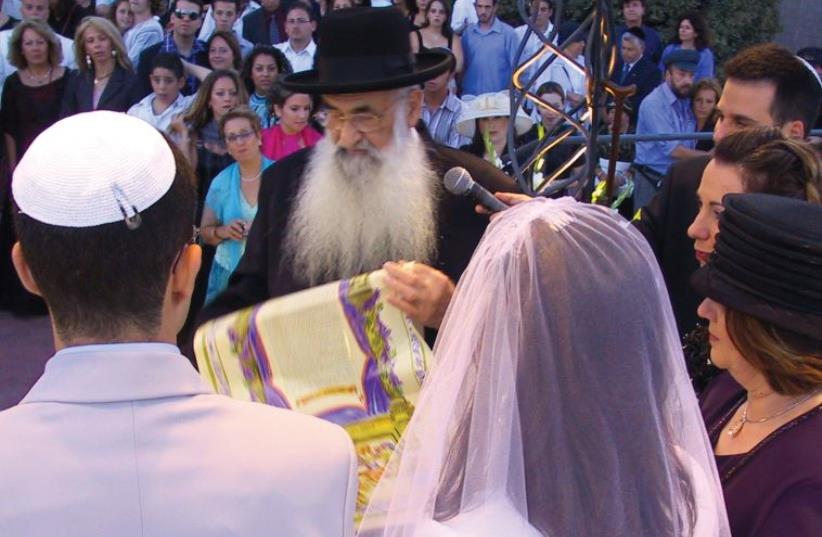 A Jewish wedding.
(photo credit: ILLUSTRATIVE PHOTO: WWW.GOISRAEL.COM)
Advertisement
Two years ago, Israel’s Supreme Court, in its ruling on a very difficult conversion case – sadly one of many that have not been resolved adequately – demanded that the Israeli government create laws that would standardize conversions. The current intolerable situation has meant that the complete mandate for conversions, which is such an important issue in Israel and the Jewish world, has been at the discretion of the Chief Rabbinate.Sadly, the government, especially this one, has no intention or interest in dealing with the issue, which leaves so many Israelis who want to join our people, serve in the IDF, and contribute to this country, in agonizing limbo.Moreover, the longer this issue is unresolved, the more of a problem it will be for Israel’s Jewish future.For the first time, Israel and the Diaspora, specifically the US, share a concern about assimilation and intermarriage.A few recent conversations I had with close friends demonstrated to me that intermarriage is all too real in Israel.
See the latest opinion pieces on our page
Many of these friends are religious-Zionist Jews and they will have halachically non-Jewish grandchildren. Some told me that their daughters-in-law have tried to convert on numerous occasions, but were turned off or turned away by an increasingly coercive rabbinate.Just in case one might assume that my groups of friends are statistically unrepresentative, just think that 8 percent of the so-called “Jewish population” in Israel is not in fact Jewish and there are well over 100,000 Israelis below the age of 18 who are not halachically Jewish, but whose parents came under the Law of Return.We cannot leave this problem to our children, but must act now, because this phenomenon has the ability to have a lasting effect on Israel as the national homeland of the Jewish people.During the last Knesset, I introduced a law that was intended to make conversion less problematic and bureaucratic, and allow municipal rabbis to establish their own conversion courts. It would also have made it illegal to discriminate against converts and would end the unacceptably frightening prospect of voiding conversions after they are performed.The Chief Rabbinate would no longer be the central entity controlling conversion, but will be reduced to a largely regulatory body in charge of testing and licensing rabbis who wish to perform conversions.Unfortunately, this and other reforms relating to religion and state are to be undone in the current coalition owing to the demands made by the ultra-Orthodox parties, with the cooperation of the prime minister and the quiet acquiescence of the national-religious Bayit Yehudi party.However, Israel’s Jewish future should not be hijacked as a mere political demand in coalition negotiations.We need to create a new movement that demands a restructuring of the religious institutions in Israel and makes them more in line with Jewish law and Zionist ethos.Perhaps we should revisit the concept of zera yisrael (seed of Israel) in a more serious manner. According to many halachic sources, the children of a Jewish father are not gentiles in the full sense and we may seek their conversion.Rabbi Benzion Uziel, the first Sephardi chief rabbi of Israel, ruled that when a Jewish father brings his young male child from a gentile mother to a religious court for conversion, the court is duty-bound to convert him. Even Rabbi Moshe Isserles, the Rama, cites the famed Tosafist known as the Ohr Zarua, who speculated as to whether a son born to a gentile mother and Jewish father is considered to be in the category of one who is at least “rabbinically Jewish,” even though he is not Jewish biblically .In 21st-century Israel, we have adopted a rigid form of Judaism unknown to our ancestors who sought answers to difficult questions by taking into account differing opinions and circumstances.Unfortunately, our beautiful traditions have become tainted in the eyes of many secular Israelis, whose only interaction sometimes is through the authorities who mandate marriage, divorce, burial, and kashrut. We need a strong reconsideration as to how to use these very same issues to include, rather than exclude, and unite around our identity rather than it be used as a point of division.This form of Judaism has also become a divisive identity for many of our children in seeking to extol the meaning of Zionism as we move towards the third generation since the reestablishment of Jewish sovereignty in our ancestral homeland.However, unless we make Judaism more accessible and welcoming, this principle will be lost on future generations and they will begin to question why we fight to remain here in an increasingly tortuous Middle East. We need to ensure that every Israeli, and every Jew, finds their place in the Jewish state and feels secure in their peoplehood in a welcoming manner.To begin this return to normative Judaism, we need to deal with the important question of what do with those who sincerely want to join our people.Once again, the Supreme Court is forced to deal with an issue of conversion, this time, the nine year wait of Martina Ragacova to have her Orthodox conversion recognized by the State of Israel. The panel of nine Supreme Court Justices have termed this case a “tragedy,” not just for Ragacova, but unless properly and completely resolved, for the entire Jewish people.The writer was a member of the 19th Knesset and the founder of the Nativ program, which has facilitated the conversion of more than 8,500 young Israelis during and after their army service.