Corona has created opportunities for individuals, communities and countries, exposing issues that can no longer be swept under the rug of reality

THE WRITER, then serving as MK, poses for a portrait at the Knesset last year. Olim are acutely aware and prepared to ask critical questions.
(photo credit: FLASH90)
Advertisement

Learned helplessness is a mental state in which an individual or entity becomes unable or unwilling to avoid adverse situations that they have had to cope or contend with repeatedly, as a result of negative conditioned learning.

Essentially, based on past experiences of “helpless” feelings of negativity, an individual or entity become more likely to “learn” that they should not try new things for fear of failure or rejection, generating a cycle of self-defeatist thinking, affecting and limiting action. Individuals, communities or countries caught in this cycle suffer not only from low motivation but result in reduced productivity. Ultimately, in a cyclical continuum, learned helplessness is not only debilitating but creates hopelessness.

That is an antithetical, polar opposite description of olim, who emigrate to Israel filled with excitement, positivity, resolve and hope, while leaving all behind – home, family and community. We do so not naively, but in order to realize a vision and mission and partake in the return of our people to an ancestral homeland after millennia of exile and persecution, amid thriving life and development; to participate in constructing the foundational layers for our peoples’ sustainable continuity and growth.

Whereas founding mothers and fathers of previous generations laid down the physical infrastructure of the miraculous state – still very much an integral part of that founding generation, just as they have done for the previous 73 years – olim carry with them the bricks and mortar needed for the construction of the next critical tier: creating the spiritual or values layer.

Olim bring with them insights and experiences that are vital at this particular junction in the evolution of Israel, in her relationship with global Jewry, and in relaying and relating to the international community. Their voice is imperative to address critical questions emanating from foundational principles anchored in the Declaration of Independence: what it means to have a sovereign nation-state not only geographically but consciously; what it means to be the majority, in a country committed to equality for all its minorities; how to mediate the intersection between Jewish and democratic foundational principles; and what it takes to fulfill Israel’s vision and mission of nation-state, when half of us are here and the rest are world over. 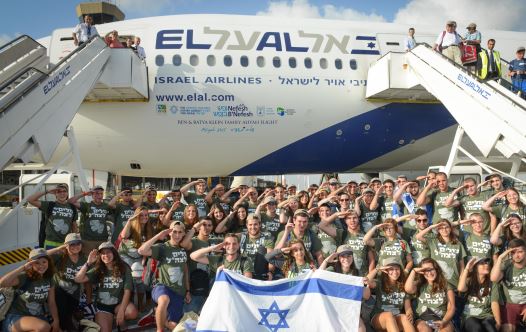 Olim also comprehend the importance of separation of powers, of good governance, of transparency, and bring vision-inspired long-term, forward-thinking plans and holistic policies that are clearly communicated and consistently implemented in every area of life. Having the capacity to see Israel from the outside in, olim are acutely aware of and prepared to ask critical questions, which are the ability and responsibility of this generation to identify, pose, diagnose, prioritize and address.

It is this recognition that must guide olim in how we conduct ourselves, harnessing our strengths to become part of the solution, enabling and empowering change and success. It is at this moment of urgency, for internal resiliency, relations with global Jewry and Israel’s international standing that the ‘live bridge’ of olim must rise to the challenge, identifying the ability, capability, and responsibility to ‘lean in’ and lead forward.

For that to happen, it is imperative to identify, recognize and unlearn any possible learned helplessness resulting from decades of a “melting pot,” “‘perhaps we are fryerim” mentality. It is imperative to recognize that the multiplicity of identities, diversity of viewpoints and the mosaic comprising Israeli society and the Jewish people are the way forward, and that engaging in discussion, even if it is difficult, is the vehicle for change. For that to happen, we must become the change we want to see, not limited to reactive, individual, watchdog culture but rather to zoom out and see the big picture: identifying, prioritizing and proposing a systemic change that models precisely the understanding that is unique to those who benefited from a democratic perspective.

Corona has created opportunities for individuals, communities and countries, exposing issues that can no longer be swept under the rug of reality. Mental health, education, digital platforms, scientific advance, social and professional mobility, and many more issues have been presented and must not be ignored. Alongside the unique challenges of olim exacerbated by corona travel restrictions and implications is the historic opportunity to lead a vital paradigm shift that will create a systemic change in which Israel will no longer function reactively – putting out fires, treating individual cases – but rather, in the words of the late Rabbi Sacks, recognize “the dignity of difference” for the strength and value it brings. This will represent, empower, anticipate and consider implications of decision-making processes and results ahead of time.

The Nefesh B’Nefesh Institute for Aliyah Strategy and Policy is committed to precisely that. It aims to take the perhaps longer path, leading to systemic change rather than clickbait, immediate satisfaction, one-off tactics. Based on 20 years of experience and complimenting continued everyday assistance and facilitation that Nefesh B’Nefesh was founded upon and continues to provide, the Institute will turn challenge into opportunity. Shining a spotlight on the tremendous impact olim have had and continue to have on the State of Israel and the relationship with global Jewry, it aims to empower immigrants, acknowledging and making their collective contribution accessible to mainstream Israeli public, media and decision-makers; and for reaching across borders and oceans to engage global Jewry.

This triple-action strategy harbors the potential of being a vehicle for change, unlearning learned helplessness that is debilitating on so many levels; for creating individual and collective competency to cope with adverse situations; for creating successes and opportunities for positive conditioned learning; for empowering the optimistic outlook integral and natural to olim; for removing hurdles or limits and increasing motivation and productivity; and above all: for renewing and fueling hope, imperative to enabling and propelling change for a better future.

In a country of immigrants, we invite all to join and partake in this exciting journey.

The writer is an international law and human rights expert, head of the Nefesh B’Nefesh Institute for Aliyah Strategy & Policy, and scholar-in-residence at JFNA. She is a candidate for chairperson of the Jewish Agency and was a member of Israel’s 23rd Knesset.