First Mosul, Now Raqqa: ISIS is on the run

The ultimate goal of ISIS is to take over the world. 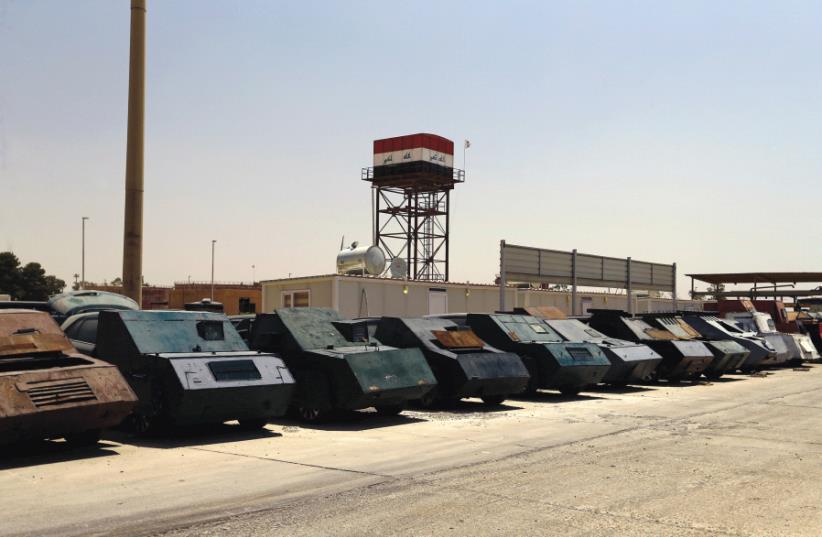 SPOILS OF war. Islamic State vehicles captured by the Iraqi army.
(photo credit: REUTERS)
Advertisement
Now that Mosul, the Islamic State capital in Iraq, has been liberated and ISIS is on the run, our attention needs to focus on Syria.Specifically, the city of Raqqa.The ISIS capital in Syria was always thought to be Raqqa. It was news emanating from Raqqa that gave us the first reports that ISIS leader Abu Bakr al-Baghdadi may have been killed by the Russians, as they had claimed, on June 16. Actually, Baghdadi’s demise was announced on June 16, but they backdated the date of his death to a Russian air strike on May 28. That being said, the ISIS leader’s death has yet to be confirmed in a convincing way.Raqqa is a bastion of ISIS power and a presence. But how much of a presence is the vexing question.We have been told that Raqqa was the world capital of ISIS activities. We were told that ISIS was running its international terrorist operation from Raqqa. But from the websites and the ISIS-produced videos it appeared that the operations and the propaganda were emanating from Mosul. Raqqa was not at all the center of those activities.For the longest time, neither the US nor Russia were seriously attacking or even strategizing on how to offer aid to other actors attacking Raqqa. In October of 2016 then-US defense secretary Ash Carter spoke of beginning the assault on Raqqa. There was announcement after announcement and press report after press report that the US was going to invade Raqqa – but nothing happened. Until now.After the fall of Mosul, it finally happened.The best intel on Raqqa puts about 300-500 ISIS fighters in the city. Flushing out 500 ISIS fighters would be an easy task, especially for the YPG, the Syrian Kurdish militia. But the YPG does not want to run point in Raqqa for the same reason the Kurds did not want to run point in Mosul. Let other fighters who are getting more support from the US and from the Iranians risk their fighters.So now it is up to the US and the Russians, specifically their air forces. The SDF, the Syrian Democratic Forces, will mount the ground fight without the leadership of the Kurds. Playing a less dramatic role are some Kurdish fighters battling in the area around Raqqa. This past week two American and one British volunteer, fighting alongside the Kurds, were killed in a surprise ambush a counter-attack by ISIS.The battle is on. It is raging. And there are about 70,000 civilians trapped in Raqqa being used as human shields by the remaining ISIS fighters holed up in the city. But now that a serious attack on Raqqa has begun, the end is in sight. There is no doubt ISIS will be destroyed in Raqqa and the city will be returned to its citizens.ISIS had to know that it would be removed – forcibly removed – from Mosul and Raqqa.Which begs the question of where ISIS is going.There is an ISIS tradition of fleeing and then popping up somewhere new. Mosul, Raqqa and now even in the Syrian Golan Heights close to the Israeli border. And that explains the puzzling question of why Israel has been involved in empowering local Syrian tribal leaders to fend off and repel ISIS. An ISIS-free Syrian Golan is in the mutual interest of both Israel and local Syrians.ISIS fighters also wind their way to other established Arab headquarters, especially Yemen and Libya. And some defeated ISIS fighters go home.They go back to wherever they came from – which is all over the world.The ultimate goal of ISIS is to take over the world.Once ISIS realized it was going to lose Mosul and Raqqa and that recruitment numbers were falling, it switched priorities. The message to potential ISIS fighters today is stay home. We need you more where you are. Perpetrate attacks where you live.You will be more successful at home than away from home. Don’t come to Syria and Iraq. Don’t come to Yemen or Libya. Carry out your attacks, promote the ISIS cause at home.That has become the new ISIS goal. ISIS is now engaged in a jihad as a global network, loosely woven together and united via social media and Youtube.ISIS is no longer interested in simply governing a swath of land. While it will certainly try to establish another capital someplace, someday, for now land is merely a vehicle it can use to perpetrate terrorism and gather greater influence. For now, it’s worldwide terrorism and worldwide influence. The world is its proverbial oyster – it is theirs to terrorize.

The author is a political commentator. He hosts the TV show Thinking Out Loud on JBS TV. Follow him on Twitter @MicahHalpern.